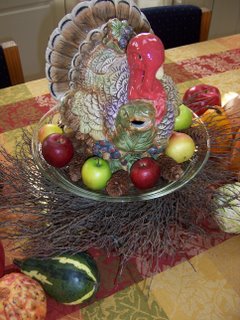 Thanksgiving blessings and good feasting to all on this day! As I travel over the river and through the woods to central Pennsylvania for the family dinner today, I thought I’d dish out some turkey trivia for all to consider as you make your way to the Thanksgiving table.

“A Much More Respectable Bird … A Bird of Courage,” A Short History of the Turkey by Andrew G. Gardiner, Colonial Williamsburg, Holiday 2006, Volume XXVIII, Number 5.

Posted by T.W. Barritt at Culinary Types at 3:36 AM