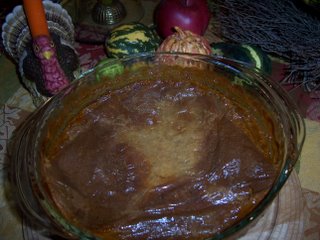 This is a very old recipe that appears in many books and pamphlets. A version is even referenced in “American Cookery” by Amelia Simmons, which was the first American cookbook, published in 1796. I decided to bake this as one of my contributions to the family Thanksgiving meal because it is simple and uses lots of wonderful old-fashioned ingredients and flavors that would have been readily available to the early colonists.

The name may seem a bit outdated, but the reference in “American Cookery” mentions “Indian Meal” as an ingredient, so I suspect that was the term used for corn meal and it would certainly follow the various stories that say the Native Americans taught the colonists how to plant and cook with corn.

The corn meal used is actually just a thickener. The recipes include the unusual step of pouring a cup of milk over the pudding after it has baked for half an hour. The pudding bakes in a 300 degree oven for two hours total and the house fills with the aromas of delicate cinnamon, ginger and the robust malt of molasses.

You start by scalding three cups of milk in a saucepan. Combine four tablespoons of cornmeal with 1/3 cup of molasses and stir into the hot milk. Cook, stirring constantly with a whisk, until the mixture thickens and coats a spoon. Remove from the flame and whisk in a ½ cup sugar, 1 beaten egg, butter “the size of a walnut” (which for me was three tablespoons), ¼ teaspoon salt, ½ teaspoon ground ginger and ½ teaspoon cinnamon. Pour into a buttered casserole dish and bake for ½ hour at 300 degrees. Pour one cup of milk over the pudding and continue to bake for two more hours at the same temperature.

Most of the recipes recommend serving with heavy cream or ice cream!
© 2006 T.W. Barritt All Rights Reserved
Posted by T.W. Barritt at Culinary Types at 10:16 PM

I have had this before and really love it....you don't see many people making this much...it is delicious1 Enjoy reading your blog, thanks!

Thanks for visiting, Jann - the photos on your blog are beautiful! The pudding was really delicious, too. Such a nice surprise from the past.