While I like to think I’ve reached the age where I know everything, there are times when I can still be surprised. During a visit to the “Camellia Weekend” at Planting Fields Arboretum in Oyster Bay, I discover that these lush and luxurious flowers actually have a connection with the most consumed beverage in the world. 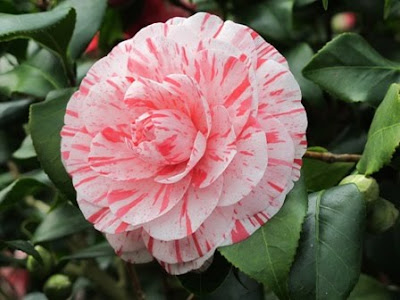 The leaves of Camellia sinesis have been used to produce Chinese tea since 2700 B.C. According to the literature distributed at Planting Fields, the Chinese Emperor Shen Nung discovered the drink by accident as leaves from a camellia tree accidentally fell into a pot of boiling water.
Who knew these exquisite, hot house flowers had such a history? 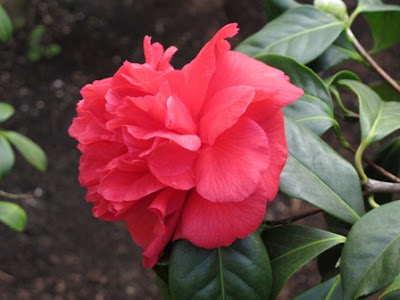 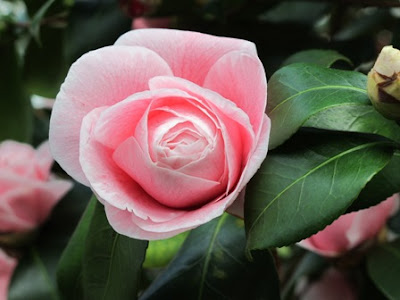 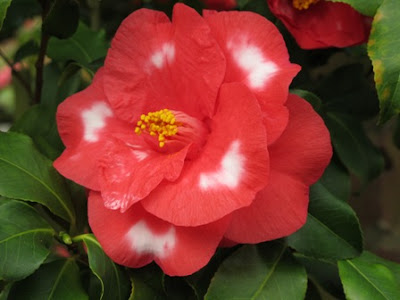 In honor of this discovery, I thought I’d share some of my favorite tea paraphernalia, including my Shakespeare tea pot, purchased at Stratford-upon-Avon and carried with care across the Atlantic: 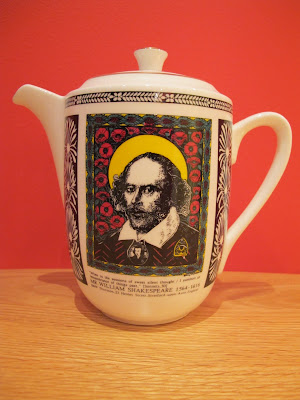 A mustard-yellow teapot from Davison Newman & Co. LTD, made to commemorate the Boston Tea Party, and including the coat of arms of the firm that shipped the cargo tossed overboard in the original Tea Party of 1773: 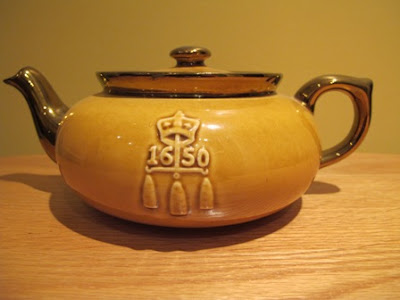 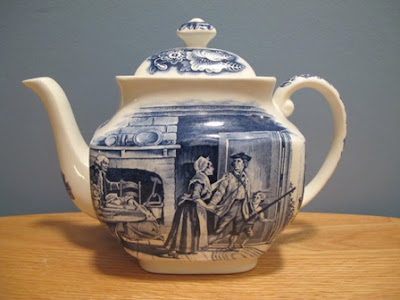 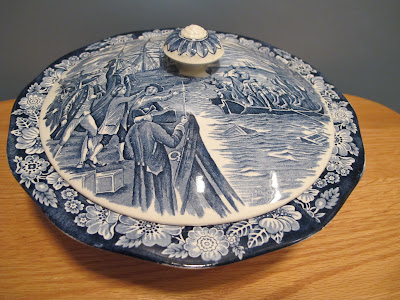 So, take time to enjoy another cup of tea this morning. It’s part of a beautiful tradition. 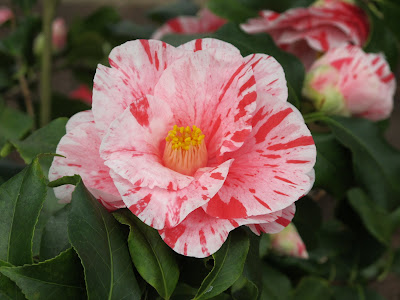 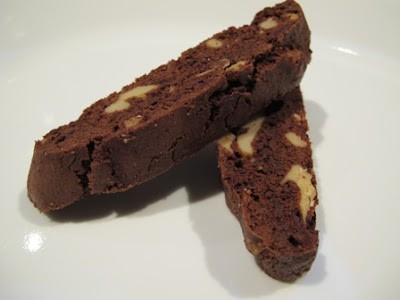 You might call this recipe for Double Dark Chocolate and Ginger Biscotti a sweet finish to a meal, or you might just call it a “super food.”

I’ve been learning more about some of the healthiest foods on the planet in the new book “Power Foods” from the editors of Whole Living Magazine. When I was growing up, Popeye got extraordinary strength and saved the day by consuming a can of spinach. Well, new research says dessert can make you a Superman. I couldn’t be happier.

Don’t mistake these biscotti for an unassuming batch of cookies. There are some extraordinary powers stirred into this simple recipe. The bittersweet chocolate is smooth and sublime, balanced with the taste of peppery candied ginger and velvety walnuts. 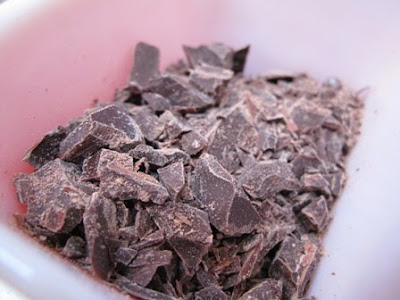 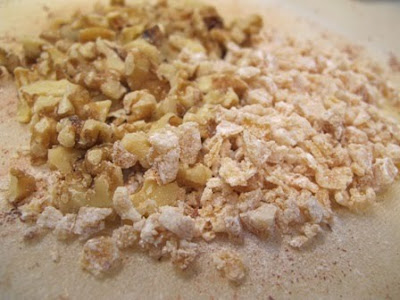 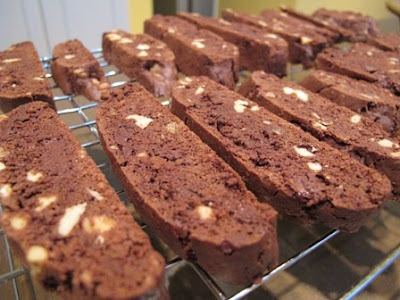 Good to know a guilty pleasure is good for you. I feel smarter already.
©2011 T.W. Barritt all Rights Reserved
Posted by T.W. Barritt at Culinary Types at 12:15 AM 19 comments:

Rustic Whole Wheat Boule – There’s an App for That 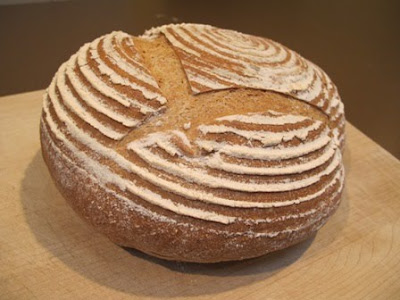 No sooner have I commenced my meditation on the spirituality of bread baking, when technology invades my reverie and my kitchen.

It starts one night when I’m traveling for business, stuck in a generic hotel and entertaining myself on the iPad. The options for amusement are limited when you travel for work. It’s usually the iPad, or several hours of MSNBC – unless 30 Rock is on. Browsing the App Store, I discover Michael Ruhlman’s new Bread Baking Basics App. Unless you’ve been living in a cave, you probably know that Ruhlman is the “Ratio” prophet. He says that in order to be a good cook, you don’t need recipes if you understand fundamental ratios of ingredients and techniques.

I’m a little skeptical. Intuitively, Ruhlman’s “Ratio” concept makes sense, but I’ve heard him rail against “the recipe” at several conferences, and I’m usually left scratching my head. Whether it’s a formula or text, when you write it down it’s a recipe isn’t it? Also, I’ve already got a small library of books on bread. But, for a price of less than two bucks, the risk in purchasing the app seems small. Think of it this way – the cost of the app is cheaper than one commercially-produced loaf of bread. I touch the screen and I own the app.

Bread baking – because of its simplicity - is perhaps the best of the culinary arts to apply Ruhlman’s “Ratio” concept. 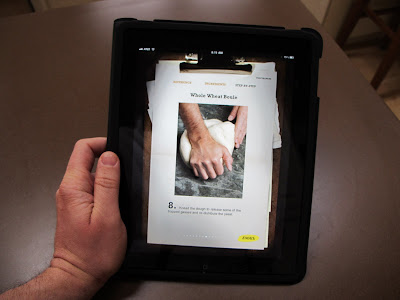 The app offers a set of menus for bread ingredients, measurements and baking options that can be customized, mixed and matched. It all seems a little too easy, a little too paint-by-numbers. I fully expect the recipe-ratio-formula to flop.
I select “whole wheat” and – seduced by a luscious photo – click on “boule" from the rotating columns of options. The ingredients are presented as ratios – 7 parts bread flour, 3 parts whole wheat flour, 6 parts water – but for the mathematically-challenged among us, the app also offers quantities in English units by weight. Desperately clinging to tradition, I select the “Knead By Hand” preference, which depicts a strong, capable hand caressing a globe of dough.
The mixture comes together beautifully and the rhythm of kneading takes its effect. Within minutes, the dough is shiny and elastic. The first rise goes off without a hitch, and for the second rise I place the dough in a banneton which I’ve had for several years but never used. Start to finish, it all adds up to exactly 5 ingredients and 15 very simple steps. 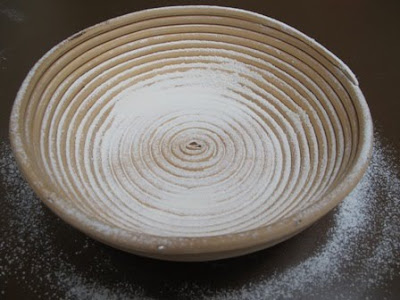 The app doesn’t have quite the romance of the Joy of Cooking, or the tactile experience of holding a book, even if you’ve got a touch screen at your fingertips. But, what Ruhlman has done is sifted out all the extraneous words, and boiled bread baking down to the ingredients and steps that matter most. By doing so he’s actually added clarity to the process. 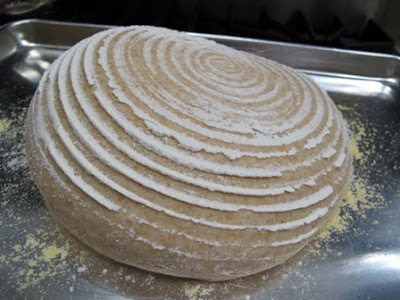 As they say – the proof is in the pudding, or perhaps the legitimacy is in the finished loaf. By early afternoon, I’ve pulled from the oven a round, honey-colored, peasant loaf with a soft, tender crumb and a crackling-good crust. It’s probably the best bread I’ve made in recent months, including some far more complicated recipes found in cookbooks with serious pedigree. 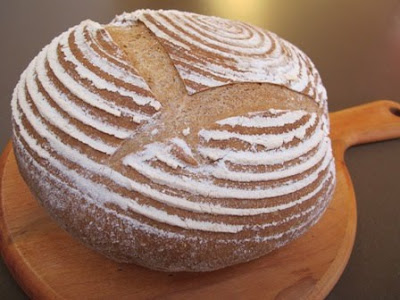 A bread recipe (make that, ratio) – powered by the iPad – resulted in one of the most delicious, old-fashioned, rustic loaves I’ve managed to produce. Has the art of bread baking entered a post modern era that blends tradition with technology? Certainly, we’ve come to appreciate that there are better options than industrial-produced bread, but not even Apple has been able to conjure up the magic of a warm, crusty loaf. That still requires the skill, care and passion of the baker. 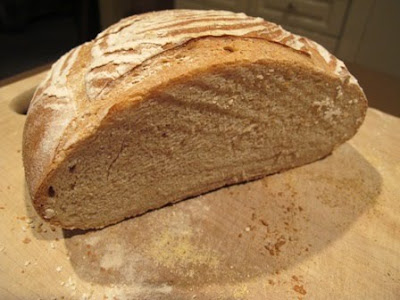 Lately, I’ve been cultivating a Sunday morning ritual. Wake up, only slightly later than on a weekday. Make coffee. Sit by fireplace and watch pinkish clouds on the horizon. Turn on an hour of choral music on WQXR radio. Listen to heavenly music. Bake bread.

There’s something right about a Sunday morning bread baking discipline. There are so many aspects of bread that are consistent with the Sabbath.

The fundamental ingredients of bread are austere – flour, yeast, salt and water. This particular morning, I’ve chosen a recipe for Cinnamon Raisin Bread. It’s not exactly Spartan fare, but the Lenten season is still weeks away. 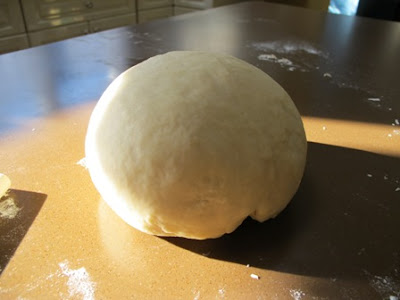 Baking bread is tactile. I’ve eschewed the electric mixer and only knead by hand. The work is rhythmic and relaxing. If you labor in an office and often fail to see the immediate impact of your work, kneading bread is a tonic. Within minutes, the shaggy dough becomes smooth, glossy and elastic. You can feel the transformation.
Baking bread is miraculous. That first peek at the risen loaf is truly inspirational. How does this happen? How does this mass of dough expand and rise so gloriously? 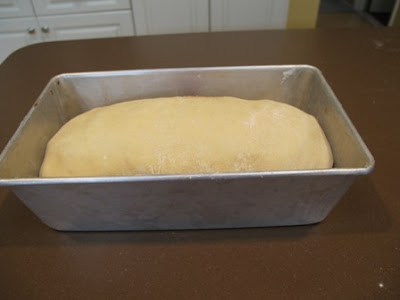 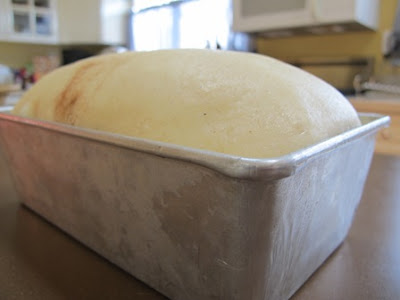 Bread is sensual. The aroma of cinnamon, butter, raisins and yeast baking fills the house and lifts the spirit.
Bread is satisfying and fulfilling. The warmth of the crisp, golden crust bolsters the soul. 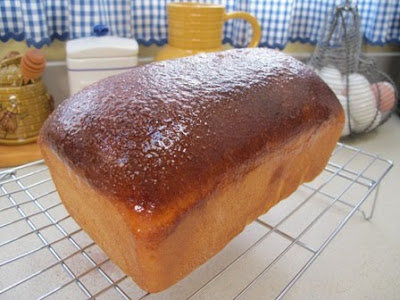 Bread is forgiving. Even if the gap between the cinnamon swirls is uneven, the homemade taste transcends aesthetics. 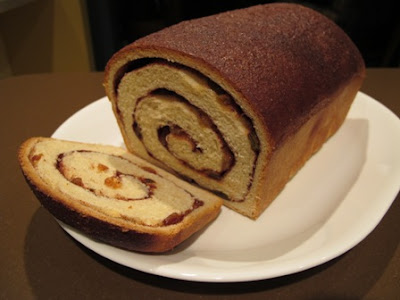 Mostly, the gift of daily bread is a blessing of nourishment for the week ahead. 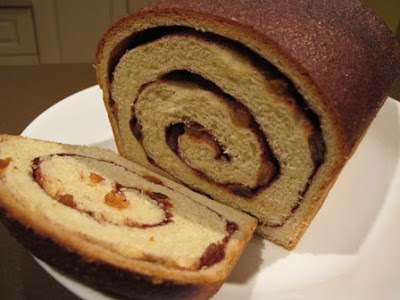