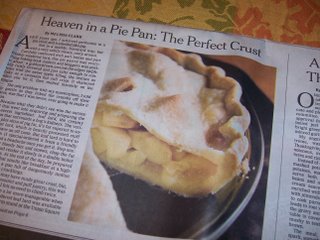 Devouring the New York Times – Wednesday, November 15, 2006: I was already hungry for this week’s “Dining In” section when I arrived at the newsstand at daybreak. The annual “Thanksgiving Edition” comes but once a year. I’d heard the radio promotions on WQXR announcing Melissa Clark’s feature on “the perfect pie crust.” It was going to be a tasty commute.

I was so wrong!

Certainly, Clark’s quest to prepare the flakiest Thanksgiving pie crust in Heaven or on Earth is admirable, and as a long time student of the pastry arts, I do believe the debate over lard versus butter as the critical ingredient has merit. Clark’s language and imagery are striking. There is also some sinfully good, mouth-watering photography and enticing recipes for pie filling like Pear-Pomegranate Pie, Honey Apple Pie with Thyme, and Nutmeg-Maple Cream Pie.

But, before you ever get to Clark’s solution of a combination of 70 percent butter and 30 percent animal fat for the flakiest pie crust in history, you are likely to go on a sudden diet.

Clark violates one of the most important tenants of food writing. The prose should taste good. Don’t make the reader lose his appetite!

It’s Thanksgiving, Melissa! It’s supposed to be about abundance, family, flavor and good taste! Do we really need the horrific descriptions of rendering lard, the endless barnyard analogies and the graphic references to a pig’s anatomy? After Clark’s lead in, I’m ready to take a pass on dessert.

Pastry is the ultimate sweet treat – the decadent escape. Some things are better left unstated. I’ll stick to Harold McGee for the science of food. But, if I want to dream of the perfect pie crust, I’m heading straight for Martha Stewart. At least she understands what visions of sugarplums are all about.

that's too funny! I am on the quest for flaky pie crust too but I do not want to envision a pig's anatomy either. I just called my mom yesterday who gave me an guesstimate of her flaky pie crust. I might try it this weekend.