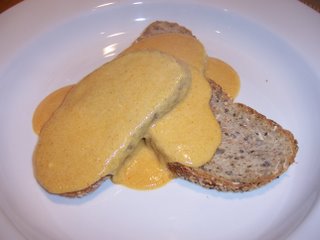 A Rare Bit of Welsh Cookery:

It’s time for Sunday Supper at the end of a long holiday weekend. My inclination is to avoid heavy casseroles or roasts, and I land on page 112 of the “Joy of Cooking” where my eyes scan a familiar title – “Welsh Rarebit.”

“Is it Rarebit, or Rabbit?” I ask aloud.

It is perhaps one of the great culinary riddles of all time. And, Mrs. Rombaurer does little to illuminate the question. She simple puts her foot down, squarely on the kitchen floor, and tells us in the recipe notes, “It is called rarebit. Rabbit is something else.”

But I won’t be deterred. Maybe it is simply the difference between the vegetarian and meat version of the same dish? Before I eat, I must know.

There is quite a bit to learn about this hopping good dish which is basically melted cheese over toast. Alan Davidson's “The Oxford Companion to Food” says the term “rabbit” was found in print as early as 1725, with the term “welsh rarebit” appearing 60 years after. Davidson also notes that 18th century cookbook author Hannah Glass offered four different recipes in her 1747 book, The Art of Cookery Made Plain and Easy, including Scotch-Rabbit, Welsh-Rabbit, and two for English-Rabbit which use ingredients like mustard and red wine. I also find some speculation that the name links back to some derogatory remarks about the Welsh people, which doesn’t seem right when you’re talking about good food.

While the accuracy of Wikipedia can at times be questionable, there’s a ripping good story about people getting nightmares from eating too much Welsh Rarebit and the logical connections are made to other relatives in the bread and cheese category including Croque Madame, Croque Monsieur and the good old American grilled cheese sandwich. Cook UK says that “Caws Pobi” is the name of the recipe in the Welsh language, which means “lightly cooked” or rare “small portion” or bit.

I find various debates over the types of cheese to use and aged cheddar seems to emerge as the clear favorite. Shredded cheddar cheese in plastic bags is viewed with considerable scorn, particularly where Welsh Rarebit is concerned.

Food historian Alice Ross provides some alternative views writing in the May 2000 edition of Journal of Antiques & Collectibles, and says that cheese and bread were staples in the English diet. Ross suggests that the dish migrated to American and took on many names and variations, but was eventually renamed “rarebit” in the late 1800s when the “chaffing dish” era arrived and a more upscale name was needed.

I know one thing. After several days of feasting I want something fast and this recipe will be ready to eat, quick like a bunny. I cut several slices of whole grain bread and toast it in the oven. I set up a double boiler and heat melted butter and McSorley’s Ale together. A deep, nutty aroma rises from the pot. I melt handfuls of aged cheddar in the broth and then quickly add a beaten egg, Worcestershire sauce, dried mustard, curry powder, paprika and red pepper. It all melts into a lovely golden orange concoction that pours over the toast like an afternoon sunset.

The aficionados are in agreement on one point – you must eat Welsh Rarebit hot. So I do. There are rich, savory flavors of ripened cheese, yeast, toasted whole grain and tangy ale. It is like fondue, but more rustic and elemental.

The Welsh Rarebit is gone faster than a magician might pull a rabbit out of a hat. And I make sure the bowl is licked clean.

Now, about those rumors of nightmares …