In Search of Johnny Marzetti 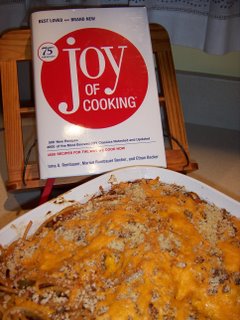 It’s a culinary mystery worthy of Sue Grafton’s, Kinsey Milhone. Who was Johnny Marzetti?
There was absolutely no evidence that he’d been a great chef or even attended culinary school, yet Johnny has the distinction of the lead position in the old/new “Joy of Cooking’s” Brunch, Lunch, and Supper Dishes chapter – Johnny Marzetti Spaghetti Pie. Hardly gourmet fare, but certainly worthy of a Sunday Supper.

But, who was Johnny Marzetti?

I didn’t have much to go on – a name, a recipe and a town in the midwest. The author’s note in “Joy” says this pasta casserole was made famous at Marzetti’s restaurant in Columbus, Ohio.

I put my Internet browser on overdrive and managed to track down a few leads. The trail takes me to a clipping in the Pittsburgh Post-Gazette which confirms that the casserole was create in the 1920’s by the owner of Marzetti’s and named for his brother Johnny.

There are other connections. Marzetti’s, located in downtown Columbus, was a hang-out for writer James Thurber and his newspaper cronies. It’s not clear when it was demolished, but by 1981, a reference in the New York Times indicates that Marzetti’s had given way to a fast-food store. I even surface a sepia postcard of Marzetti’s dining room, available for $5.00 on EBay. It looked like a respectable establishment with crisp white table cloths and comfortable chairs.

I push further. The name evokes fond memories from hungry baby boomers, mostly in middle-America, where folks recall eating “Marzetti” at lunch in the school cafeteria. Others deem it “quasi-Italian” but nobody really seems to mind. There are multiple versions of the recipe, including one made with turkey which was clearly designed to use up Thanksgiving leftovers. The Bob Evans restaurant appears to have offered Johnny Marzetti on the menu in the not-to-distant past, and I uncovered a gourmet shop that promotes their version of Marzetti as perfect for a tailgate picnic. There’s even a passing reference in “The Oxford Encyclopedia of Food and Drink in America.” Beyond that, the man remains a bit of a question mark.

Now, it’s time to taste for myself – what is the culinary legacy of one Mr. Johnny Marzetti? I turn to page 95 of “Joy of Cooking” to begin the voyage. For added authenticity, I pull out my suburban Sunbeam Electric Frying Pan, circa 1979. It was standard issue for those of us who grew up in the “Casserole Corridor.”

The ingredients are simple. Ground beef, green pepper, spaghetti, cheddar cheese, and diced tomatoes. I toss in the “chef’s choice” suggestions offered by the original “Joy-rider" Irma S. Rombauer – sliced mushrooms and olives – but I throw in a few culinary twists of my own to add dimension – thick, tubular Perciatelli instead of spaghetti for added bite, Italian-style Panko breadcrumbs for a heartier crunch and black Kalamata olives for a briny snap.

As the ingredients hit the frying pan, I am transported back to the kitchen of my youth – the astringent freshness of the green pepper, the sharpness of the raw onion and the sizzle of the beef tickles my nose. It reminds me of the many spaghetti and meat dishes we used to dine on growing up in the 60s – but ours were usually clipped from Family Circle, and had names like Noodle Lasagna, Spaghetti Bravisimo or Spaghetti Amore. Great “handles,” no doubt, but lacking the obvious cachet of being named after the sibling of a colorful restaurateur from Ohio. While the truth about Johnny and his casserole-crazed brother may be lost to the annals of time, Johnny is just one of a long line of auspicious “celebrities” immortalized in the kitchen. Even the ubiquitous béchamel sauce was named for Louis de Bechamel, the Marquis de Nointel (1630-1703).

The meat sauce simmers, and I combine the cooked pasta with the cheddar cheese and bake for 30 minutes before removing from the oven. My first impression is that it’s a heck of a lot of food. No wonder the Ohio Public School System dubbed it the cafeteria dish of choice. Impression Number Two – it’s a lot of carbs. I’m going to have to do extra time on the stationary bicycle tomorrow morning. Impression Number Three – I should have invited a dozen people over to join me for dinner.

I pour a glass of Chianti because I think Johnny would have wanted it that way and take a taste. The meat sauce is rich and savory with the taste of garlic and simmered tomatoes. The cheddar cheese and bread crumbs give the pasta a crispy and nutty crust. It’s certainly not haute cuisine, but it’s pretty darn tasty. So much so, that I have three helpings.

Who was Johnny Marzetti? We may never know his complete back story, but I do know this. He liked food that sticks to your ribs and probably enjoyed cooking for a crowd. And, if Johnny’s up there in heaven enjoying a little grappa right now, he knows I ate well tonight.

You may be interested to learn that Johnny Mazetti was adopted as a favorite cultural dish in the Panama Canal Zone; so much so that many Zonians believe it originated there. We tend to make it with either flat egg noodles and Arturo Sauce (older version), or shell macaroni and leftover spaghetti sauce.

Anyway, it's endemic to the Zone, rather like Spam is to Hawaii. I intend to update the Wikipedia entry on Johnny Marzetti to reflect this in the near future.

(By the way: note the difference in spellings. We tend to spell it without an 'r', although I have seen the other form on menus in the Zone.)

Just thinking about my upcoming lunch of leftover "mazetti" and decided to look it up on the web. My recipe came from friends in Illinois, and features corn sprinked throughout. One of the favorite meals of everyone I know who has had it. (Is it 12:00 yet?)

I grew up in west-central Ohio (Springfield, to be exact) during the 60's and 70's, and my mom served "Johnny Marzetti" made with green pepper (she called them mangoes??? I didn't know a mango was a fruit 'til I was an adult), onion, ground beef, tomato sauce and macaroni noodles!!! Aaaahhh, sweet memories... I think I'll serve it to my kids tonight! :) I've always wondered where the name came from (my Michigander husband had never heard of JM)

This was my favorite school cafeteria dish and I cannot think of many kids who didn't finish theirs when it was served. I grew up in Rittman, Ohio. As I have grown older I actually have craved this dish and oh the memories come flooding back...

I'm a 62 year old Columbus, OH native and grew up believing that this was one of the basic food groups.

During the Depression, my Mother owned a dry cleaning shop around the corner from the Marzetti Restaurant. Mother and Mrs. Marzetti were friends and since money was scarce developed an arrangement to trade dry cleaning and laundry for food.

I remember the recipe basics, but the exact details, like most depression era recipes, allowed for wide variation.

First brown the hamburger and vegetables in a skillet while cooking the macaroni.

Next, drain the macaroni and add the hamburger mixture, stwewed tomatos and tomato sauce. Season with salt and pepper. (My Mother also added one tablespoon of Mexene brand chili powder and often mentioned that Mrs. Marzetti didn't approve of her addition.) Stir and cook until the liquids are well incorporated into a non-soupy mix and serve.

Mother always served this with shredded cheddar and parmesean cheese on the table so that we could add to taste.

As a kid I remember that the side dishes never varied. Iceberg lettuce, cottage cheese and apple sauce were almost always served.

As an adult, I have traveled all over the country for work. On the east coast, in truck stops, this is the standard goulash. The north country folks call this a hamburger hot dish. Out west this is called a beef and pasta casserole.

My Illinois-bred mom cooked this once a week thru the '60's. My Minnesotan son not only confirms that in his neck of the woods this goulash or Johnny Marzetti is called "hot dish"...but tells me that at the MN state fair you can actually get hot dish on a stick!!

Dad regularly made Johnny Marzetti when I was growing up in west Columbus. He also said there was something called Jeannie Marzetti, but I don't remember the difference and can't find anyone who does.

I am so glad to read that others 1) know and enjoyed Johnny Marzetti and 2) had mothers who called green peppers mangoes! I am from Bucyrus, Ohio, but I had a big shock when I moved to Puerto Rico after graduating from Ohio University and had a mango tree in my yard. Shock - those weren't green peppers! How in the world did they become known as mangoes???

Grew up in Indiana not far from Fort Wayne. Johnny Marzetti was one of the most favorite dishes served in the cafeteria of our little Catholic school. What I wouldn't give for the recipe file that Mrs. Rethlake kept!
Kathy.

Grew up with it as a child in the Panama Canal Zone in the early to mid 50s. Still treasure my mother's recipe. And I do make it with turkey too. Any time of year, depending on current interest of those expected to be at the dinner table. A classic!