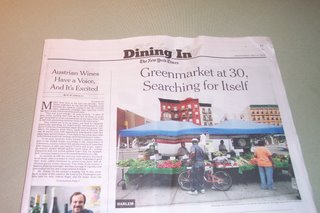 Devouring the New York Times - July 19, 2006: Today's "Dining In" Section has little to do with dining in at all, and more to do with "shopping outside." "Greenmarket at 30, Searching for Itself" by Kim Severson is the solid type of urban reporting that is far better suited to the Metropolitan section of the "paper of record." Severson examines whether the New York City Greenmarket system at 30 is facing a bit of an identity crisis, and whether ten new markets that opened this summer in the outer boroughs can survive. It's a particularly harsh question, when you consider that the official summer season is technically only four weeks old. Much is made of the importance of providing fresh, locally grown produce to neighborhoods in Harlem and the Bronx, which one city official actually describes as "food deserts." At the same time, there is much hand-wringing over whether lower income families will actually purchase high-priced produce such as heirloom tomatoes.

The problem with the story is that very few solutions are suggested. Yes, making fresh fruits and vegetables available to more people in the city is important, but most of the experts in the story seem to be scratching their heads about how to get people to buy. There's a brief reference to a novel food stamp program that is being tested at some locations, but otherwise, the reporter provides very little insight into what might be done to make these fledgling greenmarkets succeed. Clearly, creative approaches to nutrition education and food preparation training would help attract shoppers, but these themes are not addressed. And why are vendors like Harvest Time and Renaissance Markets succeeding in smaller neighborhoods? It's not made clear.

"Greenmarket at 30, Searching for Itself" raises some important issues but is searching for a theme. It's not a health story, and it's not a food story. And, as far as food section cover stories go ... Rating: Unappetizing

Posted by T.W. Barritt at Culinary Types at 8:52 PM