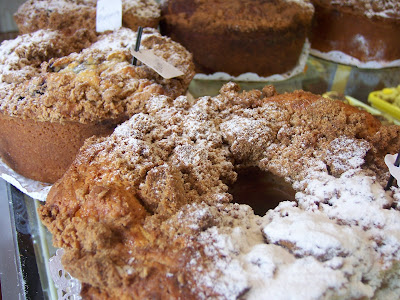 When you bite into the heavenly-scented babka or buttery apple strudel available at Junda’s Pastry Crust and Crumbs, it is more than a sweet indulgence. You become an honored guest at master baker Christopher Junda’s extended family table. Ancestry, local history, antiques and heirloom recipes are all essential ingredients baked into the classic breads, cakes and pastries found within the rustic display cases at the Jamesport, Long Island community bakery. 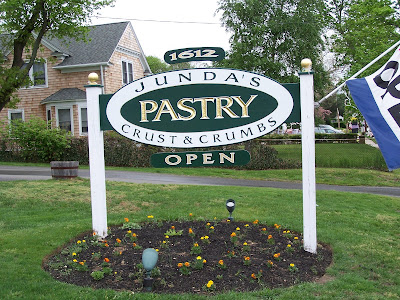 Junda’s is set on a small embankment on the North side of Route 25, commonly referred to as “the Main Road.” It is a solid, two-story, white-shingled structure with green trim. Helen Junda greets me warmly inside the shop. She has shoulder-length dark hair and is friendly and conversational. Married to Chris, she is the business manager for the bakery and describes to me the couple’s journey that led to opening a bakery in this tiny hamlet on the rural North Fork of Long Island.

As I walk with Helen, it’s a bit like having someone take you on a tour of their home for the first time. Her pride is evident, and while Junda’s is a business, it is clear that the concept of “home” is intimately connected to the baked goods. She describes how Chris – who received his culinary training at Newbury College in Massachusetts – was between jobs as an executive pastry chef and started selling homemade pies from the porch of his parent’s home in Jamesport.

“He sold out in an hour,” Helen explains.

The pies were so popular that Jamesport residents started buzzing about the need for a bakery on the North Fork. Soon the couple set their sights on the most historic structure in town. The building was built in the 1700s and is believed to be the oldest home in Jamesport. Helen leads me to the attic, where centuries-old hand-hewn beams and the original brick chimney are visible. 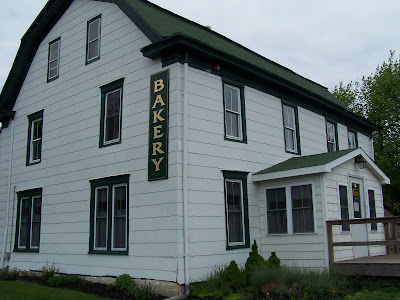 The original owner may have founded Jamesport, and slaves are believed to have once worked the property. It was an antique store when the Jundas approached the owner about purchasing the house and land. Once they acquired the building, the Junda’s would spend three years on renovations. A large refrigeration unit was added, along with professional ovens and mixers. The formal parlor of the original building became the retail space. “Chris wanted to create an old fashioned bakery that was like a home,” says Helen.

The hectic demands of the modern world dissolve away and the tantalizing aromas and homespun, country feel of the parlor room cabinetry whisk you back to a bygone era. The floor beams are original and an antique pie rack from a beloved aunt is stocked with scrumptious wares.

Helen describes how Chris loved antiques and had a passion for art. Pastry is indeed his artistic medium. The assortment of baked goods is staggering – European-style artisanal breads, babka, chocolate linzer heart cookies, pies, pear frangipane tarts, German pfferneuse, lemon coconut cake, individual pies, tarts and cakes, individual babka, black and white cookies, and jelly- and custard-filled doughnuts. While the hackneyed “kid in the candy store” phrase comes immediately to mind, it doesn’t come close to describing the confectionary fantasy that greets you at Junda’s. A steady stream of customers file into the store. One of them tells me that the line of patrons is typically, “out the door.” Another gazes dreamily at the display cases and asks for “one of everything.”

Like a favorite relative, Helen moves through the store, assembling a bag of samples for me to take when I leave. “Chris uses all butter,” she tells me. “Most bakeries use a combination of butter and shortening.” In the kitchen she slices a piece of Junda’s signature apple strudel, a recipe inherited from a retired German baker named Alfred who worked for a time at the store. 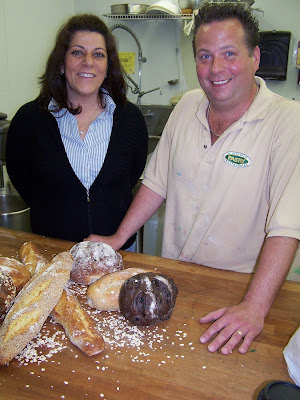 We encounter Chris in the kitchen. He has just concluded a meeting with a couple who are planning their wedding. Junda’s supplies exquisite tiered cakes to the wedding receptions that take place in the vineyards of the North Fork. One wall of the bakery is covered with notes of thanks from couples who began their lives together with a slice of wedding cake from Junda’s.

Chris is a stocky man, and wears a tan golf shirt that is adorned with multicolored splatters of frosting. We gather around a work bench to hear his story. He reminisces about Sunday trips to the local bakery as a child, summers on the East End of Long Island, the pies his family purchased at Briermere Farms in Riverhead and the relatives and trained bakers who have influenced his career. Chris maintains that he always knew where he’d end up. Today, he is both an artisan and a curator.

“We’re an Eastern European Bakery,” he explains, pointing out that he is of Polish descent and Helen is from an Italian family. Recipes are not the kind that are typically written down, but those that are passed down from one generation to another. Chris learned to bake “by texture and feel” from relatives and professional bakers, measuring ingredients by the handful. “It’s all hand done. It’s all done the old way.”

His father supported his efforts and helped in the renovation of the bakery. Chris even had connections to the original building, and would visit the owner of the antique store that preceded the bakery. “I never bought an antique from him, but I bought his house,” Chris smiles.

With Chris handling the baking, and Helen handling finances, he says they “make a good team.” He still has an apron that belonged to an aunt. The “Aunt Alice Cake” – a chocolate cake with peanut butter frosting – is named after a relative who taught him the recipe. Fruits and vegetables are purchased from the local orchards and farms. His first customer still gets an honorary cake each year. Chris makes old fashioned jelly-doughnuts because his customers like them. And, the apple strudel bequeathed by Alfred the German baker flies off the shelves at Junda’s

It is a family business, deeply rooted in the community. “All these people watch over me,” Chris says. “The name is Junda’s. I’ve modeled it after my relatives because of what they instilled in me.”

Chris returns me to the parlor room, where we are met by my friend Mary Ellen, a North Fork real estate tycoon. We say our goodbyes to Chris and head on to our lunch engagement.

Later, back in Mary Ellen’s living room, we open the bag to examine the goodies packed by Helen. We taste German pfferneuse, delicate and crumbly, scented with nuts and spices. There are decadent butter cookies, fruity Linzer hearts and a cookie filled with dark, chocolate Grenache. 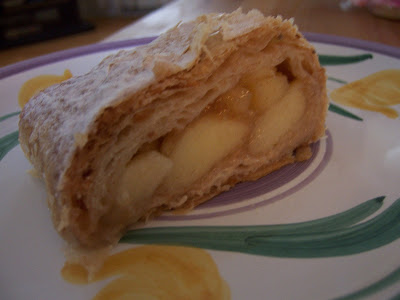 Then, we unwrap the apple strudel. Tender golden apples – with a juicy, just-picked sweetness – are tucked into translucent, shimmering layers of pastry, kissed with the delicate aroma of cinnamon and dusted with powdered sugar. It is a luminous creation, and tastes far superior to anything ever purchased at a typical bakery establishment.

With a single, succulent bite, we become a part of Chris and Helen Junda’s baking legacy.

That sounds like a wonderful place - the 18th century house it is in is just beautiful, too.

I love this post T.W. The evocative language takes me 3000 miles across the sea right into the heart of the bakery. And its so good to see that small businesses dedicated to superb quality and customer satisfaction can succeed against the retailing giants.Colette.

It has been too long since I really spent some time visiting Jamesport. Thank goodness the nice weather is settling in. I will have to stop by and tell them T.W. sent me. To think I use to be out there most weekends racing Hobie Cats out in Mattituck. I never go out there without visiting the Jamesport General Store, the wineries...Oh it is all so Delightfully quaint.

This post makes me want to jump in the car, drive down to the North Fork, and thank the Jundas for the love and attention to quality that they are obviously pouring into their business.

Oooooh what I would give to open a place like that and I love apple strudel. this is an inspiring post, T.W. I'm thinking of adding pies and tarts next to my little bites line-up.

Sounds like a wonderful place. The crumb cakes in the first picture look so good. Wish I had a bakery like that in my area.

Your description of the bakery surely makes me wish I had one in my neighborhood. The apple strudel looks delicious.

Oh, I love everything about this post, TW--the photos, the story, the feeling of nostalgia I get. You always have a way of pulling on my East Coast heartstrings.

This sounds like an awesome place run by true artisans!

Hi, I have enjoyed browsing your site and reading your archives!
Thanks for sharing!

Looks so beautiful and quaint, thanks for sharing. I love heirloom recipes...just can't make anything quite like them!

Oh, I love getting the story behind the bakers. And their baked goods look like the perfect fit for their location--a nice combination of old fashioned and rustic, but (as it looks and sounds) very precisely and well-made. The crumb quality on the top photo makes me want to weep. Seattle doesn't do crumb cakes nearly as well as the tri state area! I hope I'll get to visit this one on a visit back east!!

Hi Lidian - it is just like entering grandma's house.

Thanks so much, Colette - I found the quality so inspiring, and delicious!

Hi Louise - you must go visit! You will love it!

Lydia - let me know when you make the trip - I'm coming with you!

Veron - I know that you are going to have your own shop one of these days!

Rochelle - I want to head out for a visit again, but I think I'm going to have to pace myself!

Kathy - I'm not sure I've ever tasted anything quite as good as their strudel.

Thank you, Susan! I think you're due for a trip back East!

Jenn - I only wish they were around the corner!

Mui Mui - thanks so much for visiting!

Jackie - I agree - I wish my cakes tasted this good.

Hi Cakespy - if you come back for a visit, I will meet you for babka at Junda's!

The cheesecake, ah Junda's cheesecake! My husband and I have made pilgrimages from Huntington for the cheesecake.

Solitairemare - thanks for visiting, and thanks for giving me another reason to go back to Junda's!

It makes me want to visit this place. It's a bit away from home but someday. Everything looks so yummy.

Helene - If you visit the North Fork of Long Island, in addition to Junda's there are also wineries and farmstands and lovely seafood restaurants. It would be worth the trip someday!

Chris is truly a master !!!
I've worked with him at Garden City Hotel. I will have to come and visit as I was born in Riverhead. I had no idea his talents would take him into my old backyard !!!

What a nice place...

What a beautiful post. It's evocative & heartwarming...loved reading it!

I was just at Junda's Bakery yesterday. Stopped there as part of a visit out to the wineries with my girlfriends. Saw this article afterwards. Everything I purchased was delicious! Peach/raspberry muffuins, pecan almond cale, chrusciki fabulous! I will definitely make this a place to visit again!

Been here a couple times and you described it perfectly. A truly magical place. I asked Chris how much of the pastries do they make every day, he said: "all of them."