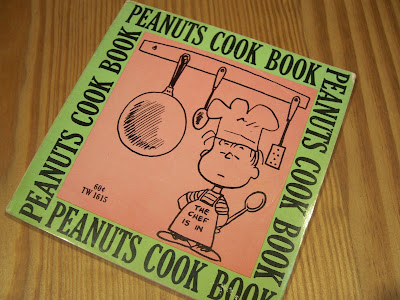 Charlie Brown as a celebrity chef? Happiness is “The Peanuts Cook Book” which Scholastic Book Services (the eventual beneficiary of Harry Potter’s U.S. fortune) published in 1970. With a price tag of sixty cents, this was a favorite cook book of my formative years. The lime-green-covered paperback with hot pink pages contained 21 recipes interspersed with Peanuts cartoon strips exploring all aspects of the pint-sized culinary world.

Well before the era of Power Rangers or Teen Age Ninja Turtles, my cartoon companions were Charlie Brown, Snoopy, Lucy, Linus and friends. If Charlie Brown liked to cook, I was into it, too. “A Charlie Brown Christmas” was the hot holiday television special, and I collected a stack of paperbacks reprinting the daily cartoon strip by Charles M. Schulz. My mom even fashioned felt hand puppets for me that bore an uncanny resemblance to Charlie Brown and Lucy. 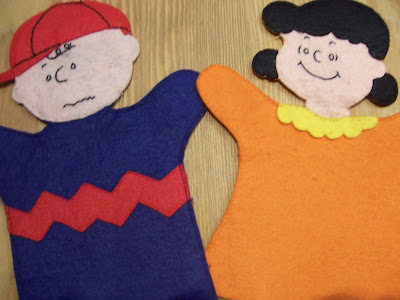 Beyond Snoopy’s craving for cookies and his penchant for quaffing down root beers as the World War I Flying Ace, or Schroeder’s insistence that one of Beethoven’s favorite dishes was Macaroni and Cheese, sustenance plays a very integral role in the security-driven philosophy of Charlie Brown, the little round-headed kid with the striped shirt. Here are just a few food-focused proverbs from the pen of Charles M. Schulz:

Security is a candy bar hidden in the freezer.

Happiness is a bread and butter sandwich folded over.

The often world-weary Peanuts gang had somewhat of a lighter touch in the kitchen. I remember preparing “Happiness is a Hot Cheese-Tomato Sandwich,” “Great Pumpkin Cookies,” “Frieda’s French Toast” and “Red Baron Root Beer” which featured frozen root beer cubes with maraschino cherries. There’s even a recipe for “Snoopy’s Steak Tartar,” with a disclaimer that it is “for DOGS only, and maybe cats.”

Perhaps the definitive Peanuts-themed recipe in the slender volume is something we all crave at one time or another. It includes kid-friendly directions, appropriate warnings about kitchen safety, and even a second quick-cook version courtesy of Linus:

Melt butter with sugar and cinnamon. Cook gently while toasting bread on ONE side only in broiler. Spread untoasted side of bread with sugar mixture and place under medium-hot broiler until sugar is crusty and bubbly. The sugar’s hot! Be careful!

Another way Linus does it is make toast in the toaster. Then he spreads it with butter immediately, and shakes a spoonful of cinnamon sugar (2 tablespoons sugar mixed with a teaspoon of cinnamon) over the buttered toast.

Happiness is still being able to page through a favorite childhood cookbook, even after 38 years!

What a sweet sweet sweet post! Your mother's adorable puppets, security cinnamon toast...you made my day :)
I am a huge "Peanuts" fan and can't wait to watch "It's the great pumpkin, Charlie Brown" every Halloween.

Lots of nostalgia in that cookbook--I've sold every copy I've ever come across. How wonderfult that your puppets are still around! I've recently started making cinnamon toast with Ciabatta rolls. Yum!

I spent half my school years hidden behind Charlie Brown & snoopie...thanks for bringing back the nostalgia!! Really cute puppets too...have a great day!!

Oh, T.W., this is so lovely! I love the book and also the puppets.

Move over, Joy of Cooking! Sounds like this was the perfect first cookbook. And your felt puppets are great kitchen companions!

There's a Peanuts cookbook? And I don't have one? The injustice of it all! ;)

I couldn't agree more with Linus. Buttery toasted bread with cinnamon and sugar is like getting a hug from your mom.

aww..TW! It's wonderful that you still have this book! :)

those puppets are adorable. There was a craze in the 90's back in the Philippines for snoopy stuff toys. In anycase, I love "Peanuts".

Cinnamon toast sure is a snack that has stood the test of time. The puppets are so cute, your Mom did a great job on them.

Nupur - we would schedule our holidays around Charlie Brown!

Kathy - I'm so glad that although Shulz has passed, Peanuts is still around. Cinnamon toast with Ciabatta rolls! I have to try!

Passionate Baker - thanks for visiting! I am so fond of those puppets!

Patricia - There's something about Peanuts, don't you think?

Susan - you can find some editions on Ebay, but you won't pay 60 cents anymore.

Veron - I think Snoopy is recognized around the world.

Rochelle - I am always amazed at what my Mom could do with a needle and thread!

I still have this book as well (the 1974 edition). I still make the Charlie Brown Cheese Puffs.

Shae - thanks for visiting! Isn't it a keeper? I'm going to make the Great Pumpking Cookie this Halloween.

My sister and I have been searching for the Charlie Brown Cheese Puffs recipe. It is one of our father's favorite snacks. Unfortunately, we have lost our copy fo the cook book and were hoping to make the cheese puffs as a part of our parents 40th wedding anniversary dinner. Is it possible for someone to share the recipe with me?

Farrah - I checked my copies (I have a first edition from 1970 and a third add third printing from 1970. They actually changed a couple of recipes between the two printings, but I don't see a recipe for Charlie Brown Cheese puffs. I wonder if it was a new recipe included in the 1974 edition? Perhaps Shae who commented above can be of help, since she has that edition?

do you have the recipe for lucy's lemon squares?
thanks ...

I remember cooking out of this book a a child and how I wish I still had the copy. Every time I make or eat a lemon bar I think that it's just not as good as Lucy's Lemon Bars. I just made a new lemon bar recipe a few days ago and had the same thought, then my mother emails me the next day asking if I have the recipe for Lucy's Lemon Bars! Too funny. I am fully braced for the lemon bars to be nothing like I remember them, but I think I need to track down a copy of this book to add to my collection. You are so wise to have kept your copy!

I used to have that same Charlie Brown cookbook and it got lost in a move. I have been searching for years. My sister and I always made the white bread receipe in there. To see the book brings back such great memories. If anyone knows how I could get a hold of one it would be so great.

That was my very first cookbook that my Mum bought me from an elementary school bookfair. It was the first of many, many to come. My favorite recipe was the lemon squares - I made them countless times as a kid, and still prefer that recipe over any other found today. I would love to come across that recipe again, perhaps a reader might have it? Thanks for sharing YOUR memories and bringing many of our own to mind again.

I am desperate to find the cheese puff or cheese ball receipe. I know some of it, but can't seem to get them to come out right. Anyone out there have it?

Lucy's Lemon Squares, for those who wanted it :)

I have been searching high and low for the cheese puff recipe as well...better late than never!
Here it is...
http://gourmand-girl.blogspot.com/

I have this cookbook from my childhood. If you open to the page for Security Cinnamon toast there is my young girl handwriting, "Mom could you make this for me. 2 slices please." Everytime I go home, my Mom puts the book in the room where I sleep. I always leave it at her house, where it belongs, until I inherit it. Great post - thank you!

OMG! I bought this book in elementary school in the 70s and my sister and I are still making the bread recipe. Best white bread there is or ever was!

OH I wish I had this ...I think this is the cookbook I'm thinking of anyway...it had THE best pumpkin bread recipe...I've longed for it....never found a really good bread recipe...

I made my first batch of cookies from this cookbook, I believe. Could you please check and see if there is a butter cookie/sugar cookie recipe. It had very few ingredients, maybe butter, sugar, flour and baking soda? I would appreciate if u could check for me. If there is such a recipe, I will be happy to purchase he book. I want to share with my grandchildren...thank you.

If my memory serves me correct;y, the first edition had a recipe for Lucy's Luscious Lemon Lollipops that had so much lemon extract in it, kids we getting lit from the alcohol content. Subsequent editions had a different recipe or no recipe altogether.

Anyone else remember this, or know what actually happened?