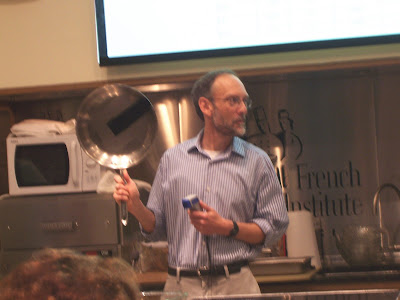 When last we left our story, Veronica, the proprietor and Chief Scientific Officer of the blogosphere’s top Test Kitchen had successfully unmasked me at the Harold McGee Lecture Series in New York City using her superior observation skills and keen deductive reasoning. Meanwhile, I was desperately struggling to comprehend the scientific principles behind what makes an egg an egg…

It is Day Two and Dr. Harold McGee is the picture of academia with the sleeves of his blue striped shirt rolled back to his elbows. Nils Noren and McGee are drinking coffee out of Styrofoam cups and each are using a kitchen thermometer as a stirrer. It is a highly scientific approach to Sunday morning caffeination.

Veronica gives me a wave from the front row. I fear that she may be sitting a little too close to the deep fryer…

It is 90 degrees outside, and they have increased the air conditioning in the International Culinary Theater, but the subject is “heat.” McGee says it is complicated, but in reality, heat is an ingredient.

The concept is so simple that those of us (like me) with science-phobia might actually miss the point. Heat – or the energy of that makes atoms move faster – transforms everything we cook, and understanding its properties and the ways to manipulate it are key to success in the kitchen.

Nils and David Arnold launch into a series of exercises to illustrate the properties of heat. McGee pulls out something called a “thermocouple thermometer” which looks like an Iphone on steroids with wire probes extending from its base like tentacles. He also has an infrared thermometer which resembles one of Captain Kirk’s phasers. Nils and David are locked in a fierce competition. It’s like Iron Chef for science geeks. They each boil a pot of water using a different conductive technology. David uses a magnetic field burner, and his pot is simmering in just less than three minutes. Dave sears a steak, and Nils flips a steak repeatedly to see which cooks faster. Nils has the more evenly cooked steak. McGee takes the temperature at three different spots in a pot of boiling water to show how heat and cold circulate. By the conclusion of the segment, I’m convinced that I’m running a fever and that the heat conductibility of my kitchen equipment is inferior. When the lunch break arrives, I am ready to head straight to Sur La Table and buy new pots and pans.

Veronica suggests a more cost-effective alternative, and we walk to the Balthazar sandwich and pastry counter on Spring Street to pick up lunch and bring it back to the classroom. She can’t resist a cherry clafouti tart for dessert, which I help her finish. Afterwards, I learn that she had already had cherry clafouti tart for dessert last night and the leftovers for breakfast!

As soon as McGee has finished his lunch sandwich, I approach him to sign my edition of “On Food and Cooking: The Science and Lore of the Kitchen.” He neatly prints the inscription inside the cover with a fountain pen. I ask him how he moved from the study of literature to kitchen science. He tells me that he was an undergraduate in science, before switching to literature. It was tough to get jobs, and as he searched for something to write about, he found that “nobody was writing about the science of everyday life.” 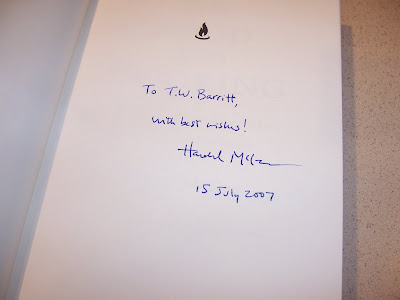 I then ask if literature and science require similar skills. He says they are really different disciplines – “One is research, and one is expression.” He admits he always loved the research phase of his studies, digging into each new topic. I can see how he earned the nick name of “The Curious Cook.” He personifies the convergence of the analytical and the creative mind.

The afternoon is devoted to a variety of topics, including the rather technical ramifications of the process called “sous vide” which is vacuum sealing. We also examine how the cell structure of potatoes and vegetables can be manipulated by holding them at various temperatures for defined periods of time. As we near the end of the day, we have sampled beef cubes, scallops, green beans and potatoes cooked at a variety of temperatures. It’s kind of an endless parade of appetizers. With that in mind, we close by sampling grapefruit juice which has been clarified by adding gelatin and freezing and then defrosting the mixture. It is sparkling, smooth and crystal clear and all of the bitterness has been eliminated. It is served with a “splash” of gin. I ask what the proportions are and one our Iron Chefs says, “We just eyeballed it.” 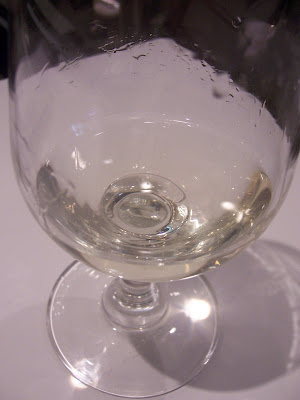 Later, Veronica and I head for the Little Owl in Greenwich Village for dinner, so I can hear the story of her life as a food blogger. That however is a story for another post!

I'm still trying to absorb everything we learned this weekend. I think I'm going to teach it to the hubbs...it'll help me learn better. Still trying to look for a source for the meat glue...I wonder if Lydia over at the perfect pantry will feature it on her blog ;).