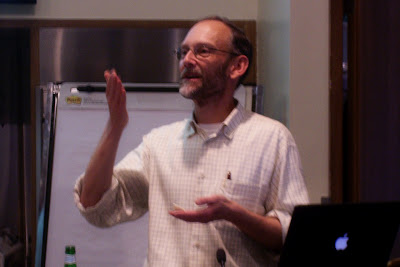 The alarm pierces my sleep at 5 a.m. and I must come face-to-face with my fear of science. I earned a whopping D+ in high school chemistry. The “plus” was awarded for showing up and staying awake. After all these years, I still shudder a bit when people talk about chemical reactions …

But when the opportunity arose to return to the French Culinary Institute in New York City for a three day lecture series and crash course in culinary science with the legendary Harold McGee, I had to do it.

Fortunately, there’s no letter grade. It’s not even Pass/Fail. I just have to show up. I suppose that’s the perfect definition of “adult education.”

I make the pilgrimage into New York and arrive at FCI to register. I offer my “everyday name” to the woman in charge and take a seat on a slightly uncomfortable folding chair. It is a medium-sized classroom with not enough chairs for the students present. It’s all looking frightfully low-tech, with none of the Mr. Wizard pizzazz I’ve anticipated.

There seem to be 15 to 20 participants consisting of current FCI students, culinary professionals and talented amateurs. There are braids, Lacoste shirts and “kitchen-inappropriate” flip-flops. One woman is cramming from McGee’s classic tome “On Food and Cooking: The Science and Lore of the Kitchen.” One guy has an unlit cigar clenched between his teeth.

Shortly before 9 a.m. we are led into the International Culinary Theater where Harold McGee and company await. McGee is a tall, slender bearded man with closely cropped hair and a furrowed brow, wearing a tattersall button-down shirt and khakis. There are raw cuts of meat on the workstation and a blender is running. He is joined by Nils Noren, Vice President of Culinary Arts and David Arnold, Director of Culinary Technology. Arnold wears a lab coat instead of an apron. The last time I saw him at FCI he appeared to be trying to blow something up inside a microwave oven. 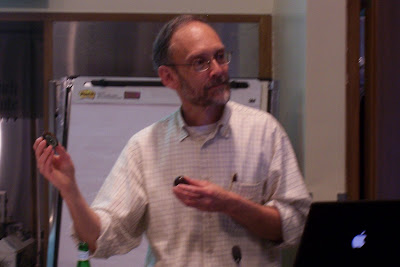 Arnold makes introductions and state unequivocally that this series is not about “food science” but “culinary technology.” I’m curious about the differences and what drives McGee. From the moment he speaks, he makes his motivation clear – this is all about “the application of science to become a better cook.”

McGee’s face beams as he describes in a mellow voice the joy of pursuing curiosity in the kitchen. He promises “controlled chaos” and “creative chaos” in the 50 experiments and demonstrations they will perform over the next three days.

He opens with an overview of the evolution of science in the kitchen and takes us through a long and checkered history of culinary explorers and kitchen discoveries. Today, it’s all perceived as somewhat avant garde but, he makes a case that the early origins of science in the kitchen can be traced back to the 1750s, where one expert named Francois Marin made the statement that modern cooking “is a form of chemistry.” Today, chefs like Ferran Adria and Heston Blumenthal are setting up their own laboratories and revisiting the principles of science in the kitchen.

McGee dissects it down to several concepts that even I – with my miserable scientific pedigree – can understand. Thinking like a scientist in the kitchen is all about being curious and seeking understanding, being skeptical and questioning common wisdom and playing with your food to discover new answers.

And play, they do with a focus on specific ingredients and their properties. The team dives into an experiment to determine if searing meat actually seals in the juices. They prepare skirt steak several ways to test the theory, and the theater smells like a Beefsteak Charlie’s. McGee maintains that you must craft kitchen experiments that focus on one factor at a time, observe carefully, and keep a log book of results. The whole focus should be to think carefully about the question you want to answer.
In the case of the seared meat, we learn a lot I didn’t realize. The “sizzle” when the meat hits the pan is actually moisture reacting with the heat and escaping from the meat. But the meat proteins are also squeezing shut. If that’s the case, the sizzle should stop, but there is continuous sizzle and moisture loss. They prepare the steak several ways – including cooking at low temperature and brining and we sample chunks of each. The “juicier” meats cooked under low temperatures actually have less flavor. So the conclusion to the experiment is that you do not sear meat to seal in the juices, but actually to make it more flavorful. My taste buds agree.

During the morning break, a woman with jet black hair, sparkling dark eyes and a sunny countenance approaches me and tells me she observed me registering my name and vital statistics with the registrar this morning.

“Um…yes,” I say, rather startled. As someone who usually manages to travel in complete anonymity I’m not sure what to expect next.

She extends her hand and smiles. “I’m Veronica,” she says.

My jaw drops. Veronica, the passionate blogosphere chef who pursues culinary solutions in her Test Kitchen, was one of my first regular readers and commentators and there she is standing right in front of me in the flesh! I’ve often wondered if I’d ever meet her. We are both pleased at the sheer culinary karma of this unexpected encounter and agree to talk at lunch.

The rest of the morning toggles between scientific discovery and culinary myth busting. McGee debunks the idea that an avocado pit can keep avocado puree green and introduces a segment called “Rediscovering the Egg” where we learn about the reaction that occurs when egg proteins are heated and coagulate. We scrutinize the different consistencies of egg foams whipped in copper and glass bowls and sample “Thousand Year” eggs preserved in acid where the egg white has turned a purplish-brown and the yolk is the color of jade. I take a bite and the former egg white is the consistency of gelatin.

As we break for lunch, I’m beginning to get the picture. The science of the kitchen is all about poking, prodding and testing the boundaries of what we know, carefully observing the results and applying the knowledge to future culinary pursuits. It is extraordinary to have Harold McGee as our congenial and professorial guide through this journey of discovery.

Veronica and I head to a local sandwich bar called the Miro Café for lunch and immerse ourselves in getting acquainted. For two people who’ve never met face-to-face, we know quite a bit about each other. We exchange cards. She hands me hers with the distinctive animated logo of a passionate kitchen scientist immersed in culinary discovery. Our conversation is snippets of questions and recollections from past postings. At times, we are finishing each other’s sentences.

“How did the Hungry Hubby survived CIA boot camp?” I ask.

“I went to Balthazar for dinner last night,” she says. “You know I’m in search of the perfect duck confit.”

I learn that Veronica studied engineering – hence the scientific and systematic approach to food – and she uses the blog as a way to organize her thoughts and results. She is also considering the purchase of a microscope and wants to do more baking. The conversation is a delight.

Back in Harold McGee’s Test Kitchen, we “explore emulsions” and their characteristics in everything from balsamic vinaigrette to mayonnaise, hollandaise sauce and ice cream. The theories are becoming clearer as I observe, taste and make notations. Emulsions are either added or already present and coat the fat droplets. Cream can be manipulated into butter and back into cream again. You can incorporate several gallons of oil into a single egg yolk. Somehow, translating science through food actually makes sense to me. The heck with the Periodic Table. 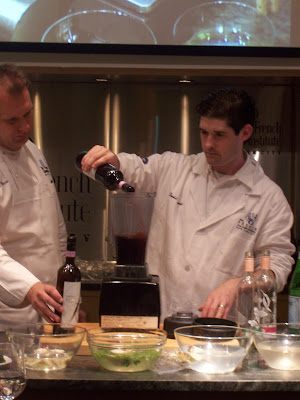 We wrap the session in an effervescent mood studying the effects of oxygen on wine. We watch David Arnold aerate red wine until it tastes soft and mellow, and sample Riesling to which he has added CO2. We taste champagnes from California and France to assess the tastes of each sparkling wine in its bubbly and flat state.

The next session will focus on specific culinary techniques and Veronica and I make plans to discover the local cuisine of Manhattan tomorrow so I can investigate more about her adventures in blogging.

Posted by T.W. Barritt at Culinary Types at 9:13 PM

so that's who this harold mcgee character is :) hehe i wondered after reading Veron's post :) So glad you two got to meet! I know I loved it when I finally met a Trini food blogger I have talked with online for some time :) Food science never interested me until fairly recently, and it really is so practical and wonderful :)

I am so jealous, T.W. So very jealous. But delighted for you of course. I hope your new found science knowledge will go to good use in the Retro Cake Challenge (when is the next one?)
Janet

Fun to read both your post and Veronica's -- two of my favorite food bloggers, together in NYC. Makes me smile to think about that! Looking forward to hearing about the next Harold McGee session.

It was a real delight to meet you, T.W.! There is still so much to talk about...i'll keep the lid on it for now. See you in class tomorrow. :)

Sarina, it was such a surprise to meet up with Veron - she is delightful! And I loved the lecture series - it has made me look at food and ingredients in a whole new way.

Janet - I will never be Einstein, for sure, but the class was very helpful. I'm back baking soon!

Lydia - we were talking about your blog at dinner!

Veron - I hope you'll be able to get through lunch tomorrow without a tart from Balthazar!