How Do You Get to the Carnegie Deli? 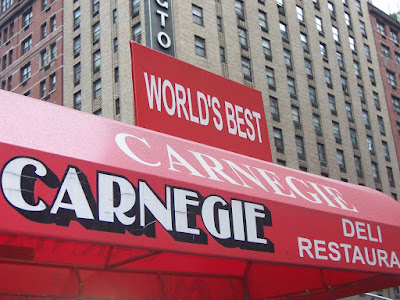 Spring is in the air in New York City, and my colleague Splint McCullough breezes into town to spend a couple of days at HQ. We decide to get a running start on the weekend with a little lunch excursion to the world famous Carnegie Deli on Seventh Avenue.

Frankly, I'm a little surprised that Splint has consented to this pursuit of Pastrami. He's always been more of a bologna guy in my mind. I've been fasting and doing extra time on the stationary bike in anticipation of this event. Splint, on the other hand, is not nearly as diligent, and considers the definition of fasting to be an extended absence from Las Vegas.

“This is the carnivore’s marathon,” says Splint as we queue up under the signature red awning with a gaggle of tourists, hoping to avoid a brief rain shower. “If you can finish one of these sandwiches, you’ve really accomplished something.” I point out that the week has been rather heavy on meat consumption. “Glad I could help,” replies Splint.

Here’s a little historic perspective. The Carnegie Deli was established in 1937. It is famous for the biggest sandwiches in the universe – roast beef, corn beef and “New York’s Best” hot pastrami. Since I am a pastrami neophyte, I needed to do some additional research. The newly published “Oxford Companion to American Food and Drink” says pastrami is a Yiddish word derived from a Romanian word for a preserved food. It’s usually a brisket that is rubbed with kosher salt and spices like brown sugar, garlic, and black and white pepper corns and then cured and smoked. Some pastrami may be soaked in brine for a number of weeks.

We quickly move to the front of the line. Inside, patrons are crowded around the meat counter, and several folks are having their photos taken alongside a giant Kelly green pickle. Splint points to a sign in the window indicating that the Carnegie Deli is featured in the book “1,000 Places to See Before you Die.”

One man in line announces to his companions, “No diet today, ladies.” The line is almost as congested and stressful as airport security. A loud alarm bell keeps going off. “Do we win something?” asks a man behind us.

In due time, we are hustled inside, and squeezed into a prime table on the main thoroughfare of the restaurant which Splint describes as “orchestra seats.” There are hundreds of celebrity photographs on the wall – from Adam Sandler to Ziegfried and Roy – bolted in place to discourage sticky fingers. There is even a portrait of Santa Claus, who presumably stops by every December 24th for a quick snack before getting on the road for the night.

We place our orders. I go traditional with New York’s Best Hot Pastrami on Rye and a diet cream soda. Splint, a veteran of the deli, orders roast beef as a change of pace. There is a bowl of giant mutant pickles on the table. “Antipasto,” smiles Splint. 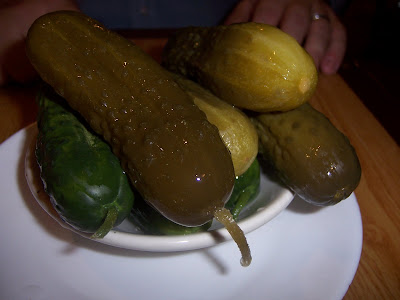 The seating is tight and the patrons are a bit on the raucous side. “We’re stacked elbows to buttocks. Oh, the humanity,” Splint intones. At one table, a crowd of wait staff produce a cheese cake and sing “Happy Birthday.” We strike up a brief conversation with a couple seated next to us from Oklahoma City who are waiting for the remains of their sandwiches to be put in doggy bags. They ask a lot of questions about the cost of living in New York which is understandable coming from people who have just invested more than 25 dollars in two sandwiches. As the woman squeezes behind my chair to exit, she mutters under her breath, “I could get through here before I ate that sandwich.”

Our sandwiches arrive and we survey the challenge before us. My pastrami sandwich, or “The Holy Grail” as Splint calls it, is pink and glistening and stands about eight inches tall. 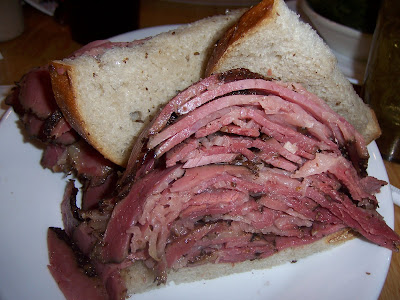 Splint’s roast beef resembles a mid-sized Manhattan office building. Within minutes, my sandwich has collapsed and I’m forced to resort to knife and fork. Splint’s technique is amazing. Not a shred of beef falls to the plate. He handles his sandwich with the precision of an impresario. He’s so neat, it’s almost a little prissy. He might as well be partaking of afternoon tea. It’s the Felix Unger School of Sandwich Consumption. 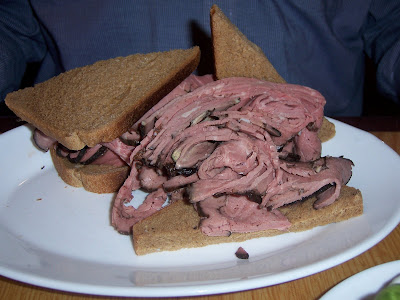 Splint is a little under whelmed with his sandwich and finds it a bit ordinary (“It’s a Norman Rockwell versus a Mona Lisa.”) but my tower of pastrami is the genuine article, smooth, briny and buttery with just a hint of flint, smoke and spice. I start to experience an intense protein buzz. “That’s the blood struggling to get to your brain,” suggests Splint.

I make a valiant attempt to try and finish the remaining debris on my plate. 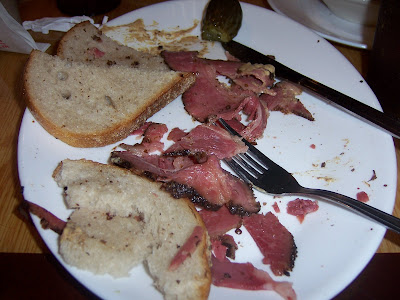 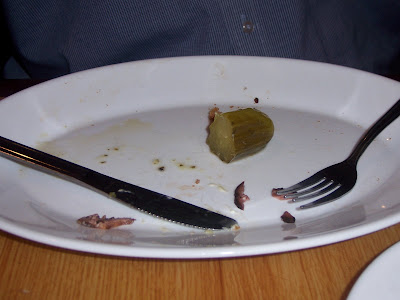 As we prepare to leave, a group of four has taken the seats next to us. “This is a double Lipitor moment,” remarks one of the women.

It turns out this is just an appetizer for Splint. Tomorrow, he’s got reservations at Peter Lugar’s Steak House. Me – I’ve only got nine-hundred and ninety-nine of those fascinating places left to see before I die.

I must protest -- it is totally unfair to post about the Carnegie's sandwiches when I am hungry!!!! I used to work three blocks from the deli when I lived in NYC years ago, and I still crave the pickles and the overstuffed corned beef sandwiches every now and then. Thanks for the fun post!

Great article! The pastrami sandwich looks delicious! We don't have sandwiches like that here!! I also am in awe of the giant pickles! And the name Splint too!

Lydia - I'm not sure I'm ready for pastrami for breakfast, but for lunch, it is indeed a religious experience!

Freya and Paul - thanks for visiting! I know they ship their famous cheesecake, but you'd have to ask about the pastrami sandwiches and pickles!

Whoa, look at that sandwich! And those mutant pickles! I really want a nibble - no, I want a bite!

Epilogue: I was duped. My "Peter Luger's" reservation turned out to be a reservation at "Wolfgang's." According to the legend, Wolfgang was head waiter at Luger's for decades and then decided to replicate the menu with his own steak house, Manhattan side. Good steak, but it just wasn't Luger's. Perhaps it's Wolfie's betrayal that taints the meat ever so slightly. Manhattan-ites, you still have to cross the bridge to Brooklyn for the best steak on the planet. Sorry to disappoint.

OMG , that mile high pastrami sandwich makes me wish it is lunch time already. That looks so good , T.W. !

It's worth the trip, Veron! I may go back to try the corned beef!