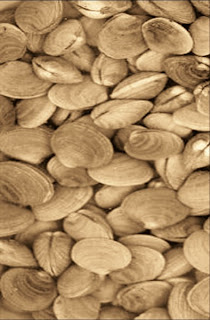 As we move towards the culmination of our American-Canadian Cooking Project, Jill’s research is all about shell fish. She writes:

According to the Encyclopedia of American Food and Drink, chowder was a staple dish of early New Englanders. The term "chowder" appears to derive from the French word for cauldron, chaudière, after the large cooking pots into which sailors from French fishing villages would throw part of their catch to make a communal stew. Chowders were popular in coastal France and England, a custom that carried on to the eastern provinces of Canada and down to New England in the 17th and 18 centuries. (As I've been wandering through the cuisine of the eastern U.S., it's been interesting to note the commonalities between some of the traditional dishes of New England and Canada's Atlantic provinces - not surprising, given their shared coastline and historical ties.) In Jasper White's book of chowder lore and recipes, 50 Chowders, he notes: "It is in Newfoundland, Nova Scotia, New Brunswick, and New England that chowder making flourishes and where chowder becomes an integral part of the diet and culture."

The oldest-known printed recipe North American chowder appeared in the Boston Evening Post in 1751. Chowder or "chouder", as 18th century cookbooks labelled the recipe, featured fresh fish, salt pork and ship's biscuits or crackers and sometimes onions -- all ingredients readily available to the sailors from whom the soup originated. Early New England chowders typically included fish such as haddock or cod. Clam chowders were known in New England, particularly in Boston, by the mid-1800s, but did not become popular until the early 1900s.

I've discovered that there are many different regional types of chowder and definite views on their merits. For instance, in 50 Chowders, Jasper White writes: "All of northern New England abhors the tomato-based chowders from Connecticut and New York...". There is also much controversy over the "right" way to make a New England-style clam chowder. While the basics of clams, salt pork and potatoes seem to be fairly constant, there are innumerable recipe variations. More on those later.

Having had too many bowls of gummy, so-called chowder that tasted more of flour than fish, I'm looking forward to making my first "chaudière" of authentic New England-style clam chowder. Apparently chowder is best prepared a few days before serving, so it will be a great make-ahead dish for the March 18 American feast.

Meanwhile, I’m after the history of Canada’s number one cocktail, which might be a distant cousin …

Posted by T.W. Barritt at Culinary Types at 5:26 AM

I always like New England Clam chowder over the other variations!

I loved that photo of the clam shells-when we were kids vacationing in Cape Cod, we would dig for clam when the tide was out. We would bring our buckets to our mom-the "chowder queen". what a great soup...