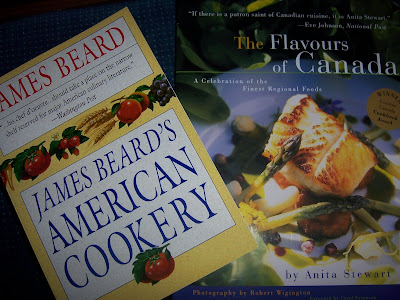 The dishes have finally been put away in New York and Ottawa, and we’ve finished off the last of the Nanaimo Bars and Sweet Potato Pie. With a chance to step back, Jill and I begin to reflect on the outcome of our American-Canadian Cooking project. Perhaps without realizing it, we concocted a recipe of distinctive ingredients – one part culinary detective work, one part cultural exchange, and one part oral history. It was a tasty cross-border collaboration So, what did we learn? Jill and I compare notes:

TW: First of all, if you're going to get involved in a major cooking project, you should clean the oven first! But beyond that, I thought it was fascinating to track down the history of several dishes. I knew nothing about the menu items you suggested, and with the exception of pea soup, had never heard of any of them before. It was sort of like a culinary treasure hunt with only a name as an initial clue. Everywhere I looked I found a new story linked to each of the food items on my Canadian list.

Jill: And if you're going to make clam chowder, you should really invest in a large stock pot to avoid a tidal wave of clam broth in the kitchen! While I had heard of the dishes you selected, I had never made any of them and knew little about their background. Along with learning about the history of the menu items, I got caught up in all sorts of interesting side-tracks, making for a combination culinary and American history lesson. I also made the (pleasant) discovery that my pre-conceptions about some of the dishes were wrong.

TW: There was tradition and history layered into every dish, and lots of local variations. While I ended up picking some of the more classic versions of each recipe, there were many distinctive versions that had grown out of specific cultures and communities.

Jill: I found it fascinating to look at some of the early recipes for the American dishes and see how they had evolved over time. It seems that recipes have changed or new versions been created as a result of the availability or popularity of certain ingredients, changing tastes, and to adapt to different cooking methods.

TW: It was surprising to discover how passionate Canadians are about certain dishes. I mean, there is actually a national dialogue about the qualities of butter tarts, and everyone drinks Bloody Caesars! In the U.S., there are certainly debates about regional foods, but I'm not sure Americans are collectively vocal about a single dish, unless it's pizza or burgers and fries.

Jill: Maybe it's because our population is so much smaller - there's room for everyone to get involved in the butter tart debate. I certainly discovered a very lively discussion about the various types of chowder, including some particularly vehement commentary on the merits of Manhattan clam chowder. By the way, while it's well-known that we all eat doughnuts, I can't confirm that all Canadians drink Caesars.

TW: Lydia at "The Perfect Pantry" blog noted, with good humor, that all of the Canadian foods were brown. Would you care to comment on that further, Jill?

Jill: Don't forget about the red and green Caesars! Still, I can't deny that I picked a decidedly neutral-toned menu. Your choices produced a much more colourful meal. But T.W., let me assure you and Lydia that not all Canadian food is brown. We grow apples, blueberries, and peaches, to name a few colourful foods, and we really do have fresh veggies.

TW: It seemed like most of the Canadian foods had roots in Europe, and actually have a certain longevity. The stories of the food become part of the fabric of the culture in each province. However, some of the American foods may have fallen out of fashion.

Jill: I found it curious that Country Captain, which seems to me to have quite "modern" ingredients and appeal, has come in and out of fashion. New England Clam chowder, on the other hand, appears to have consistently maintained its popularity. It's certainly an essential part of the region's culture.
TW: I was just as interested in what you were discovering about American foods as what I was learning about Canadian cuisine. I had never heard of the story of Oscar Tschirky and Waldorf salad, nor Cecily Brownstone's passion for Country Captain.

Jill: I agree. I think I learned as much about Canadian cuisine as I did about American dishes. Walter Chell's creation of the Caesar, the official Naimano Bar recipe, and the history of the butter tart were all new to me.

TW: There were some subtle connections between countries and cuisines that started to emerged as we shared our individual research.

Jill: With the proximity of Canada and the U.S., it's not surprising that our foods share many connections. It was interesting to discover that some of the dishes we chose may have particularly close ties, for example, chowder first being brought to eastern Canada and then down to New England, and the theory that butter tarts descended from the pecan pie brought to Canada by American slaves. I even found a recipe for tourtiere in a New England cookbook, reflecting the French Canadian influence in that region.

TW: Of course, you didn’t tell me until after the fact, that you were not a great fan of tourtiere! I was impressed with your investigative skills, the trips to the library and the detailed Internet searches. At one point, I was pressed for time, and just ordered several Canadian cookbooks on the Barnes and Noble website.
Jill: Until we started this project, I wasn't aware of the amazing historical cooking sources that exist electronically. For instance, I could have spent hours (in fact, I did) browsing through the Historic American Cookbook Project at the Michigan State University Library. I was impressed by your research as well, but also by how whole-heartedly you and your guests immersed yourselves in the Canadian experience. You may have to celebrate Canada Day this July 1st!

Well, I’m always game to add another day of feasting to the calendar. When we first started this exploration, Jill listed burgers and fries when I asked her what came to mind when she thought of American cuisine. We’ve certainly learned that there is some deep history, tradition and a bit of legend attached to the foods of Canada and America. Jill has confirmed there is more to American cuisine than burgers and fries, and I’ve come to appreciate the therapeutic value of starting out a good Canadian meal with a round of Caesars, and concluding with the esteemed butter tart!

A lovely project, and a lovely conclusion to it. Thanks to both you and Jill for letting us in on the fun.

So maybe we aren't so different after all! Everyone likes good cooking~ eh?

Great project! I like this part when you "digest" what has transpired and give each other's insight into the other's cuisine. Again, kudos to you and Jill!

Great project and very well thought out by the two of you. It was clear that a lot of energy went into this beyond 'just' finding recipes.

Ok, this is swell. Wish I had known as you were doing this-- as an American with a Canadian partner, and we live in upstate NY. Great project.

Stop by my blog if you want -- and leave advice!

The blog is cooking with ideas at http://www.cookingwithideas.typepad.com

As a Brit who, until she married her American husband, thought that Canada and America were pretty much the same, this is a fascinating post! I have since come to realise, especially since food blogging, that the two are very much different entities - particularly culinarily! Thanks for sharing!