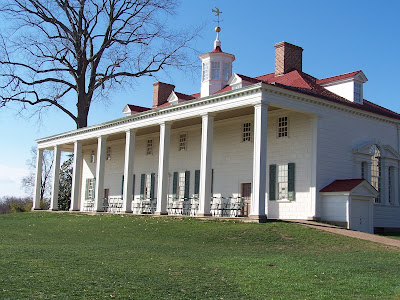 Friday, January 19 -- The sky is colored robin’s egg blue, the sun glistens at midday, and there is an icy wind glancing off the Potomac River. I stand on the bluff above the river and admire the stately and symmetrical white house with the brick red roof, cupola and broad piazza that stands before me.

Mount Vernon in Virginia was the life long home of George and Martha Washington. History was made with great frequency in this gracious home. And, the Washington’s fed a lot of people along the way, to the point where General Washington described the operation as similar to a well-functioning tavern. Mount Vernon was the home of the First President, but it was America’s home, with hundreds of visitors annually.

I’m at the start of a four-day celebratory trip – sort of an excursion of historic and culinary destinations in Virginia. I’m in search of distinctly American food and the people who prepare and eat it.

George Washington was deeply involved in the building and even the decorating of Mount Vernon, ordering crates full of plates, silverware and table accoutrements that adorned the dining room. But, it was Martha Washington who was the commander-in-chief of the culinary activities at Mount Vernon.

Martha was a voracious collector of recipes. If she’d lived today, she would have likely been a regular subscriber to Gourmet, or even kept a food blog. After Washington died, she burned their personal correspondence, but her culinary legacy remains. Food historian Karen Hess chronicled Martha’s efforts in the book Martha Washington’s Book of Cookery. Hess examined a document, long in Martha’s family, that contained hundreds of handwritten recipes for everything from fancy dishes, to everyday food. Some were passed on from her mother, which was the tradition, and others she added to the collection. During the 18th century, homemakers would keep handwritten books of “receipts,” or what we now call recipes. The idea was to capture the culinary knowledge, so that it could be passed on through the family.

The Mount Vernon estate was self-sufficient. Washington was a gentleman farmer who grew wheat, corn and potatoes, that is when he wasn’t out fighting the good fight for liberty. The plantation raised cows and pigs, and they caught fish in the Potomac River. What they didn’t eat fresh, they smoked and stored for later use. Many of the home-grown ingredients are found in Martha’s recipes, from a well-spiced Chicken Fricassee, to a dessert called Syllabub, which contains fresh cream and sherry.

In one of the galleries of the newly-opened education center, there is a cookbook and domestic manual called The Art of Cookery Made Plain and Easy by Mrs. Hannah Glasse, who was the Martha Stewart of the 18th century. Martha Washington gave this copy to a young relative. While she herself had great culinary knowledge, Martha Washington clearly appreciated expert advice, as Glasse was the thought leader of her day.

In many ways, Martha Washington was an individual who lived in extraordinary times, but still engaged in activities of hearth and home with great care. Her husband was away for long periods in battle, but she still had day-to-day concerns. She thought and cared about the type of food she served her family, the types of ingredients used and how it looked. And, she made an effort to pass her knowledge along to her children and grandchildren. In many ways, we are a bit like Martha Washington, too.

Late in the evening I arrive at the Foster Harris House, a bed and breakfast in Washington, Virginia. The night sky is aglow with a million stars, and the proprietor welcomes me with a glass of red wine from Washington State tasting of oak and tannin. The breakfasts are said to be sumptuous, so I’m looking towards Saturday morning with great anticipation.

Your trip sounds like such a neat experience! I never knew any of this about Martha Washington (sadly, I only thought of her as 'the woman married to...'). Your entry added life to her character for me, she sounds like she was an interesting person. Someone I'd definitely want to invite over for tea!

Thanks for all the info-I enjoyed it very much!