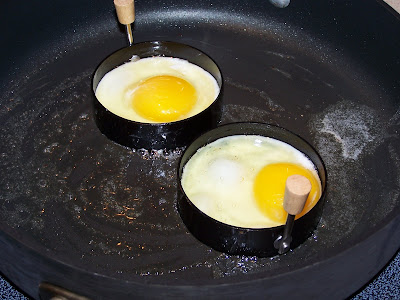 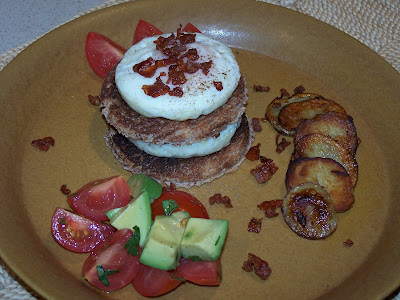 A Stack of Sunnyside Eggs and Toast for a Buttondown Chef:

When it comes to cooking, I’ve typically been a slave to the recipe. I don’t waver much from the prescribed directions. When it comes to braising, basting or blending, I’m Buttondown Oxford all the way.

Lately, I’ve had an urge to loosen up, at least in the kitchen, attempting to let the recipe serve as inspiration for a more creative culinary process. I’m trying to think more about flavor combinations and I’m keeping watch for techniques in other kitchens that I can add to my repertoire and recreate at home.

My recent visit to the Foster Harris House in Washington, Virginia was instructive. John MacPherson is an intuitive chef who can look at a set of ingredients and see something beyond the conventional picture. Each morning, I studied John’s breakfasts carefully. There were certainly eggs, and breakfast meat and potatoes, but the traditional ingredients were deconstructed and rebuilt as brilliantly colorful and whimsical creations.

Think of this as the “Rubick’s Cube Culinary Technique.” Back home, I decided to take the plunge. No recipe – just ingredients. I stand at the fry pan with a momentary feeling of uneasiness, like I don’t have enough starch in my collar.

I try to visualize the end result, and circles become a common theme – circles of eggs, circles of toast and circular potato chips. It all comes down to looking at the dish in components, preparing each part and then assembling the final project. The petite Yukon gold potatoes are boiled, peeled and sliced before browning in butter. The eggs take about five minutes in the fry pan, and the tomatoes and avocados are dressed in fresh lime juice and cilantro. The miniature “bacon” garnish is a bit of kitchen prestidigitation I learned from John – slivers of prosciutto are fried crisp and sprinkled over the plate. The result – A Stack of Sunnyside Eggs and Toast.

My breakfasts still have a long way to go before they match the excellence at the Foster Harris House, but I’m exploring and becoming more adventurous in the kitchen. I’m even thinking of leaving my shirttail un-tucked tomorrow.

Email ThisBlogThis!Share to TwitterShare to FacebookShare to Pinterest
Labels: Breakfast

Wish that was my breakfast this morning...sure beats my toast! lol

I think those perfectly round eggs are cute!

Oh - I want one of those little egg gadgets. Very cool!

I'm like you... I hardly ever deviate from a recipe. Maybe it is time to get more adventurous in the kitchen!

I have always wanted to get egg rings. Looks like they do the job, breakfast looks great!

Wow TW, what a scrumptious breakfast. I can wait to try John's breakfasts!

I read somewhere that you can do the same thing with eggs if you cut both ends off a tuna can and us it as the form. Makes sense, but I haven't tried it yet. Of course, you don't have those nifty little handles, but it would probably work.

i love this-look at these mile high eggs! What a beautiful presentation! Cheers!

Wow.. nice culinary blog you have. Would you mind if i ask you for alink exchange? Nice work.