The Inn at Little Washington 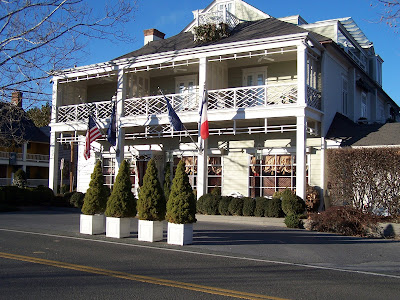 Sunday, January 21 – Tonight is my big celebration – another year on this Earth. Since it’s been a year of culinary discovery, I’ve decided to mark the evening at a place that the International Herald Tribune called one of the 10 Best Restaurants in the World.

To get a bit more emotive about it, my friend Jill in Ottawa provides this little tidbit she found on the Internet – the food is so good, it will make you cry.

That’s extraordinary praise when you consider the humble beginnings of The Inn at Little Washington. The Inn opened on January 28, 1978 in a renovated garage located in a town that most of the world had forgotten. Washington, Virginia has deep historic roots. As a young surveyor, George Washington laid out the town in July, 1749. But until the opening of the Inn, the town was an intriguing footnote in the life of a Founding Father.

Chef Patrick O’Connell and Reinhardt Lynch are the proprietors of this culinary shrine, due west of Washington DC. In his book Refined American Cuisine, Chef O’Connell says that restaurants are “living theater” and that cooking is a means of communication. I agree with the philosophy wholeheartedly, and I wonder if the food will “speak to me.”

Before we get to that, allow me a slight diversion, since half the fun of any culinary adventure is getting there. The morning starts cold with just a few flurries. At the Foster Harris House, John and Diane serve a memorable breakfast of fresh fruit and vanilla yogurt, ginger scones, Puff Pastry Topped with Avocado Salsa, Poached Egg and Chipotle Cream Sauce with Paradise Bacon and two tender shoots of asparagus placed across the top. For the finale, we are served Dad’s (that’s Diane’s dad’s) Favorite Pancake with Chocolate Chips and Maple Butter Sauce. The salsa is impossibly bright and fresh with red and yellow heirloom tomatoes and finely chopped cilantro that pops like Independence Day firecrackers.

The snow flurries appear to be no cause for concern, and I gas up the rental at a filling station on Route 211 in preparation for a short excursion. An older woman, perhaps in her late fifties, pulls into the station and parks on the other side of the pump. She smiles at me as she parks, clearly recognizing that I’m not a local.

“Filling up before the snow gets bad?” she asks.

“I’m heading over to Monticello,” I reply, as I am intent on learning more about Thomas Jefferson’s gourmet pursuits.

She shakes her head and smiles again. “You’re heading into it. Be careful,” she recommends, and explains that the snowfall can vary considerably in the Blue Ridge Mountains. She tells me that she originally lived in DC, but moved out here to start an animal sanctuary and has learned the personality quirks of the local weather.

“I can always turn back, if it gets worse,” I offer.

“Be careful,” she tells me again, and gives me a friendly wave as I depart.

By the time I reach Route 29 outside of Madison, Virginia, the snow is thick, and I’ve skidded twice. The countryside looks like something out of Currier and Ives, but I see there is now a dense layer of snow on each cow in the field. I decide to heed the friendly stranger’s advice. She is perhaps the guardian angel of my culinary pursuits. Thomas Jefferson’s culinary story will have to wait for another day. A fender bender could really ruin my dinner plans, so I turn back towards Washington.

It is slow going on country road 231, but eventually I make it back to the Foster Harris house by about 12:30, car and body intact, content to sit with a glass of wine and watch the snow fall from the window. John prepares savory curried chicken sandwiches on toasted bread, pours red wine, and he and Diane and their young son and I spend a delightful afternoon chatting about culinary pursuits, food, wine and favorite restaurants. The snow continues to fall into the evening and the flakes get larger. It’s really quite beautiful if you have no where to go and one of the best restaurants in the world is just up the street.

About 6:00 p.m., I step out on the porch, open my umbrella and set out by foot to the nearby Inn at Little Washington. I walk, down the center of Main Street, resembling Mr. Tumnus from the Narnia books, a lone figure crunching through the snow by lamplight with umbrella in hand. Just up ahead, the warm glow of the Inn beckons me closer.

Inside, I check my coat and I’m escorted to the Living Room and served a glass of Brut Champagne. I’ve entered a wild imaginary land, the décor an exotic explosion of Tales of the Arabian Nights, Kismet, and Sunset Boulevard. There is velvet, golden tassels, fringed lamps, tapestries and tables adorned with miniature elephant tusks. I settle into a neon-blue velvet throne and snack on Pineapple chips dusted with Cajun spices and Parmesan Crisps as I take it all in.

The effect is one of being swept away by a cyclone and finding oneself in the Land of Oz, although carried away by a snowstorm is probably a better analogy. I am about to meet the cast of whimsical characters who will lead me on this culinary journey. Simon escorts me into the dining room, wishes me many happy returns for the day, and I nestle into a perfect corner table among a cluster of small pillows. Ross presents me with a personalized menu that that is inscribed with “Happy Birthday” and the date at the top. I am conscious that I have been thrust into a grand theatrical adventure, not just as an observer, but a wide-eyed journeyman at the center of the action.

Miniature appetizers appear as if by magic – intense dollops of flavor to be sipped off white spoons, such as Parmesan Cream, Red Beet or Tuna Carpaccio. There are also crispy Tempura green beans in a silver cup with Thai dipping sauce and a pristine white porcelain tea cup filled with warm red bell pepper soup perfumed with the intoxicating scent of Sambuca.

I spend some time studying the menu, as the choices are extensive. There is a
Chef’s Tasting Menu, and many dishes under First Courses, Second Courses and Entrees with ingredients that are either exotic, artisinal or regional to the local Virginia countryside. I make my selections, and engage the knowledgeable and friendly wine expert, Sabato to create a series of pairings. He asks me if there is any particular wine I would prefer and I put myself completely in his hands. “We’re going to travel the world,” he tells me.

The first course is Carpaccio of Herb Crusted Baby Lamb with Tabouli and Rosemary Mustard. The paper thin circles of lamb are layered in a concentric pattern on a large platter. The lamb is milky, grassy and herbaceous and Sabato pours a clean, citrus-flavored Riesling from Australia.

A Fricassee of Main Lobster with Potato Gnocchi and Curried Walnuts arrives next. The succulent chunks of lobster flesh and melt-in-your mouth pillows of gnocchi are paired with a slightly spicy Viognier from Washington State.

I’ve had to do some personal soul searching over the main course. I’ve heard raves about the sweetbread entrée, and while I want to be adventurous, I’m just not sure. Ross solves the dilemma and offers me a tasting before my entrée. Sabato pours an Australian blend of Shiraz, Grenache and Mouvedre that smells of fragrant holiday spices. The tasting of Veal Sweetbreads Braised in Ruby Port on Pappardelle Pasta with Huckleberries and Country Ham is sublime with a sweet caramelized crust, and tender center that frolics with the savory ham and delicate pasta.

My Main Course is a bounty of flavors of farm and harvest. The Seared Four Story Farm Duck Breast on Turnip Skillet Tart with Wild Rice Pilaf, Brussels Sprouts and Chestnuts, is brilliant pink, fanned across the plate, and glistening with tiny pearls of Brussels sprouts. Sabato lines up three reds, from Spain, Italy and France to frolic with the duck. Simon the maitre de glances over, grins and says, “Sabato likes to play!”

I forgo the sweets for dessert in favor of the cheese course. Robin rolls out a honey-colored cow named Faira on wheels. She moos as she inches towards me, a tray of enticing cheeses on her back. Robin cuts me at least six slices describing each cheese, and he ends with a spoonful of molten-soft cheese from Burgundy which is like ambrosia. Having consumed the last morsel of cheese, I am presented with a wicker basket of sweets and a yellow marzipan banner with the words “Happy Birthday.”

With the celebratory feast concluded and my palate in near ecstasy, I am taken behind-the-scenes for a tour of the kitchen. I marvel at the sleek green custom built ranges and the scene of kitchen wizardry that continues this late in the evening.

Shortly after, it is time to bundle up again and step out into the snowy Virginia night. Like in all those fanciful adventure stories, I must finally leave this supernatural place and its wonders, but the culinary magic of the Inn at Little Washington will continue to enchant my memories.

My bday is next week!!

Wonder what it is about Aquarians and food?

TW,your description of your meal has left me hankering to just pack up and go there this weekend. Alas , i can't so maybe I can go on my birthday too :). The foster harris house sounds lovely, I think I'm going to stay there next.

(I think I posted a comment earlier(yesterday) but I did not save it...so if you get my first one just choose which one to publish ;))

Veron, will love the Foster Harris House -- Diane and John are the most gracious and talented hosts. And thanks so much for inspiring me to go to the Inn in the first place. It was a very memorable trip!

Happy birthday to you!

Your post is making my mouth water, as if I'm sitting there enjoying the incredible dinner with you. What a way to ring in another year older.

Thanks so much, Kristen! It was certainly a once in a lifetime kind of meal. Thanks for visiting - I'm enjoying your blog!

Thanks for sharing such a thorough and descriptive review of your experience. I read one of the Inn at Little Washington cookbooks last week, and found your blog while doing an Internet search today. Your writing is beautifully descriptive - it made me wish I was there!