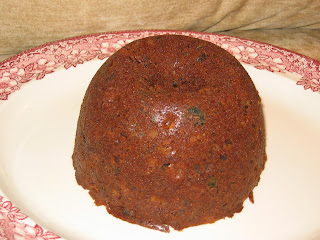 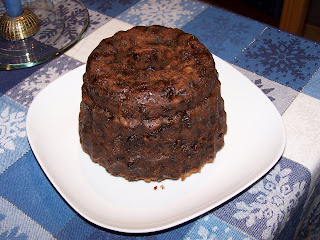 Twas the night before Stir-up Sunday, and all through the house, T.W. Barritt was learning how ill prepared he was to organize a successful plum pudding project …

I get home from New Orleans on Saturday night, anxious to get going on the plum pudding. I chop the raisins and start them simmering with the currants in two cups of water. It looks like an awful lot of fruit. The recipe calls for a large, 3-quart container. I eye the pudding mould. Then I decide to measure it. My fancy Christmas tin only holds 1 and ½ quarts. I start to scour the house for alternatives and find a second container to hold the overflow.

Stir-up Sunday dawns, and Jill finds that the Canadian weather is adding to the seasonal mood. She writes:

It's snowing a bit here this morning, so it seems like a particularly good day for this project. Just heading out for my morning run, so I can get that out of the way before the stirring starts. I've invited a few friends for lunch to help stir the batter....but that means I have to feed them as well. Time to get moving. More later on the results.

I measure out all of the ingredients and the final step is to prepare the suet. Mom has done her part while I was gone, and the suet is waiting for me in the refrigerator. I learn from her later that the butcher didn’t even charge her. He simply wrapped up the suet and wished her “Merry Christmas!”

Last night, I cleaned and froze the suet. That makes it easy to mince the fat into tiny pieces and dredge them in flour. The suet is suspended through the mixture and as it steams, the fat melts and gives the pudding its cake-like texture.

Stir-up Sunday is all about making wishes, according to Jill. As the master of the house, I grant myself three wishes – one for the world, one for my family, and one for me. I stir the brown sugar and spices into the flour and suet and for the world, I wish for recovery for the city of New Orleans. I stir in the eggs, brandy and sherry and wish for good health and happiness for my family. I stir in the raisins, currants, dates and citron and wish for myself a challenging new recipe to learn in 2007.

The fruits are jewel-like and remind me of gold, frankincense and myrrh as I fold them into the batter. The creamy, coffee-colored batter is thick with fruit and smells like cinnamon, cloves, fruitcake, George Bailey, Clarence the Angel and Christmas at Fezziwig’s.

I fill the moulds, place my puddings in their steamers, send off an update to Jill, and start to make a few ornaments for the tree. I’ve got at least four or five hours ahead of me, tending the puddings. By early afternoon there’s still no word from Ottawa, probably because Jill is busy feeding lunch to an army of holiday helpers. Then an update arrives:

Mine's steaming as well. Smells great, and the batter tasted good! I had some tiny assistants to help stir and make wishes. I only have a half-hour left, which is great because I really need to get some Christmas shopping done today. Think I will go outside and string up the Christmas lights on my cedar tree while I'm waiting.

Jill’s butter-based plumb pudding is done before me (top photo). She writes:

I return to the kitchen and sniff. I can’t smell anything. When I take off the pot cover, the dish towel that has been boiling at the base of the pot for several hours to anchor the mould actually makes it smell more like laundry day. There is a subtle scent of cloves, but maybe I’m too close to it.

Just before 8:00 p.m., word comes from Ottawa that the Grimwade Quick Cooker plum pudding with butter has been successfully completed. Jill provides a full recap of the Canadian version of Stir-up Sunday:

I’m up early for a morning run before the pudding assembly starts in earnest. With lightly falling snow and the sun shining through the clouds, it seems like a perfect day for pudding-making. The mixing begins at noon, with the help of my able young stirring assistants, Lucy and Thomas. Lucy won't reveal her wish, but all Thomas wants is for the cat to come out of hiding. Fortunately she obliges. But in all the excitement, I forget to make a wish! Oh well, there's always next year's pudding.
After mixing in a final dose of rum (and sampling a few tastes of the batter), the "Quick Cooker" is greased, filled, parchment paper put on top, and the lid tied on. I never did find any charms, but I think I'll slide a coin into the pudding before it's served on Christmas Day. The pudding goes into the steaming pot at about 12:30. There's a moment of panic about whether I'll be able to put the lid on the pot, but it just fits. In the meantime, I'm trying to serve lunch to some friends, so the preparations are a little hectic. No wonder I forgot to make a wish.
I check the pot every so often and top up the water. My recipe only requires about 3 hours of steaming, so at around 3:30 I decide it's time to take the Quick Cooker out of the steamer. I manage to avoid any major burns. After the pudding sits for five minutes, it's time to un-mould. The pudding slides out easily, stays in one piece, and I breathe a sigh of relief! The pudding looks and smells lovely. We'll know in 22 days how it tastes!
My recipe requires that the pudding be at room temperature before un-moulding and shortly before 9 p.m., I slide my pudding out of the mould (bottom photo). One tap and it drops onto the plate, fully intact and with a nice scallop design around the pudding. While Jill’s pudding is a beautiful amber color, mine is darker, like black coffee, and denser, and smells much like a traditional fruitcake. I worry about whether it has enough alcohol in it, but for now, I must think about returning to work on Monday and letting the plum pudding ferment in the refrigerator. Joy of Cooking says, “…the pudding will become softer, darker, and more flavorful with age.” Don’t we all?

Jill has the last word on our cross country plum pudding collaboration, until we ignite them as part of the Christmas celebration several weeks from now. She writes:

Hmmm. I wonder if pudding can be sent over the border?
© 2006 T.W. Barritt All Rights Reserved
Technorati Tag: Christmas
Posted by T.W. Barritt at Culinary Types at 9:30 PM

Your puddings look so good!

They are not part of tradition here in Brazil, and maybe that's the perfect excuse to make them - just to show people something good they don't know yet. ;D

what gorgeous puddings. I find it cute that you and Jill are making the pudding at the same time... cross border indeed!