A Tale of Two Puddings - The Recipes 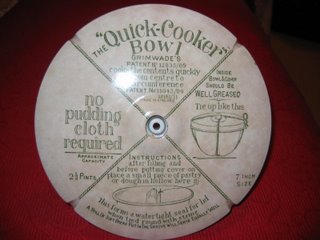 We are rapidly approaching Stir-up Sunday and the preparation of our Canadian and American plum puddings. Jill in Ottawa is still debating over the best recipe for her plum pudding, while I’m already committed to my selection in the Joy of Cooking. Give me a recipe in a best-seller and I’m good to go. Jill writes:

Decision-making not being my strong point, I'm torn between recipes from the “Canadian Living Christmas Cookbook,” “Julia Child's The Way to Cook” (both using butter), and something from Epicurious titled "Superb English Plum Pudding" It's a James Beard recipe from “House and Garden” in 1963. I'm leaning toward the latter, but it is fairly similar to the Joy of Cooking version. Of course, I also have a tree's worth of others that I printed from the Internet. On the BBC website, I found a little piece written about an early vegetarian version that didn't contain suet but included a pound of mashed potatoes, a pound of boiled carrots and two pounds of dried fruit. I'm not sure I'd want to try choking that down!

I give thumbs down to the boiled carrots as well, but you sure can’t beat Julia Child and James Beard. I like the contrast of Canadian butter versus American beef suet and suggest that Jill might go that route.

Meanwhile, I’m embarking on my own investigation of plum pudding – the history, the lore and the technique of steaming. The Oxford Companion to Food (Davidson) says that pudding “may be claimed as a British invention, and is certainly a characteristic dish of British cuisine.” It also extols the virtues of steamed suet puddings and says the high melting point gives suet puddings a lightness not attained with other fats. Tins and moulds came into use when pudding cloths became unwieldy for the homemaker. Sweet suet puddings reached the height of popularity in the Victorian era and there was even a pudding named for Prince Albert. I also locate the definitive reference in Charles Dickens’s A Christmas Carol:

“In half a minute, Mrs. Cratchit entered – flushed, but smiling proudly – with the pudding, like a speckled cannon-ball, so hard and firm, blazing in half-a-quartern of ignited brandy, and bedight with Christmas holly stuck into the top.”

Jill decides to go with the Canadian Living butter-based recipe in her classic "Quick-Cooker Bowl." With fruit soaking in an 80-proof hot tub and most ingredients in hand, we are nearly ready to begin our cross-country Christmas culinary collaboration.

Next: Stir Up Sunday

I have just purchased a similar antique crock in Ontario, CANADA with the printed mistake on the inside!