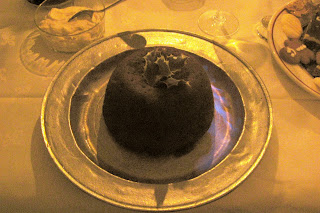 When last we left the “Tale of Two Puddings,” both the Canadian and American versions of the classic Christmas plum pudding were “aging” in the refrigerator awaiting their Yule tide debut.

On December 18th, Jill provides a status report from Canada:

“Well, a week from today will be the true test. I checked my pudding one day last week and it still seemed to be intact - and still looked and smelled good. Hope all is well with you in the frenzy leading up to Christmas.”

I’ve been afraid to check my pudding, to be perfectly honest. I’m a little nervous that if I open it, I’ll unleash Marley’s Ghost. So, for over three weeks, the foil wrapped pudding has been taking up an incredible amount of space in the refrigerator, as I try to squeeze in condiments, cheese spread and egg cartons around it. I hear an announcer disparaging plum pudding on the radio, and I stick my fingers in my ears.

The days leading up to the holiday pass quickly. There are cocktails with colleagues in Manhattan and Christmas Caroling parties closer to home where most of the singers end up wearing felt reindeer antlers. Jill checks in on Christmas Eve as holiday preparations accelerate towards the Canadian lighting of the plum pudding:

“Merry Christmas! I'm finally taking a break (and sipping a kir royale) before moving to the next stage of dinner preparations. Have baked and decorated gingerbread cookies and made blueberry white chocolate clafoutis for tonight's dessert. Now the salmon, rice and salad remain. I did manage to squeeze in some skating with my niece and nephew this afternoon. In Kingston, where my parents live (and where I am now) there is an outdoor rink behind the historic city hall, so it’s a really nice spot to skate. Artificial ice, of course, given that it's unseasonably warm here too. Not a speck of snow. Tomorrow we'll have the turkey and the plum pudding (!) And then another big feast on Tuesday when my sister and her husband and kids arrive. I'm off until Jan 3rd, so I'll have some time back in Ottawa to relax after a few days with 9 adults, 4 kids, 2 dogs and a cat. It gets a little chaotic! Hope Santa is good to you tomorrow! I'll send the pudding photos as soon as I can, possibly tomorrow evening, but Tuesday morning is more likely as we usually get caught up in a cut-throat board game on Christmas night.”

Several days pass with no word, and I’m beginning to wonder if the Canadian Plum Pudding suffered a setback. But, in fact, the delay is only the result of a large Canadian family still digesting their Christmas dinner. Jill sends a full report on Thursday night:

“The pudding was a success. It actually tasted quite good, and about half was eaten on Christmas night, by seven of us. Quite a bit of hard sauce was consumed as well. I think my father has polished off most of the rest of the pudding since then. It had a very nice texture - - not as heavy as some that I've tasted, which I expected given that the recipe had a bit of baking powder in it. The reviews were good - hopefully everyone was not just being polite! All in all, a successful project... and I'm beginning to think about next year's version. Have to run, since my niece is harassing me to let her back on the computer. I'm heading back to Ottawa tomorrow, so will have a few days to relax - and try out my new copper pot for beating egg whites - before going back to work. Hope you had a good Christmas. Look forward to hearing your pudding results. I think the big day is Saturday?”

Jill is correct. I’ve decided to squeeze every moment of entertaining out of the holiday, and ten guests will descend on my house this coming Saturday for the ceremonial lighting and tasting of the American Plum Pudding. My cousins have been instructed to bring a fire extinguisher. As they say on television – Don’t touch that dial!
Technorati Tags: christmas holidays
© 2006 T.W. Barritt All Rights Reserved
Posted by T.W. Barritt at Culinary Types at 8:18 PM

I'm sure everything will be great. Can't wait for your report on that though.