Some Zany Good Luck, a Cavalcade of Crustaceans and Lunch at the Library 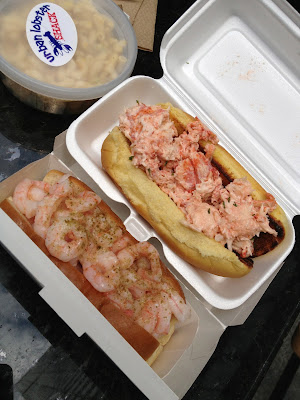 My pal Zany pings me one weekend in early July:   "Good morning!  Who said Friday the 13th brought bad luck?  Turns out I'll be in town and available for lunch/a food adventure if you're around and available..."

I couldn't be more thrilled.  Lunch has been a little lackluster lately and it’s been months since our last food adventure in Chicago.  I immerse myself in research and start monitoring Twitter hourly for the latest and greatest food trucks crisscrossing Manhattan. Zany would expect nothing less.  I’m not finding an obvious choice.  Many of our favorites still haunt midtown, but I’d like to try something different and most of the tasty new options are clustering downtown in the Financial District these days.    I'm also a little nervous.  In recent months, Zany has become quite the international gourmet.

Friday the 13th arrives and I am feeling lucky.  Luke’s Lobster Truck is in position on 46th and Vanderbilt, but I’ve also got an eclectic list of backup options ranging from Mediterranean to Greek.   Zany arrives at my office at the appointed time and she's already on the case.   She hasn’t lost her food truck mojo.  Walking across town, she’s spotted the Urban Lobster Shack Truck, parked near Luke’s as well as the Bistro Truck, which features a crab cake sandwich.    “Let’s visit them all,” she suggests gamely.  “It will be like a New England seafood sampler.”

Zany hasn’t lost her mojo, or her appetite.

As we’re hoofing it over to the East Side, we run into a VIP on the street – my boss.   We chat for a minute before Zany serves up her big news.  “I’m eating for two!” she announces.   Yes, she and Luigi the Baker are expecting in December!    It’s very exciting, and she’s happy to break the news on Culinary Types.

We zero in on the Urban Lobster Shack Truck, an arresting fire engine red vehicle, with a giant lobster mascot sitting in the drivers seat.  Our kind of joint. 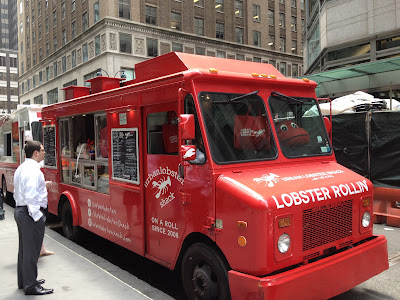 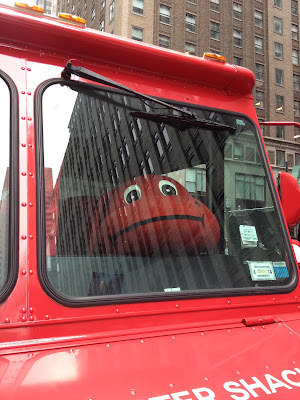 The truck’s slogan is “On a roll since 2006.”   Wish I’d been on a roll since 2006.
After a quick perusal of the menu, Zany decides we should kick off our seafood smorgasbord with the “Famous Lobster Roll” and a side of “Homemade Old Bay Pasta Salad.” 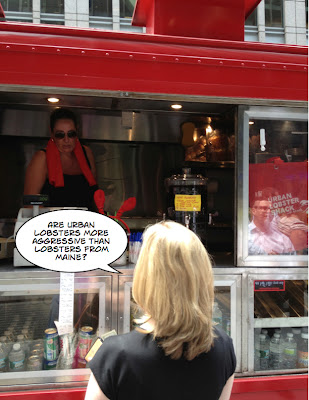 We also get two servings of Maine Blueberry Virgin Sangria. 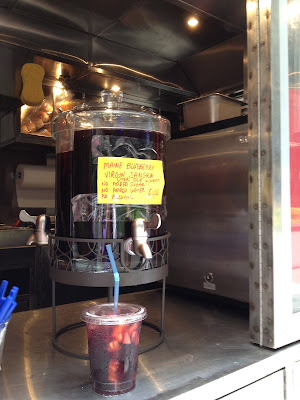 Perfect for Zany’s current state, and perfect for an afternoon of dining at the shore. 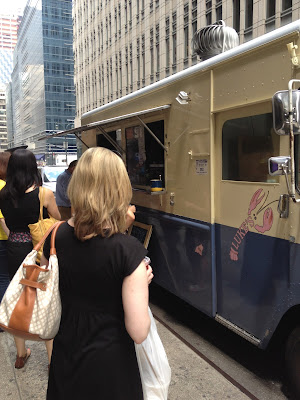 Next we head a block or so over to Luke’s Lobster Truck.   Luke’s truck looks a bit like it might have weathered a Nor’easter, but it does profess some genuine New England hospitality. 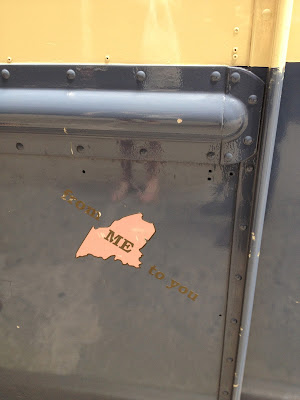 Here we decide to go for the Shrimp Roll – a split bun, heaped with pink, curly shrimp and drizzled with warm butter.   Zany nearly hyperventilates as the guy in the truck drizzles the butter using a giant baster.  We find a spot for our little seafood feast at an outdoor promenade on Park Avenue. 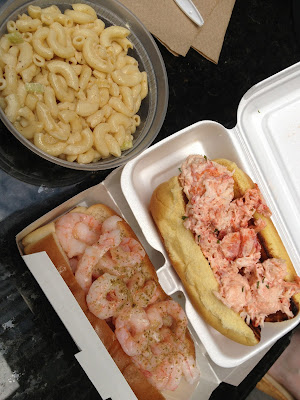 Zany picks up the lobster roll, and pries it in half with her hands.   She hands me my portion.  “From Me to You,” she says, and takes a bite of her half.  “I love lobster when you don’t have to work for it.”

It is an exquisite creation – big, succulent chunks of lobster on a toasted potato roll.   The pasta salad is light and refreshing, with just a hint of the Old Bay. 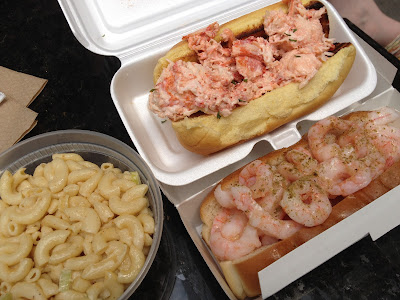 I always admire Zany’s ability to revel in the moment.   “It’s almost like you can hear the sound of ocean waves and seagulls,” she says referring to the din of traffic and pigeons on Park Avenue.

The shrimp are lightly seasoned and nestled in a toasted bun, spread lightly with mayonnaise.  The bun is not soggy, which Zany notes is the mark of a true seafood chef. “When I saw that butter baster, I knew it was love at first site,” she says. 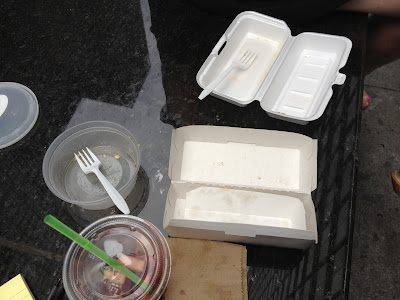 Next, we head for the Bistro Truck, which features a variety of Moroccan style fare.   Park Avenue in the 40s has become the new food truck haven.  Zany counts 12 trucks as we are strolling along the avenue.  The lines are long, with many smartly dressed financial types anxiously awaiting nourishment.  “It’s a friggin food truck circus out here,” she says. 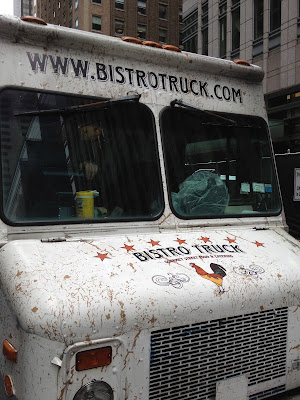 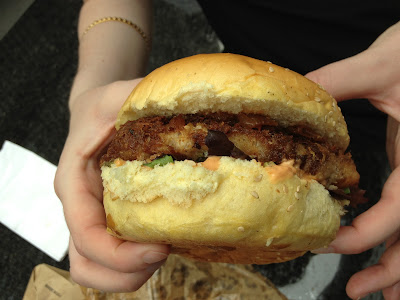 The crab cake sandwich completes our seafood triple threat.  The cake is massive, and stuffed with all kinds of yummy things.  We can see shrimp mixed into the crab cake, and the whole thing is seasoned with Moroccan spices and topped with some meltingly good caramelized onions.  It’s the perfect finale to our seaside buffet.

“I think I’ve fulfilled my shellfish requirement for the day,” says Zany, primly folding her napkin and collecting the trash.  She pauses for a second.  “Let’s see.  We’ve had lobster, shrimp and crab – that’s all the major seafood groups.  Well done!”  She adds, "Do you know what Mad Me-Shell would like least about this menu?  No red meat!"

Before dessert, we decide to make a quick side trip to the New York Public Library where the exhibit “Lunch Hour NYC” is currently on display.   I believe a little side dish of education is always good, and it’s important that we have a better understanding of our place in New York lunch hour history. 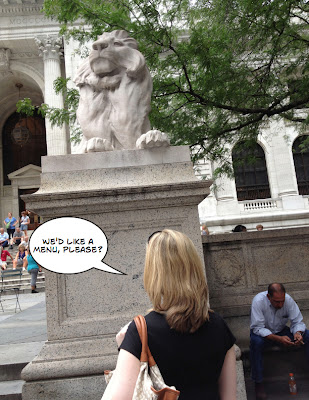 In the exhibit, we learn about school lunches, street carts, power lunches and the world famous Horn & Hardart's Automat, once the height of lunchtime chic in New York City. 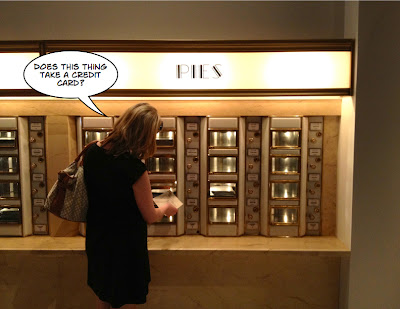 There’s even a singing coffee spigot, which Zany finds a bit perplexing. 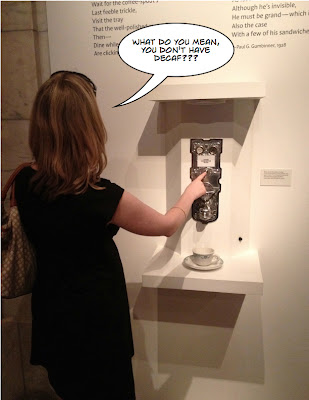 As we wrap up our tour, I say, “I think we need something sweet for the walk back.”

“Look through the door,” says Zany in a hushed tone. (It is a library after all.) Perfectly framed in the library entrance is a vision of a Mister Softee Truck – the original food truck – bathed in a golden light and parked on the other side of Fifth Avenue.

I pause for a second on the steps of the library.   “You know, I don’t think that’s actually a Mister Softee,” I begin.  “I think it’s one of those knockoff trucks.”

“Oh, let’s do it,” says Zany.  “New York is full of knockoffs.”    We order two vanilla/chocolate swirl cones and make an ice cream toast to our lucky day. 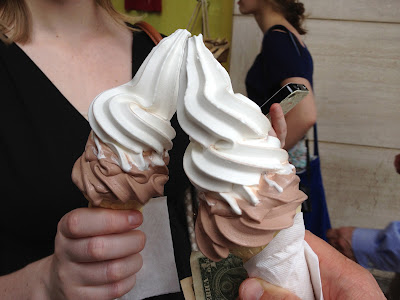 Cheers, Zany on your blessed event and your triumphant return to New York street food!  It was nice to have you back where you belong! 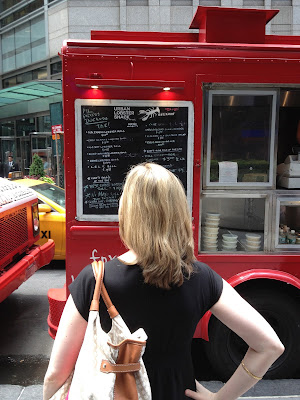 As always, an awesome tour. Makes me want to stop by Grand Central's hood ASAP! The trucks are really getting to be little works of art, aren't they? I am amazed at the quality coming out of them Also, the idea that you can have a restaurant with little overhead and get your feet wet in Manhattan without the $1mill investment in a storefront is awesome. Kudos to all!

Now that is a seafood excursion! Congratulations and best wishes to Zany - I know from experience that big flavors during pregnancy make for a baby who likes a wide range of flavors! (chocolate every day is also a good idea!)

I would have thought I had died and gone to heaven if I found this much New England seafood in the Manhattan food truck scene. Truly a delight knowing my love of seafood.

That shrimp roll (with butter, of course) certainly hit the spot! And I like the suggestion on chocolate - I might have to incorporate that into my daily routine :)

those are some fat daddy sandwiches - wow

Oh you two! You sure do know how to perk up a girl's day! I'm stuffed just thinking about your culinary travels throughout the city. What I wouldn't do for a smidgen of each and every one of your tasty lunch treats.

Congratulations Zany. December? Just in time for all the holiday goodness:)

Thank you so much for sharing, T.W. A memorable day with dollops of friendship and tasty bites; priceless...

Me again! Just had to tell you how much I appreciate that link to the New York Public Library Exhibit. Very cool! I'm making a vow to visit it; no matter what!!! Thanks again T.W. I even pinned it, lol...

Oh! Lobster! Crab cakes! I am so jealous of your food trucks! Can you send one this way? I always enjoy your Food Truck adventures with your friend Zany.

Love the sense of humor the lobster people have....that alone would make me stand in line! You two found quite a line up of seafood; the crab cake looks fabulous. And the soft serve ending is right up my alley. Hope it wasn't overly hot that day so your cones melted before you could get it in your mouth.
Congrats to Zany!

I am indeed quite sad that I missed out on such a glorious, and delicious, reunion! And the tap of coffee is RIGHT up my alley! You could have just left me there. Of course, you are right in noting my sadness that no meat or bacon was consumed. An oversight that would NOT have occured had I been along for the ride!!! That shrimp looks amazing, though!

I'm so envious of your culinary excursion. I would have loved to have joined you for the NYPL part but I was working! We never get a lunch hour!

I'm very impressed that the two of you tasted so much food plus a cultural stop at the library all on a lunch break. It sounds like good eating to me.

What a fabulous lunch! What a perfect way to celebrate the coming of Zany's Christmas baby :-). I guess the event will make you an honorary uncle who is responsible for palate development.It sounds like you both had a fabulous day. I hope you enjoy this one as well.

I can't think of a better way to spend a lunch hour than with your favorite foodie friend, trolling food trucks.

What a great & tasty foodie tour through New York!
Waw! You 2 ate all of that food: that's a lot though but you were eating & savouring gourmet & stylish foods! That's great!

I loved the little text messages that you wrote above her! hahahahahha,...really funny too!
Those stunning food trucks don't exist in Belgium! Too bad though! It would be a huge success, I would think! :)

It is so much fun to read about your excursion with your mysterious friend Zany (will we ever get to see her f.a.c.e??)
I am wishing Beirut had food trucks now, but, wait, we have food carts everywhere instead.