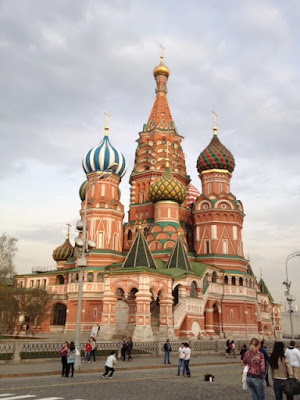 I used to travel to far-flung locations and eat exotic food, but these days I’m usually found trudging through domestic terminals, with my most unusual food option being a bag of Peanut M&Ms.     So, I was more than happy to live vicariously when I received this intriguing travelogue from Zany, although I’m still patiently waiting for the bottle of vodka she promised me.

I think I’ve finally caught my breath – or at least adjusted back to the Central time zone.  You see, I recently spent a week under Moscow Standard Time so there was quite a bit of time difference.  And although I traveled to Russia for business, you know I had to eat at some point!  And so my adventure begins…

It was Friday late afternoon and I had just finished a week of meetings and trainings.  Before my departure back to the Windy Cindy, my Moscow colleague Natsya decided on one last Russian escapade (she had already taken me sightseeing earlier in the week).  We were in her car driving toward the city’s center and she began rattling off ideas.  Concerts, more sightseeing…and then she mentioned food.  During the week I had ATTEMPTED to indulge myself on authentic cuisine, but my non-existent dictionary of Russian words and having mistaken a currency exchange shop for a food truck left me discouraged.  So, obviously I jumped at the chance for a native to show me the city’s culinary side.

Natsya knew just the trick and after a serious Moscow traffic jam, we parked near what looked like a beautiful park. 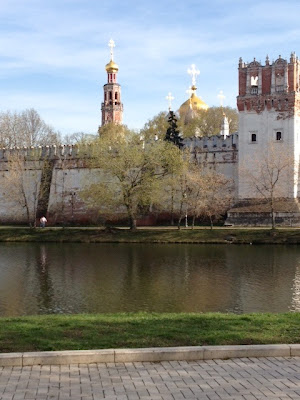 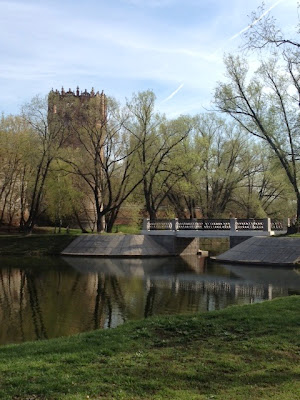 It turns out this wasn’t park, but a convent – the Novodevichy Convent and Cemetery.  Natsya was a very well-informed tour guide and as we walked through the paths she explained that many important people were buried at this cemetery, including Boris Yeltsin.  As we walked along the convent’s wall I gasped as I saw people with markers vandalizing the wall.  Natsya whispered that these weren’t graffiti artists, but rather people writing to Saint Sophia – the convent’s saint – asking for help.  We stopped and Natsya translated some of the requests – help for sick family members; help for finding love; and a request from an elementary student for help with his math. 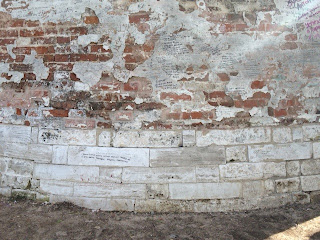 My awe of the gold-topped convent began to wane as my hunger grew.  It turns out that Natsya just wanted to burn some extra calories for what we were about to encounter.  We crossed the street and approached an odd-looking building that reminded me of an old train car.  This was our culinary destination? 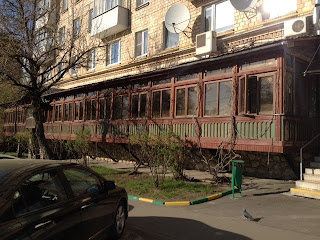 I was even more perplexed by the restaurant’s aura – interesting artwork and a quartet of singing men. 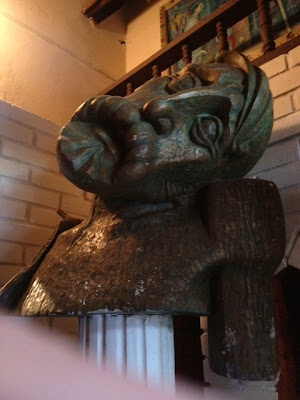 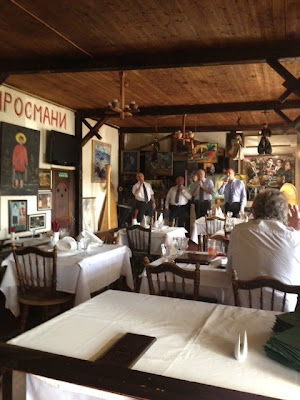 I began to wonder what I had gotten myself into as we were ushered to a table, but then I noticed a number of framed photos showing famous people in the restaurant.  Bill Clinton was here?

Smiling, Natsya explained we were at U Pirosmani, a famous Georgian restaurant.  With menus in hand, Natsya inquired what I liked.  I didn’t open the menu and simply stated – “I’ll try anything.”  Shocked, she leaned forward and asked, “Anything?”  I leaned in closer.  “Anything.  Show me the authentic Georgian experience.”  Natsya relaxed in her chair and for three minutes spoke in Russian to the waiter who occasionally looked at me in surprise.  I started to get nervous – was she doing the one-of-everything approach on a full restaurant menu?!

Fifteen minutes later my suspicions were confirmed – I think she ordered one of everything (at least of the small plates!). 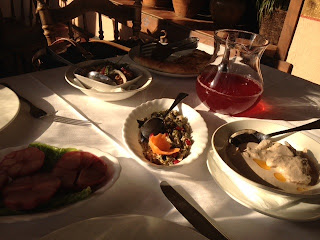 A thin bread with goat cheese (similar to Naan), a bean satay, an artichoke and grass spread, baked chicken in a flour sauce and pickled garlic decorated the table.  With Natsya’s guidance, I used the bread to eat the satay and spreads. 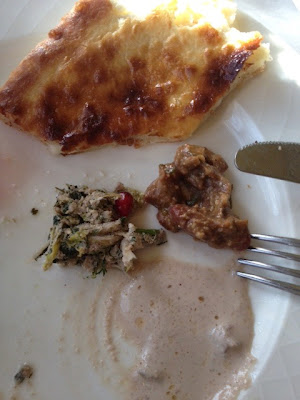 I marveled at the color of the pickled garlic for quite some time.  It reminded me of your adventure at the Stinking Rose!  About seven cloves of garlic in, I contemplated what I might smell like on the flight home tomorrow and resisted finishing the plate. 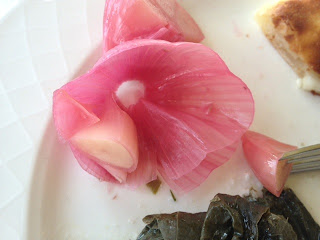 Just as I opened my mouth to express my fullness, the waiter delivered round two.  Natsya laughed.  We were presented with grape leaves stuffed with cheese, rice and veal and the day’s “tender meat” – which also happened to be veal.  I buckled in for round two. 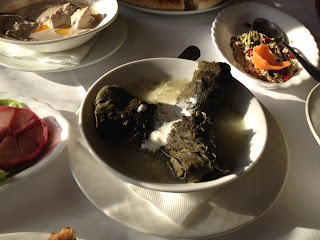 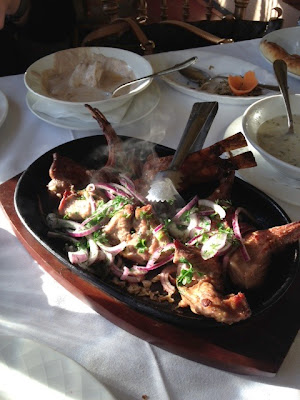 As we waddled out of the restaurant Natsya exclaimed, “One more stop!”  Of course, no dinner is complete without dessert.  Natsya drove us to the Sky Lounge, which used to be an aviation museum that is now mostly empty but uses its top floor as a restaurant and lounge.  From the lounge there are incredible views of the city, and our table positioned us in the direction of Moscow University. 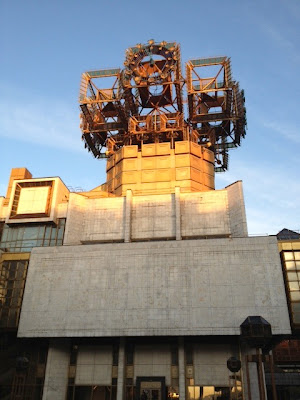 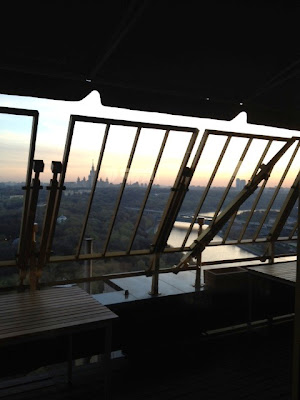 In keeping with my focus on traditional cuisine, Natsya guided me in the direction of Chinese pu’er tea, which tasted thick and smoky.  We also decided to split a dessert with the translated name of “Bird’s Milk.”  When it arrived, I anticipated a silky smooth ice cream texture, but was shocked to taste that the filling had a spongy texture that wasn’t overly sweet and overwhelming.  It was the perfect ending to an adventure with many distinct flavors. 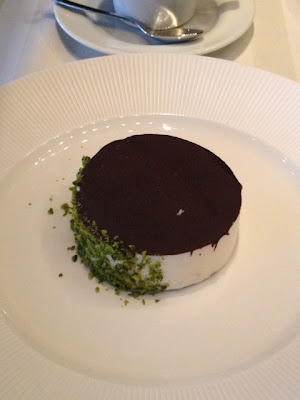 I returned to my hotel with three hours to spare before my car came to collect me. I reflected on my amazing authentic meal as I re-packed my suitcase. But, before too long I recalled that pickled garlic and decided to shower and change before I left for my 12-hour flight!

Email ThisBlogThis!Share to TwitterShare to FacebookShare to Pinterest
Labels: Food on the Road, Russian Cuisine, Zany and Company

What fun to enjoy a bit of armchair travel first thing in the morning! I've always wanted to go to Moscow, and I'm so glad she got to experience a bit of the city while she was there for work.

This is the part of travel I love the most- the discovery best found by someone who lives there. This was awesome. Love, love these types of experiences.

What fun. I'll try anything turned out sounding like it was a little of everything. What a fabulous way to experience the cuisine of another country. Good on ya Zany. You're an adventuresome soul.
Sam

What a fun post, Zany! I felt as though I was right there with you. Natsya was a godsend! And all on your last day, too.

I love the way Zany says she'll try "anything." Giving oneself over to another culture's cuisine can be anxiety producing, but also (hopefully) unforgettably delicious.

Such a lovely post to enjoy sitting in my couth. It was fun reading, all about it & seeing the pictures too!

That sounds like a true food adventure. Nothing weird and every thing sounding terrific.

I read about Georgian food in Paula Wolfert's book so this would have been so interesting! Thanks for sharing your friend's adventures in Moscow!

I'll have one of everything - I don't think that request is made enough. The food sounds amazing. I've had pickled garlic and loved it, but it didn't look as beautiful as pictured above.

Although it is brave to put oneself into the hands of a native at a restaurant... the rewards far outweigh the fear-factor. Look what you get to eat? If she had ordered herself, a kindly waiter would have given her food that he thought an AMerican would like... boring.
Now about that pickled garlic... MMMMMM.

When traveling there is no substitute for a friend willing to show you the ropes - or the restaurants. It sounds like a great adventure and the descriptions of the food have made me hungry. Have a great day.Blessings...Mary

Dear T.W., What a wonderful experience. It is so nice to try the real authentic food. Blessings, Catherine

Two words: Yu- um! The food sounds fantastic -- and the pictures are gorgeous! Glad you got to have some fun and eat some tasty food!