Shades of Blue at Restoration Farm 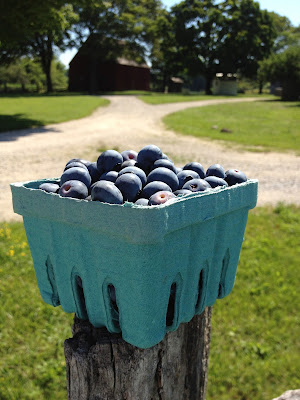 Have I stepped into another century?

I am ambling down the wooded dirt road to Restoration Farm, when I stop abruptly.  Standing some twenty feet in front of me is a blue-coated Union soldier holding a rifle.  A little girl –perhaps 4-years old – dressed in a country smock, her head covered in blonde ringlets, accompanies him.    It is a strange vision.  She says “Good morning.”  He doesn’t seem to notice me, and takes a drink from his canteen.  She wanders over to admire the patch of sunflowers.

Normally I would attribute this scene to the fact that Restoration Farm shares land with a mid-19th century historic village.   One will often hear the sound of gunshots and encounter reenactors of Civil War history.    Yet, when I turn back for another glance, I don’t see the soldier and child.   Were they apparitions?  Did they disappear into the woods, or bygone days?

I can’t quite shake the image of the soldier in his dark blue shell jacket as I head for the berry patch.    The blueberries of Restoration Farm have come in.   At one point in my hectic life, the idea of picking blueberries on a Saturday morning might have seemed just as unlikely as the possibility of encountering a Union soldier on a dirt road.   Yet, Restoration Farm reminds us that the simple pleasures in life – like picking a pint of tart, juicy blueberries on a summer morning – are still there for our enjoyment. 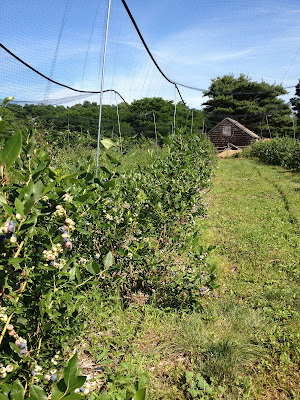 The bushes are thick with clusters of blueberries.   Planted in 2009, this is the first year the blueberries have yielded significant fruit.   Head grower Caroline Fanning is happy that the blueberries are thriving.  Planting the bushes was a grueling project, she recalls.  These blueberries symbolize the kind of patience needed when one believes in seasonality. 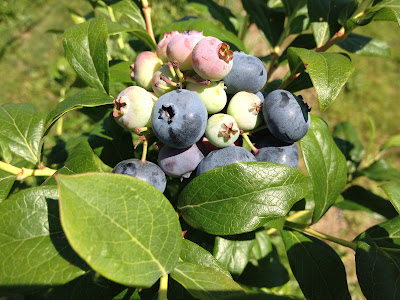 The rows of bushes smell of fresh mulch as I stoop to pick the dark blue berries.   Like the encounter with the soldier, the act of foraging for ripe blueberries is a snapshot in time, a moment to remember – a moment to simply be. 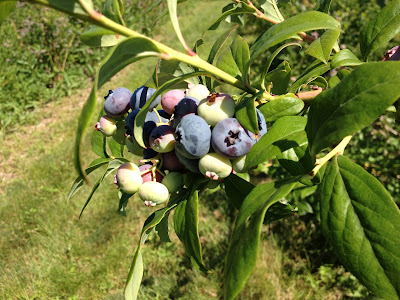 So how might I enjoy Restoration Farm’s first significant harvest of blueberries?    These bright, tart berries should be served in a decidedly old-fashioned way, perhaps in a vessel that the Union soldier might have used to cook over an open hearth. 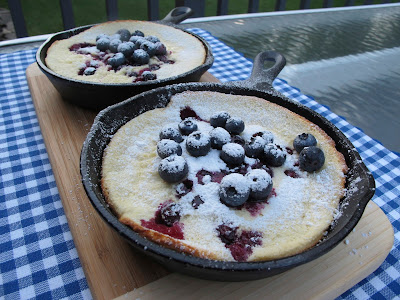 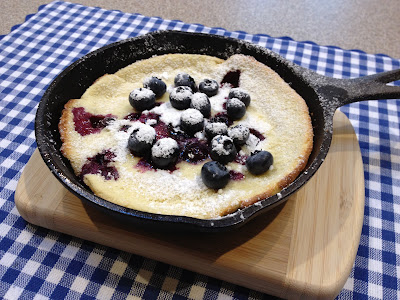 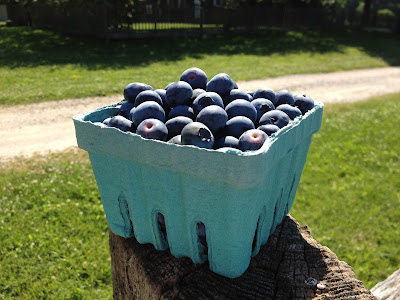 For a moment there, I thought you might have walked into a Civil War reenactment. The people that participate really do a splendid job of playing their part.

Blueberries....one of my favorites and how fun to prepare the Dutch pancakes in a black iron skillet. We just might call it Civil War style.
Sam

What a great post. Those Dutch blueberry pancakes look divine! Thanks, T.W.

We had Blueberry Pancakes with fresh picked Restoration Farm blueberries last weekend, but your post makes me think we should have them every weekend. Nice storytelling!

I love the idea that there might be ghosts from the past lingering around at Restoration Farm, supervising the growing and keeping an eye on the current-day stewards of the land.

Yum, your Dutch pancakes look terrific. I've never had them before...looks like I'm missing out on something good.

Berries are the delights of summer. I don't know if I would have had any left for Dutch pancakes if I were doing the picking. Your restraint was well rewarded.

I love your blueberries recipe and love the pictures are awesome!:)resi

I remember picking wild blueberries when I was a kid...while we were on the boat in Georgian Bay. Mother would make a blueberry pie with them. Nothing smelled and tasted better, even without ice cream.

Wow T.W. must be on the same thoughts for meals! I just posted blueberry pancakes!!
I love cast iron cookware no matter what the century. They really do cook everything better.
The individual pancakes look adorable and delicious.
As for the soldier and little girl...I think it is good fun...
Blessings friend, Catherine

You threw me for a lop...So, did you really see a union soldier and a young girl? Ghost or Civil war reenactment?

Each year, we pick 20+lbs of blueberries and freeze to enjoy until the following season. This year, it was a bust. We made up for it with blackberries.

You sure do know how to celebrate. A bit of mystery and dollops of goodness make a "gal" just want to jump into that dish of Blueberry Dutch Pancakes!!!

I've been talking about getting Blueberry bushes for 3 years now. I had better get a move on before these ol' bones start a crackling!

P.S. I tried to click over from my comment section and it said user profile not available. I'm sure it's just a blogger glitch but I just thought I would let you know:)

Very well written and enjoyable read! Love blueberries, and miss them as they are not grown here (wonder why?)

What a great & well written post!
Did you see the soldier & the little girl later on?
These blueberry Dutch pancakes look utterly tasty!

I wish we had such a farm nearby Mechelen, where I live!

I love the pancake idea!! Leandro is loving the blueberries. He does not, however, believe in farm to table. He believes in farm to mouth!