Flavor, Labor and Neighbors at The Farm at Sunnyside 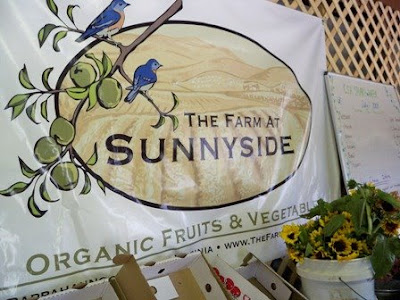 Breakfast has concluded at the Foster Harris House, and John MacPherson sheds his chef whites in favor of a green tee-shirt, shorts and baseball cap. We hop in the truck and head out into the rolling hills of Rappahannock County. Chef John is putting together a special dinner and he is in search of local ingredients.

We drive several miles and finally arrive at The Farm at Sunnyside, a source for much of the produce prepared at the Foster Harris House. The farm was established in the late 1700s with an apple orchard and some cattle. In 2006, Nick and Gardiner Lapham took ownership. The CSA program has 65 members and has been in operation for two years. 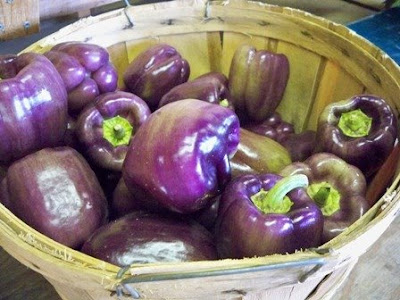 We park the truck and enter a wooden structure. I am introduced to Casey Gustowarow, a young bearded man in a red tee-shirt and one of four interns working on vegetable production at Sunnyside. Casey is the CSA manager. Immediately, my eye is drawn to bins of vibrantly-colored vegetables in shades I don’t always see. There is rainbow Swiss chard, eggplant the color of indigo, blush-pink potatoes, purple bell peppers and sun-drenched gold tomatoes. 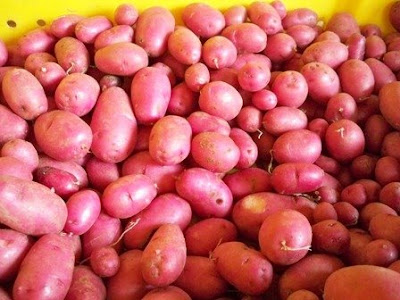 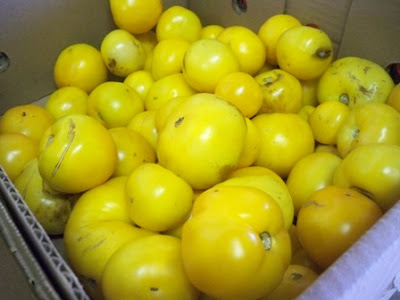 Chef John is like a kid in a candy store as he looks over the selection. I’m getting a sense of the chef’s creative process. He has no shopping list, but as he examines the produce and the range of colors and textures, his plan for the dinner begins to take shape. 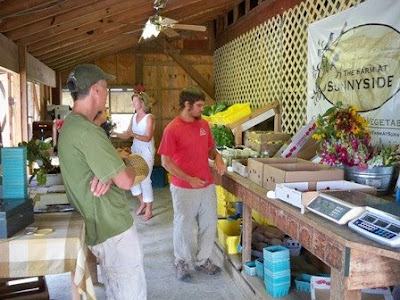 As John looks over the produce, I chat with Casey. He graduated college with a degree in biology, joined the Peace Corps and did conservation work, but found himself drawn to sustainable agriculture and a desire to provide sustainable food for others. He says community sponsored agriculture brings people together around food.

“I like the CSA a lot because everyone comes to the farm, rather than dropping off a box somewhere,” he tells me. “I really like that people get a community feeling – you know, come here, and talk to their neighbors and exchange recipes.”

It turns out Casey knows a lot about the subject of local food and has been a proponent at the highest level of government. He says interest in sustainable agriculture is increasing and change is possible.

“I went around on a crazy bus tour to get the White House to put a garden in,” he tells me. “Around the country, everywhere I went on this tour, people were incredibly interested in the local food movement and changing the way we eat in this country. And luckily, the President, or the First Lady, decided to do something about it, so I’m glad that’s the case.” 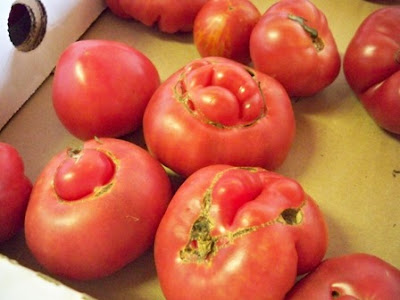 As we chat, Casey will periodically stop to talk with CSA members. He takes a minute to extol the virtues of the Cherokee Purple Tomato, a chunky fruit with deep-colored flesh.
“This one says, I am a tomato!” he tells a member.

Chef John takes note. “There is a tomato salad in our future,” he tells me.

Casey will often make recipes available for members. “I try to put out recipes – and every once in a while I’ll cook something and have a sampling,” he says. I ask him if the farmer is ultimately focused on the plant, or the taste that people experience.
“I think a lot of small scale farmers really care about delivering a good product to their customers,” Casey replies. “For me, I certainly think about what I would want to grow is what I would want to eat and how I’m going to prepare it.” 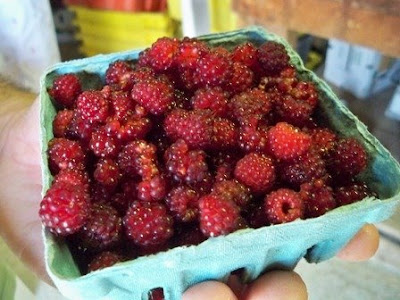 I’m admiring the perfect potatoes and notice that Chef John and Casey are deep in consultation. Casey disappears and returns shortly with a cardboard basket of tiny, jewel-like red berries. They are wineberries – a relative of the raspberry – and they grow in thorny bramble bushes all over the countryside.

Chef John considers their potential for the menu that’s been percolating in his head. The wineberries may find their way into a dessert. He drops a tiny berry into his mouth and offers me a taste.

“They’re like little pockets of summer,” says John “They’re like sweet-tart caviar the way they pop in your mouth.”

We return to the truck and bounce along a meandering road out into the vegetable fields. Shortly, we spot a woman on her knees tucking bright shocks of lettuce into a long plastic white strip. The midday sun is hot, and the attentive Virginia gnats are swarming. John introduces me to Emily Cook, who manages vegetable production at Sunnyside. 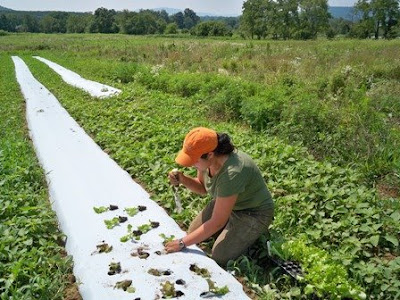 “I’m transplanting lettuce which we do every week,” explains Emily. This season, they have planted 30-35 generations at Sunnyside. The white plastic strip is used for week control. She tells me that varieties such as New Red Fire, Tropicana and Jericho do really well in the summer.

Emily has a Master’s degree in horticulture from Penn State. She started farming in 1997, shortly after completing her undergraduate degree.

“I went back to DC where I grew up and started looking for a real job in the non-profit world,” she says. “I couldn’t find one. My mom sent me out to get some cucumbers one day and mentioned there was a little farm stand in town. It was the first farmer’s market I had ever been to. I just stood there and thought, My God, I’ve never seen half of this stuff. What is kale?”

Shortly after, she started working at the farm stand, and then worked on several farms before completing her graduate work. She tells me that organic farming is not without perils. Right now the staff at Sunnyside is desperately trying to keep the tomato crop healthy, as a late blight attacks tomato plants throughout the mid-Atlantic region.

I ask her what people take away from their experiences at the Farm at Sunnyside.

“I model our CSA as a CSA that I would like,” Emily says. “I think they get huge diversity. We try to give them more choice than a lot of people get at a CSA. They’re getting the freshest produce that anyone could possibly get. And, hopefully learning a little bit and making friends with people who are interested in food.” She says that CSA members become much more conscious of the effort required to grow wholesome, nutritious food.

“People are thinking about everything that’s going into producing their food, which I think is really important,” says Emily, mopping perspiration from her brow. “It just makes people more aware of how hard it is – like all the little steps that go into this head of lettuce. It started in the greenhouse a month ago, and somebody had to mix the soil and fill the flats and then seed, water for a month and fertilize. Now, somebody’s on their hands and knees out here putting it into the ground.”

Along with gorgeous varieties of summer lettuce, the best of zucchini – tended with care – is now available at farmers markets and CSAs. At The Farm at Sunnyside, Casey Gustowarow recommends a recipe that adds a dash of spice and heat to all that summer goodness:

Put the olive oil in a medium frying pan and heat to medium-high. When hot, sauté onion and garlic for 10 – 12 minutes until onion is soft. If necessary, reduce heat to avoid browning. Add tumeric and stir once. Remove a third of the onion-garlic mixture and set aside. Add the zucchini and salt to the frying pan and return the heat to medium-high. Stir and cook for 1-2 minutes or until the zucchini begins to release a little liquid. Cover, turn heat to low and cook for 10 minutes, until zucchini is soft. Uncover, add the cumin, cayenne, black pepper to taste and tomato paste. Mash zucchini with a potato masher in the frying pan, allowing it to cook gently as you do. Keep cooking and mashing for a minute or two, until you have a course, well-mixed puree. Add the reserved onions and mix well. Serve hot, warm, at room temperature or chilled.
©2009 T.W. Barritt All Rights Reserved
Posted by T.W. Barritt at Culinary Types at 12:05 AM

I love following your explorations in Virginia. One thing I'm wondering now is whether there are fewer CSAs that have a work requirement? Early on, almost every one did -- work a certain number of hours per month on the farm as part of the CSA membership. Now I seldom hear of that.

wow this is totally 'virginia illustrated' what fun!

Lydia -- I think you're right, that very few CSA farms still have a work requirement. My guess is that it's probably more effort to manage than it's worth.

But, T.W., those tomatoes!! I can't wait till I'm south of the New England tomato blight, to taste me some of those. Great stories of Sunnyside!

Your excursions to Virginia are my very best favorite stories. How you manage to get on such an intimate level with your hosts is indeed captivating.

Gorgeous photos T.W. I want one of everything!!! Make that two or three...I'm saving the Puree of Zucchini recipe for sure!!!

So much fun. More..more! Love that you are exploring Virginia, knowing that it's in my backyard makes me look forward to the places you discover!

Thanks for taking me along on your educational CSA trip. I have never seen purple bell peppers before! Wow! I'd love to taste one. There is nothing like organically grown, fresh picked produce. I am one very spoiled foodie, living in the middle of something similar to this. Lovely!

Thanks for sharing the Virginia CSA with us T.W. I like the opportunity to see the ones in different regions.

nice to learn something new this morning TW :)

I'm smitten with those purple bell peppers. I've seen them in many colors, but that's new and fabulous to me!