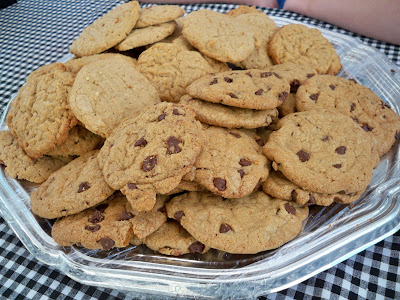 There’s a lot of goodness baked into Casey Blankenship’s homemade chocolate chip cookies. Folded into each delectable batch are scores of rich, silky chocolate chips, a dash of dedication, a sprinkling of business acumen and a spoonful of public service. Casey Blankenship is an extraordinary baker – and at age 14 – he is one exceptional teenager. 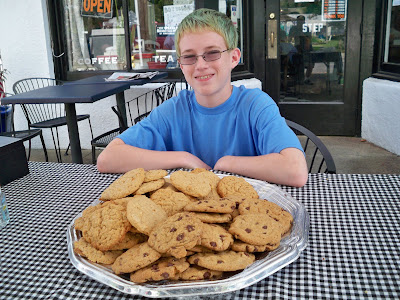 Each Saturday – while most of his peers are still asleep – Casey rises at 7:00 AM and packs dozens of cookies – baked the previous night – into a wagon, which he pulls to the edge of Huddy Park in Highlands, New Jersey. There, he sets up a card table, attaches a placard printed with the words “Casey’s Cookies,” and puts out a spread of chocolate chip, oatmeal, peanut butter and snicker doodle cookies. By 9 AM he is opened for business and is selling his cookies to a loyal clientele who also visit the farmers market held at the park each weekend.

Casey has taken the iconic neighborhood lemonade stand to a new level. Through word-of-mouth and a smart distribution program, he does a brisk trade. Ten percent of all his profits are donated to Heifer International, a fact that is prominently noted on his glossy business cards. 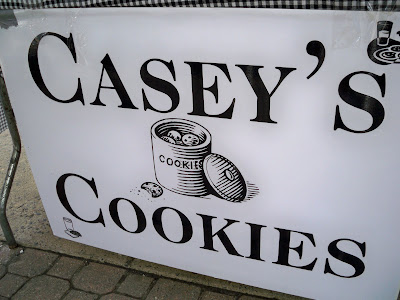 I meet up with Casey at his headquarters, in front of the Water Witch Coffee & Tea Company on Waterwitch Avenue in Highlands. He is trim and wiry and wears glasses. And, his blonde hair is tinted emerald green. He is courteous, well-mannered and straightforward. He explains that he started baking when he was 8-years-old. Why, I ask?

A love of cookies seems to have inspired a budding entrepreneur. At the age of 11, Casey was already baking for his family and since he liked to cook, he stopped by a local restaurant – The Lusty Lobster – to ask the chef for some culinary advice. He’d bring the restaurant staff his homemade cookies as a thank-you gift for the guidance they gave him. The owner suggested that Casey should try and sell his cookies, and let him place a basket of cookies in the restaurant foyer with a money jar, so that patrons could purchase the cookies. The cookies proved so popular that soon Casey had set up baskets and jars at several other eateries in town. Today, he bakes between five- to six-hundred cookies a week to meet the demand for his product.

He is a self-taught baker. His signature recipes were achieved with some tinkering and experimentation. Chocolate Chip is Casey’s best-selling cookie and his personal favorite. I ask what his friends think of Casey’s culinary enterprise.

“They think I’m crazy,” he replies casually. “They say, Hey Casey, let’s go play basketball, but I’m like, no I have to go bake cookies.”

He charges fifty cents per cookie and says he has donated nearly two-thousand dollars of his profits to Heifer International. Since 1944, Heifer has helped 10.5 million families in more than 125 countries move toward greater self-reliance through the gift of livestock and training in environmentally sound agriculture. Casey chose Heifer International for his philanthropic efforts because it is the preferred charity of his favorite celebrity, Alton Brown of the Food Network.

The oldest of four brothers, Casey spends two hours baking every day, and all day on Friday during the summer. For the annual Highlands Clamfest in early August, he baked nearly two-thousand cookies.

I ask him why he thinks the customers keep coming back for more. He shrugs. “Because they like cookies?” he suggests, and then pauses and adds drolly, “Maybe it’s my green hair?” 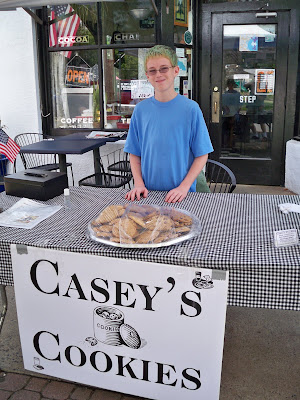 He clearly seems to enjoy the social aspect of his work. “Doing this, I get to meet a lot of new people.”

He is well-equipped to keep the business functioning smoothly. “I’ve got a really big mixer and it’s really cool,” he tells me. “It’s a heavy duty one and I got it for Christmas, and it has flame decals on it.”

Casey freely offers advice for home bakers who are interesting in making cookies: “Make them from scratch, and don’t use mix. And, use actual flour and not corn syrup. And, actually use sugar and good ingredients.”

Ken Harber is the owner of The Baking Company and the Water Witch Coffee & Tea Company in Highlands. He has been a friend, mentor and role model to Casey. Says Casey of Ken, “He’s so cool and he has so much advice he can give me.”

“The baking is just a symptom of a great person under construction,” Ken tells me when I ask him to describe Casey.

Harber is impressed by the teen’s business skills. “His math is very good. He knows how to figure how much he can make in his allotted time, and his ingredients and all that. He’s learned a lot.”

Harber was more than willing to make a place for Casey’s Cookies in his store. “I told him it’s good for the neighborhood and it’s good for you.”

“He’s just as nice as could be and I would do anything for him,” says Harber. “If one other kid around here sees this kid making something out of himself, then it’s worth it.” 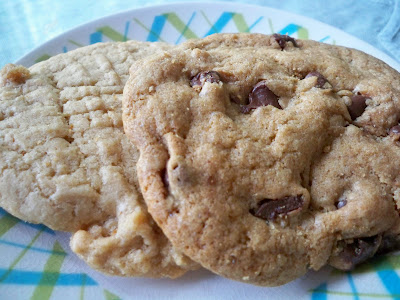 Meanwhile, Casey has heard talk that he is a local celebrity, and gives me a slight smile when I bring it up.

“Everyone keeps telling me that, but I’m trying to stay modest.”

Casey’s Cookies accepts special orders. Please give at least 24 hours notice for orders of 12-100 cookies. For orders of 100+ cookies, please give one week’s notice. Delivery is available within Highlands for a $2.00 delivery charge.

Casey, you are an inspiration! I do hope you have your own bakery one day very soon.

What a fabulous story! I love the entrepreneurial spirit and how the community is rallying around Casey to help him grow and succeed!

This is just too much fun! What a great kid; his parents must be so proud.

I am truly impressed. What a great start to a successful life.

Thank you so much for publishing this story about Casey. He truly is a local hero and sets a good, hardworking example in our country not just young people but adults as well.

Hooray for you, Casey! Highlands is lucky to be your home town. I'm sure we'll be reading more about you as your business grows.

Such motivation and spirit is to be commended. I'm sure we will be hearing more about/from this young man in the future.

Oh, what I'd give to fly across the ocean and see Casey in person, to congratulate him on his generous heart and entrepreneurial spirit. And taste those cookies!

Oh my, what an inspiration you are Casey! You are going places, kid. T.W., thanks for bringing this story to us.

What a cool kid. This is absolutely inspiring...and the cookies look delicious too! I love his straightforward answer about "why cookies?". :-)

I love Casey's Cookies!!! I buy them every week - he's got a talent for baked goods!

Thanks so much for introducing us to Casey. It's fabulous to see young people with ambition, especially food ambitions. Very heartwarming.
Sam

Oops, I'm using a different computer, not sure if I just commented.

Thanks for all your nice words and encouragement for Casey. I wish I lived closer - I'd be buying his cookies every day.