Advice from the Kitchen GadgetGal There’s at least one, lurking in a dark corner or recess of every kitchen – a slightly embarrassing reminder of the home cook’s irrepressible desire for miracle solutions, or proclivity for impulse-buying. They are the disappointing, the underperforming, or just-plain-dumb kitchen gadgets and appliances. We all buy them, and eventually we all toss them, or quietly donate them to junk sales. Yet, we all have those tools we can’t live without. So how do you tell a culinary workhorse from a complete dud?

In the back room at the store, “A Cook's Companion” in Brooklyn Heights, New York Jan Hazard is giving the merchandise the once-over. The store is a veritable utopia of kitchen equipment and accessories. The floor-to-ceiling shelves are stocked with coffee pots and Dutch ovens in as many hues as a Crayola Crayon box and scads of silicon tools hang like alluring holiday ornaments along every inch of wall space.

Jan Hazard has a sunny demeanor, bright eyes, a warm smile and short-cropped sandy hair. Her reading glasses are perched high atop her head, and she carries a scratch pad. A long-time food editor at Ladies Home Journal, she now dubs herself the Kitchen GadgetGal. With her partner Nancy Byal, a former food editor at Better Homes and Gardens, they dispense advice on a gaggle of gadgets and small appliances at http://www.kitchengadgetgals.com/.

Jan has agreed to give me a 101-course on the ingenious, cluttered and often cacophonous world of culinary tools and appliances. She leads me down the store aisle on the hunt, with the kind of instinct and intent one usually only sees at the Barney’s mid-winter sale. She mixes experience and pragmatism with a genuine sense of excitement for a new discovery. And, for those kitchen clinkers, she offers a healthy dose of skepticism, and a “what-were-they-thinking?” bemused sense of humor. "Coffee pots have always sold,” she tells me, inspecting a mile-high display. “Whether it’s electric or the French press or the drip, we like our Starbucks and want to get that taste at home.” So, no matter what your culinary skill, coffee is one thing we’ve all managed to master in the home kitchen.
But, if one were equipping a kitchen from scratch, what are the essential tools one should gather? “I would have a basic gadget drawer with about ten things in it,” says Hazard. “A silicon spatula, a pancake turner, a can opener, and a whisk. And, knives – you only need three knives really -- a chef, a pairing and a bread knife. I would also get tongs, and a pair of scissors to cut open all of these sealed packages that we have to deal with." She points to a collection of instant-read thermometers. With concerns about food safety, their use is increasing. “That’s in the gadget drawer. That’s one of the ten gadgets you need to have.” Hazard says the instant-read is particularly handy when checking items cooking on the barbecue.

Hazard believes it’s essential to test the weight and feel of any tool in your hand. “Every hand size is different.”
How does she evaluate the longevity or relatively short trendiness of a kitchen tool? “I think it should be multi-use. There are some things that are not multi-use. You have to consider how valuable it is to you. If you want fresh lemon juice every day, then buy the lemon juicer. It’s what you deem important.”
Hazard is an advocate of silicon utensils, although she’s not a fan of silicon baking pans - too flimsy. She points to a short plastic tube hanging on the wall. “The thing that I think is absolutely useless? The garlic peeler! I mean, what’s wrong with taking a French knife, putting it down and smashing it?”
Is she a chronic collector of kitchen gadgets? “I get a lot, just because of our business. My kitchen is organized chaos, definitely. I’m like the cobbler’s kids – barefoot and no shoes. I have the worst kitchen ever. If anyone deserves a great, gorgeous kitchen, I’m a candidate, but I don’t have it.”
If you are an obsessive gadget collector, one method is to count to ten before purchasing. “Think of its uses,” says Hazard. “Go to garage sales just to see what people are selling, because that gives you a window into what’s not working." She agrees that the constant innovation in kitchen technology causes the need to step back and purge on occasion.
The GadgetGals website came about due to the changing editorial climate. “Originally, when we started out, we wanted to have a syndicated newspaper column,” Hazard explains, “but we know what’s happening to newspapers, so we said let’s try the web instead.”
Kitchen tools and appliances often carry a personal connection. “I’ve seen people that have something of their grandmother’s or great grandmother’s. It’s something they’d like to hang on to because it’s part of the continuation of life. It’s something from the past.” She describes arguing with siblings for possession of the family box grater because it was so effective, but then the Microplane came along.

Given the state of the economy, what items might become popular as more people turn to home cooking? “I went to an eco house wares show,” says Hazard, “and they were showing a deep fat fryer that only uses one tablespoon of oil. The machine is 300 dollars, so you really have to love French Fries, but it’s kind of a better mousetrap that uses far less oil. Remember deep fried-turkey? What people failed to realize is you needed six gallons of oil. And what do you do with it after you fry the turkey?”

Time savings and convenience and important features, and Hazard acknowledges that she is a more recent convert to some devices. “I must say that I came to slow cookers kicking and screaming. I’m in love with them now. You can make chicken broth with them. I’ve talked to people who will roast a chicken and throw the bones in afterward in the slow cooker. You just put it on low and let it cook all night and get a wonderful homemade broth. So, I think things like that are going to find other uses, other than chili and split pea soup.”

We pause by a shiny, chrome pressure cooker. “Do you have one?” she asks. “Are you fearful?” I share my recollection that my mom’s pressure cooker would sometimes explode.

“Everyone has that same memory,” she agrees. “I’m with you on that. But now, they really are very safe. I’ve even used mine to make a risotto.”

So what’s the worst kitchen gadget of all time – the culinary equivalent of the Edsel? Hazard mulls over several notorious candidates. Then she gives a definitive nod. “The hot dog cooker and the electric crepe maker!”

At that point, my cheeks color. “We had an electric crepe maker,” I reply sheepishly.

“I did, too,” Hazard admits. “But, it only cooked one side. You have to cook both sides of your crepes!”

How many kitchen gadgets has Hazard tested during the course of her long career? “I'd lie if I said it was the same number as the bailout package from Congress,” she laughs. “But, I'd be telling the truth if I said I have not kept track and could not begin to count. I must have stopped counting after the hot dog cooker!” Back home, I admire my purchases from “A Cooks Companion” – all multi-use as the Kitchen GagetGal recommends. The 2-in-1 Citrus Squeezer will juice both lemons and limes. The wide-angle silicon spatula – heat resistant up to 600 degrees – will flip hamburgers, pancakes, lift a pizza, and probably come in handy if I want to fry an egg on the exterior of the Space Shuttle Discovery. And, the retro New York City tea-towel is good for drying hands, face and dishes. I am confident that all will give me years of use as I tuck them away in a cluttered kitchen drawer. 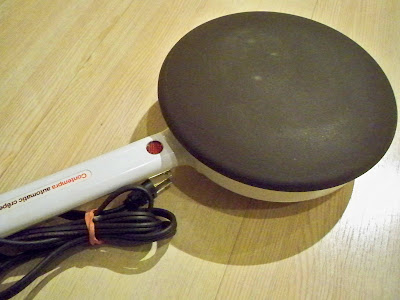 Later, it doesn’t take me long to locate the much-maligned electric crepe pan hidden away in my basement – a worn relic of the haute-cuisine, high-tech 1970s. I consider one final farewell crepe party, but decide that perhaps it’s time for a little spring cleaning instead. And, maybe even a garage sale.
©2009 T.W. Barritt All Rights Reserved
Posted by T.W. Barritt at Culinary Types at 12:05 AM

All great advice! My favorite gadget is my fish spatula. I love it so much I bought a second for when the first is in the dishwasher. It's flexible to use with a types of cooking - I can use it to flip pancakes, fish, stir or whisk. Though not in my teflon pan.

My kitchen is so small that I purged myself of unnecessary gadgets a long time ago... but I still have a rolling pin with upward turned handles that was a gift from a dear from that I can't seem to throw away.

Thanks for the heads-up on the Gadget Gals, T.W. What a great visit I had. There are some cool articles tucked inside those "shelves." I especially like the one about Key Lime Pie.

Thanks for sharing...time to clean the junk draw!

Yes, I've purged some of my kitchen gadgets over the years. I've always wanted to get a pressure cooker but I'm afraid to use it.

I too have purged most of my single-purpose kitchen gadgets ages ago. But I've managed to fill the space in my kitchen with doubles of things I use often, like Microplanes, and multiple sets of measuring cups.

Tongs are a favorite in our kitchen. I have at least four. I insist on good ones, not the flimsy ones that won't stay shut.
When my husband is unloading the dishwasher (yes, he's wonderful to do it) and there are three sets of tongs in there, he'll say, "Looks like we had a three tong day."
Sam

Great advice from Jan, the GadgetGal! I especially liked the idea of making chicken broth in the slow cooker. I got rid of my slow cooker a long time ago, but maybe it's time to get another one.

I love spending time in those stores. I have lot's of kitchen gadgets.

Oh, what an interesting interview~I would have loved being there to listen to all that helpful info!! Lucky you! Hey, I had one of those crepe devices ~ used it twice and out it went!!

Julia - I have to report that the lemon/lime squeezer works beautifully.

Louise - I think the purging is an endless process.

Veron - I'm the same on the pressure cooker. It might be time to give it a shot.

Lydia - I can't part with my Microplanes.

Sam - A three-tong day must be a good one in your house!

Sandy - I have to give the broth a try, too. Can you imagine waking up to that?

Helene - do you have a favorite?

Jann - we got a bit more use out of ours, but for some reason I can't seem to part with it.

Fear not! Pressure cookers have become so techno-advanced. They don't explode! I have owned a traditional stovetop pressure cooker, and now I own a digital pressure cooker. I love, LOVE, LOVE my P/C. It is my slow cooker that sits, neglected with cobwebs. I am not trying to self-promote my blog (I come here, becomes I'm addicted to CT's writing style and recipes... but I have blogged about making soups and cooking beans in less than an hour.

I love gadgets, but I use every single one of them-- or out they go (teeny kitchen).

Terrific and useful article, T.W. I find myself blushing with guilt while reading about the single-use gadgets of years gone by. The shame!