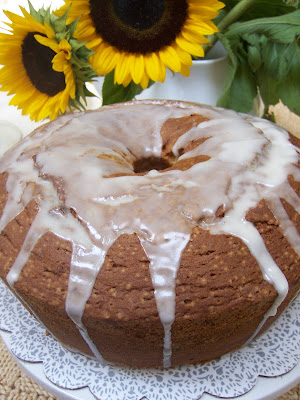 The package that arrives in the mail from Phil T. contains several aging recipe pamphlets. The colors are fading, but the booklets are in mint condition.

The attached handwritten note says: “I came across the enclosed two booklets I want you to have. They both reminded me of your cake stories.”

I knew it would happen eventually. Several months and eight dozen pounds of butter and flour later, and I’ve become the patron saint of Retro Cakes. I couldn’t be more thrilled.

For someone like me, who is fascinated by food history, the package from Phil is a gold mine. I open the first slender pamphlet – “46 Great Drinks from New York and Restaurants at the World’s Fair.” Well, it’s not exactly about cakes, but it will sure come in handy after a tough day at the office. There are neat illustrations of women in Capri pants and men in cardigan sweaters drinking Old Fashioned Cocktails in cedar-paneled “rumpus rooms.” Phil is wise. He knows that man cannot live by cake alone. 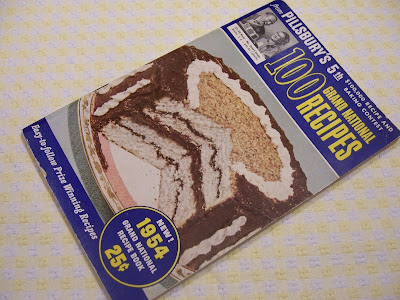 The second booklet gives me plenty of cake options. The yellow printing on the cover stands out against a royal blue background – “From Pilsbury’s 5th $100,000 Recipe and Baking Contest: 100 Grand National Recipes.” The cost of the booklet is 25 cents.

In 1949, Pillsbury Mills, Inc. held the "Grand National Recipe and Baking Contest" to mark the company's 80th birthday. The response was overwhelming, and the Pillsbury Bake-Off Contest became an annual event, later switching to every two years. Scores of culinary hopefuls still compete today at individual baking stations for fame and recognition. Today the prize is $1 million. Cakes rise and so does inflation. 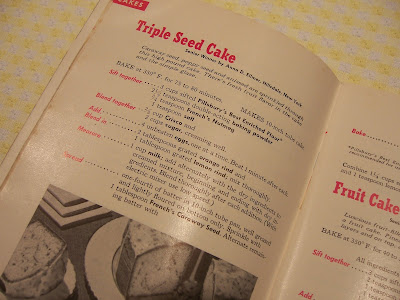 Mrs. Ralph E. Smafield of Detroit, Michigan won the top prize in the first competition in 1949 with a yeast bread recipe for “Water-Rising Nut Twists.” Mrs. Smafield walked off with a wad of cash, but her first name doesn’t even appear in the photo gallery of winners – only her winning smile and her husband’s full name. Shame on you, Betty Crocker.

The booklet in my hands contains the prize winning recipes from 1954, the fifth annual baking contest, which was actually dubbed the “Bake-Off” by the news media. The competition was held at the Waldorf Astoria in New York City, and featured celebrities like Art Linkletter and Arthur Godfrey. The recipe book contains 100 recipes for Cakes, Cookies, Breads and Main Dishes. There’s even an official entry blank for the upcoming 6th Grand National Recipe and Baking Contest. 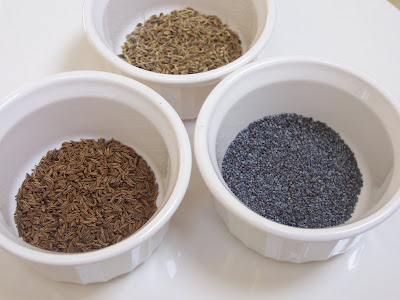 I flip through the book and a recipe on page 22 catches my eye – Triple Seed Cake, submitted by Senior Winner Anna D. Ellmer of Hillsdale, New York. It’s not clear how much money Anna won, and she appears to be a runner-up in the cake category. The “senior” category appears to refer to any contestant over 20 years of age. The introduction says, “Caraway seed, poppy seed and aniseed are sprinkled through this high pound cake. There’s fresh fruit flavor in the cake and the simple glaze.” It contains no other information about Anna. 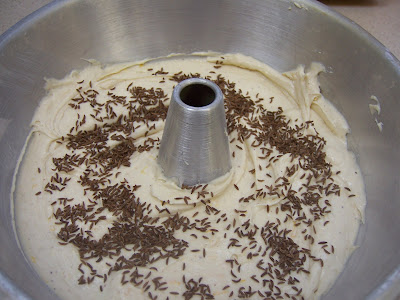 I’m intrigued. The Oxford Companion to Food describes Seed Cake containing caraway seeds as “an old-fashioned curiosity, and rarely made” but was once quite popular in Great Britain. It even suggests that historically seed cake was served at the annual spring planting festival, although connection to seeds was purely symbolic and currant or plum cake was served at the celebration. 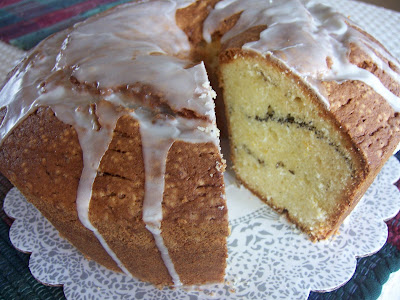 The recipe for Triple Seed Cake alternates layers of citrus-scented batter with aromatic seeds. Anna D. Ellmer clearly believed that if one type of seed was tasty, three would be even better. Anna also believed in efficiency, as Triple Seed Cake is relatively easy to assemble, although I’ve got a KitchenAid mixer and it is doubtful she had one in 1954. The recipe is as follows:

Add 4 unbeaten eggs, one at a time. Beat 1 minute after each.

Measure 1 cup milk; add alternately with the dry ingredients to creamed mixture, beginning and ending with dry ingredients. Blend thoroughly after each addition. (With electric mixer use low speed.)

Bake in moderate oven (350 degrees F) 75 to 80 minutes. Let cool in pan 15 minutes before turning out. Frost while slightly warm.

I’ve been careful to select Pillsbury’s Best Enriched Flour and the tag line on the package confirms it is still the flour of choice for the Bake-Off. The batter whips into soft mounds. I layer the seeds into the batter, and place the tube pan in the oven. I imagine Anna Ellmer’s kitchen in Hillsdale, New York filled with the exotic aromas of citrus and fragrant seeds baking. I inhale the essence of the ingredients melding together – the sparkle of citrus zest, the tang of caraway seeds, the licorice scent of anise seed and the nutty, peppery zing of poppy seeds. It smells like Christmas in a tropical paradise. I slice the cake with Mom and Dad and we share it over a cup of Constant Comment Tea, quite appropriate for a cake from 1954. The cake slices beautifully and waves of seeds are visible on each wedge.

Three cheers to Anna Ellmer and her Triple Seed Cake from 1954. While she wasn’t the grand prize winner, she kept her identity intact and she left us with a delicious legacy of a creative twist on an historic cake.

Funny, I found this very same Pillsbury recipe book from 1954 at a yard sale a year or so ago. Unlike you, I've never tried any of the recipes. Now I'm going to try and remember where I've stashed this, to give it another look.

My grandmother used to make bisuits with these seeds but never cake. I'm sure she would have loved this one.

If anyone deserves the title of "Patron Saint of Retro Cakes," it's you T.W. Well earned, indeed.:)

ha ha...patron saint of retro cakes...that's too funny T.W. but it looks like an delicious cake so perfect with tea!

Lydia - you should try a few of the recipes. They are indeed classics! I have my eye on "Prune Whip Spice Cake" next!

Susan - Bless you, my friend!

Valentina - thanks! It has a wonderful, subtle flavor.

Hello T.W - Or, should I say, Hello Patron Saint of Retro Cakes. When you publish the definitive Retro Cake Cookbook,I will have my hand up for a signed copy!

I love your cake adventures! And I'm sure we'll be seeing more from that book...

Hi Janet - I thought you might like the Seed Cake, as it has it's traditions in Old England!

Diane - I have heard a lot about the Schlesinger Library and would love to visit it someday. About a year ago I was able to speak with the woman who originally put the collection together.

Brilynn - Glad you're enjoying the adventures - more to come!

I hope to see a lot of recipes from that cookbook.
A dollop of cool whip would be yummy with your retro cake~ oh wait... there was no cool whip then.

I love finding treasures like that book. That cake looks tasty.

Hi Sandi and Peabody - I have 99 more recipes to go. What would you choose next? Magic Fudge Cake, Maple Syrup Layer Cake, or Caramel Pear Upside-Down Cake? With, or without Cool Whip?

What a beautiful cake, T.W.
The idea of making layers of seeds rather than mixing them throughout the batter is new to me and definitely one I want to try. As always I enjoyed reading your post: your description of the vintage recipe booklets is great!

My mother bought all of those Bake Off books and tried many of the recipes. After she made the Triple Seed Cake, that became my birthday cake of choice. Every year, from 1954 until 1996, she baked that cake for me. When she passed away, I went through her recipe cards, but couldn't find the recipe. I never thought to look through the Bake Off books. Thank you!

By the way, those Water-rising Twists are really good too.

My mother used to make this cake every so often, she recently lost the recipe, and I've been going crazy trying to find it. Now we have it again! Great cake, thanks for sharing!