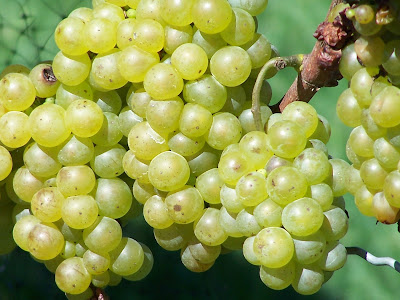 It is one of those iridescent blue-sky September mornings. The clouds dance across the horizon like soft white cowlicks.

I head east in my faithful cobalt-blue 1999 Toyota Corolla and soon I am on the North Fork in Long Island wine country. It has been for years, an annual pilgrimage. Finally past the outlet mall, the Riverhead Home Depot and the brand-spanking-new Target, I am now surrounded by farmland. When I was young, the fields produced potatoes and nurtured Long Island ducklings. Then, in 1973, a woman named Louisa Hargrave and her husband purchased a 300 year-old potato farm and planted ten thousand grapevines. Hargrave Vineyard was the first vineyard on the North Fork. Today, there are more than 60 vineyards and 38 wineries.

We natives learned early-on that the land mass called Long Island resembles a fish with two tail fins. The North Fork is long and narrow and points slightly northeast into the Atlantic Ocean. Surrounded by water, that makes the North Fork growing climate ideal for wine grapes. The warm maritime temperatures and lengthy summer season allows the grapes the maximum amount of time to mature and develop on the vine. More than 3,000 acres are now planted and lined with grape varietals like cabernet franc, chardonnay, merlot, syrah and viognier. Three appellations have been designated in the region – North Fork of Long Island, The Hamptons, Long Island, and Long Island. 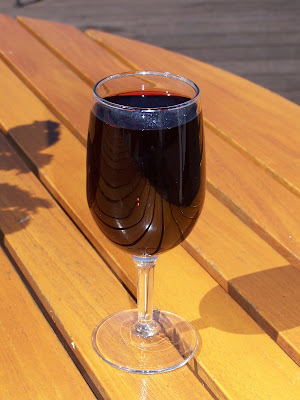 We are just shy of autumn, but pumpkins and green and yellow zucchini abound at the farm stands, and fat green and black grapes make grapevines sag from their weight.

At Laurel Lake Vineyards, one of the oldest vineyards on the North Fork, I sample a bold 2003 Syrah full of pepper and black currant and a soft playful Riesling in a sublime blue bottle.

Pindar was founded in 1979, it is the largest vineyard on Long Island, and it attracts hordes of weekend visitors. There are now two or three huge tasting bars, and stretch limos crowd the parking lot.

The world is more leisurely at Bedell Cellars where the tasting room is located in a renovated potato barn built in 1919. Outside, an expansive porch looks out on the vineyards. A jazz ensemble plays bass and keyboard. I purchase a glass of Cabernet Franc that is rich with notes of blackberry, flint and leather. I take a seat and gaze out on the rolling green vineyards, as far as the eye can see. I feel like a lazy feline in the afternoon sun. Later, there will be salad made from fresh local farm stand corn, and ginger molasses cookies, but for now, it is a wine moment. And it is delicious. 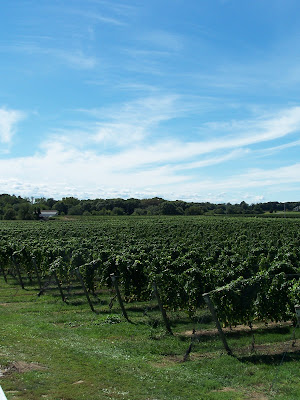 Click below to experience more of the North Fork of Long Island, bursting with late-summer bounty.

A beautiful harvest and Lord of the Dance -- what a lovely way to start a Monday morning. Thanks for showing us your "home town".

Wow! What a wonderful way to enjoy the waning summer days. It is prime time for wine harvest, lucky you!

Hi Lydia - it is a very special destination. It's a wonderful place to "escape" for a little time on weekends.

Veron - I love seeing the grapes on the vine, and it's a nice place to picnic as well!