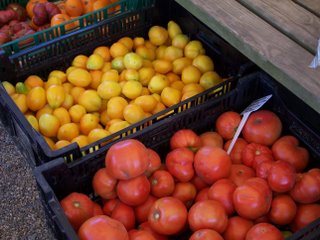 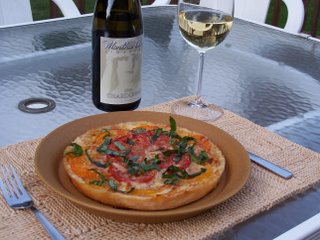 Locally Grown: It is a stunning summer Saturday in August. The temperature is barely 75 degrees, a gentle breeze is blowing, and there are just a few hints of wispy clouds in the big blue sky. The dog days are gone, and what’s left is deliciously sun-drenched and intoxicating.

I decide to play hooky from a number of obligations and jump in the car, headed for the North Fork of Long Island. No doubt summer, produce and grape vines are exploding on the East End.

I encounter little traffic and I’m soon sailing along Sound Avenue, a winding country road dotted with third and fourth generation farm stands and slightly newer wineries. My first stop is the Martha Clara Vineyards in Riverhead which is actually owned by the Entenmann family of crumb cake lore (http://www.marthaclaravineyards.com/). The legend goes that Martha Clara was an Entenmann's employee who dreamed up the plastic window on the cake box, and married the boss. She was rewarded with marital bliss, sticky buns for breakfast for the rest of her life, and they named the vineyard after her. I cozy up to the tasting bar and sample four lovely vintages – a 2004 Riesling, a 2004 Chardonnay, a 2002 Merlot and a 2002 Cabernet Franc. The Chardonnay is smooth and spicy and I pick up a bottle before leaving the gift shop.

Further east in Peconic, I pull into Sang Lee Farms. Mr. Lee is a purveyor of heirloom tomatoes and there are baskets to choose from. I marvel at tomatoes the color of buttercups, plums, moss and tangerines and purchase several pounds worth.

Parking proves challenging in the harbor resort of Greenport, so I return west on Route 25 where I discover “Barb’s Veggies,” a ramshackle farm stand on the edge of the Osprey Dominion Vineyard. According to the placard, Barb’s motto is “Git R’ Done,” and she looks like she’s weathered a number of tough seasons but her fresh peaches fill the warm air with sweet perfume. I pick up six plump ones and an ear of corn for another night.

At Bedell Cellars I relax on their impeccably spotless deck overlooking rows and rows of lush green grape vines. There, I sip a tart 2005 Rose the color of pink carnations and enjoy the cool breezes that caress the vineyard.

On the Main Road in Cutchoge, I stop at Cutchoge Green and take a tour of “The Old House” built in 1649, and said to be the oldest English-style frame house in New York State. It is on the National Historic Register. A friendly gentleman in a straw hat named Jim takes me on a tour. The kitchen has a massive open hearth and there are period cast iron kitchen tools in abundance. Jim also takes me across the green to an 1840 one-room school house that has a 13-star American flag from the Revolution, and the 1704 Wickham Farmhouse. The owners of these homes were the original settlers who farmed the land that has spawned my bounty of fruits and vegetables.

Back at home, I create a colorful savory tart from the tomatoes. The flavor of the tomatoes deepens and intensifies as they roast in the oven. Barb’s peaches are transformed into a silky, nectar-drenched oatmeal crisp. I dine on the deck enjoying the fruits of the season and watch the clouds turn coral and pearl gray against the sky, thinking that this is exactly what summer is all about.

Line a cookie sheet with parchment paper and place an 8 inch tart ring in the center. Drape the pastry crust over the tart ring, working it into the corners. Trim the edges.

Fill the pastry crust with the grated cheese (reserve ¼ for topping) and crush the clove of garlic over the cheese. Season with coarse salt and freshly ground pepper.

Slice the tomatoes about ¼ inch thick and layer them over the cheese in a circular pattern. Sprinkle with salt and pepper and drizzle with olive oil.

Bake in a 425 degree oven for 20 minutes. Reduce temperature to 400 degree and sprinkle with remaining cheese. Bake for an additional 20 minutes or until cheese is melted and golden brown.

Butter a 1 and ½ cup oven proof casserole. Peel and slice the peaches and place them in the casserole. Cut one tablespoon of butter into small pieces and combine with the peaches.

Combine the flour, oats and dark brown sugar and combine with the remaining butter, cut into small pieces. Sprinkle mixture on top of the peaches.

Bake at 350 degrees for 30 minutes. Let cool slightly before serving.