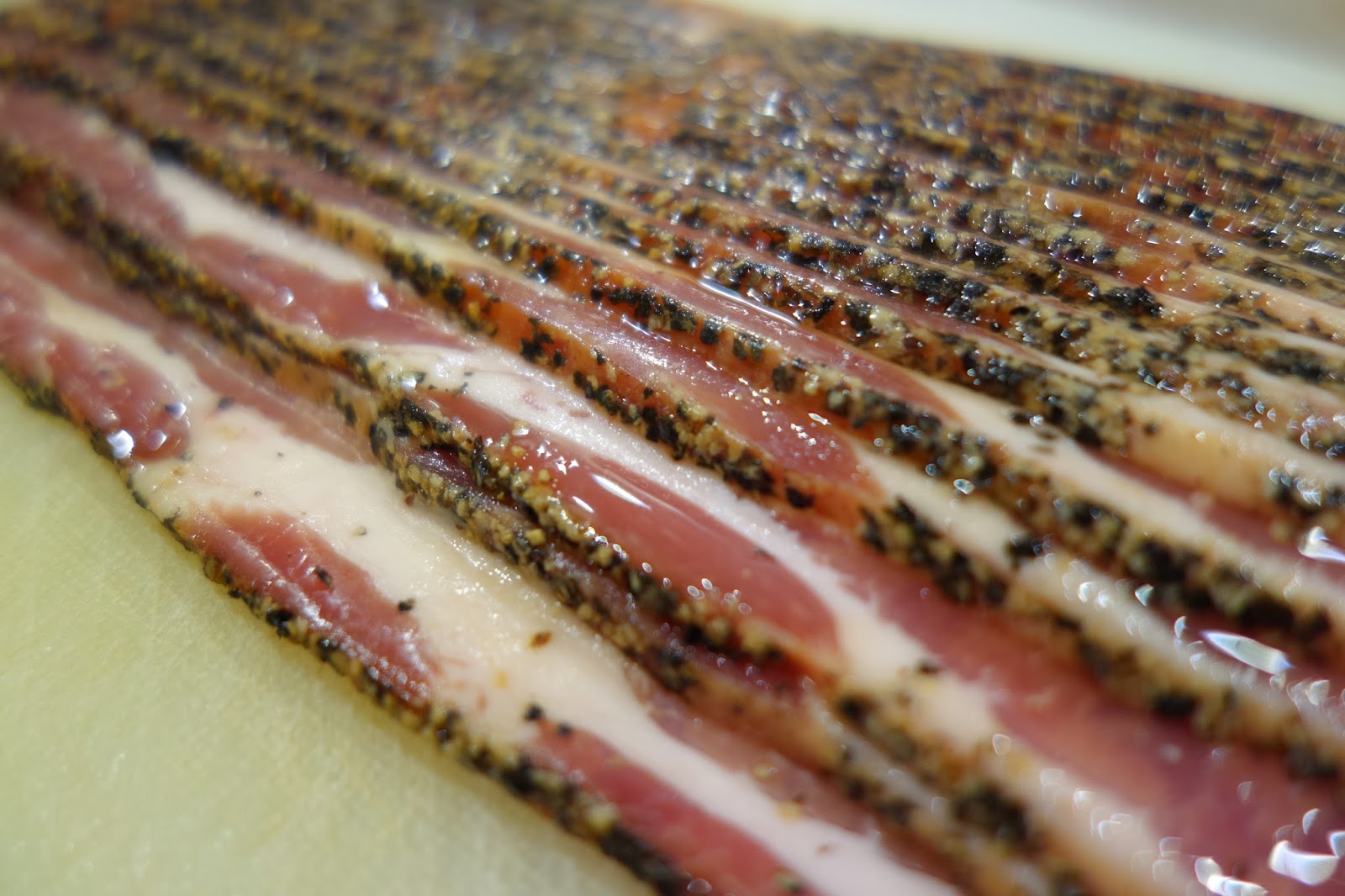 And, now we come to the grand finale of the Bacon of the Month Club adventure – Zany’s holiday gift that keeps on giving.  This was a three-month sampler membership, but the company knows just how addicting having bacon dropped on your doorstep each month can be. This final package includes a tempting love note that says, “It doesn’t have to end here …”

We’ll see.  I’ve never been good about long-term commitment, but could be convinced to re-up if it meant never worrying where my next slice of bacon came from. 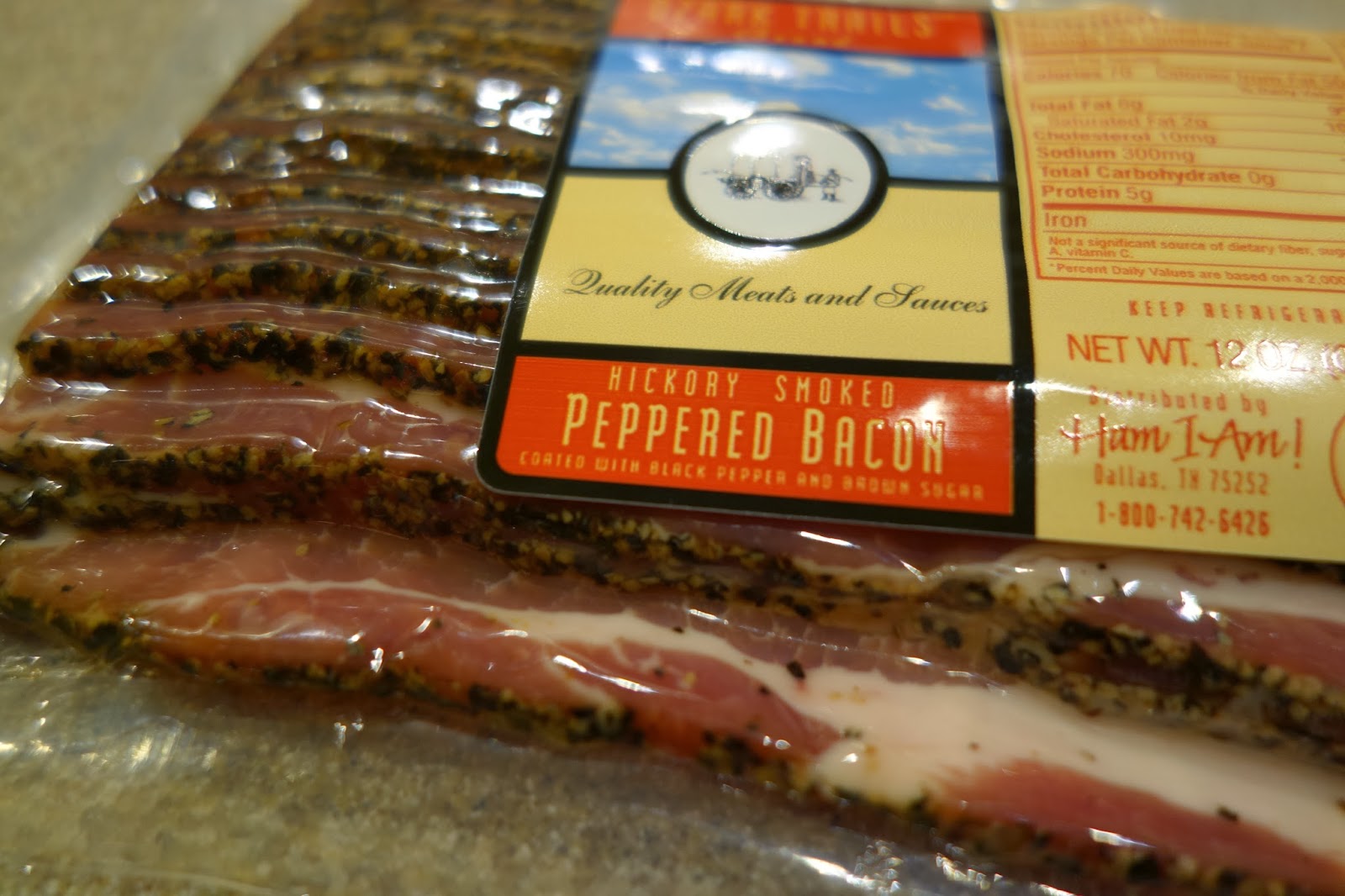 For now, I’m focused on my final delivery, a gorgeous hunk-of-ham called Arkansas Peppered Bacon. Yes, this hickory-smoked bacon from the foothills of the Ozarks is hand rubbed with cracked black pepper.  Look at that luscious, glistening fat! 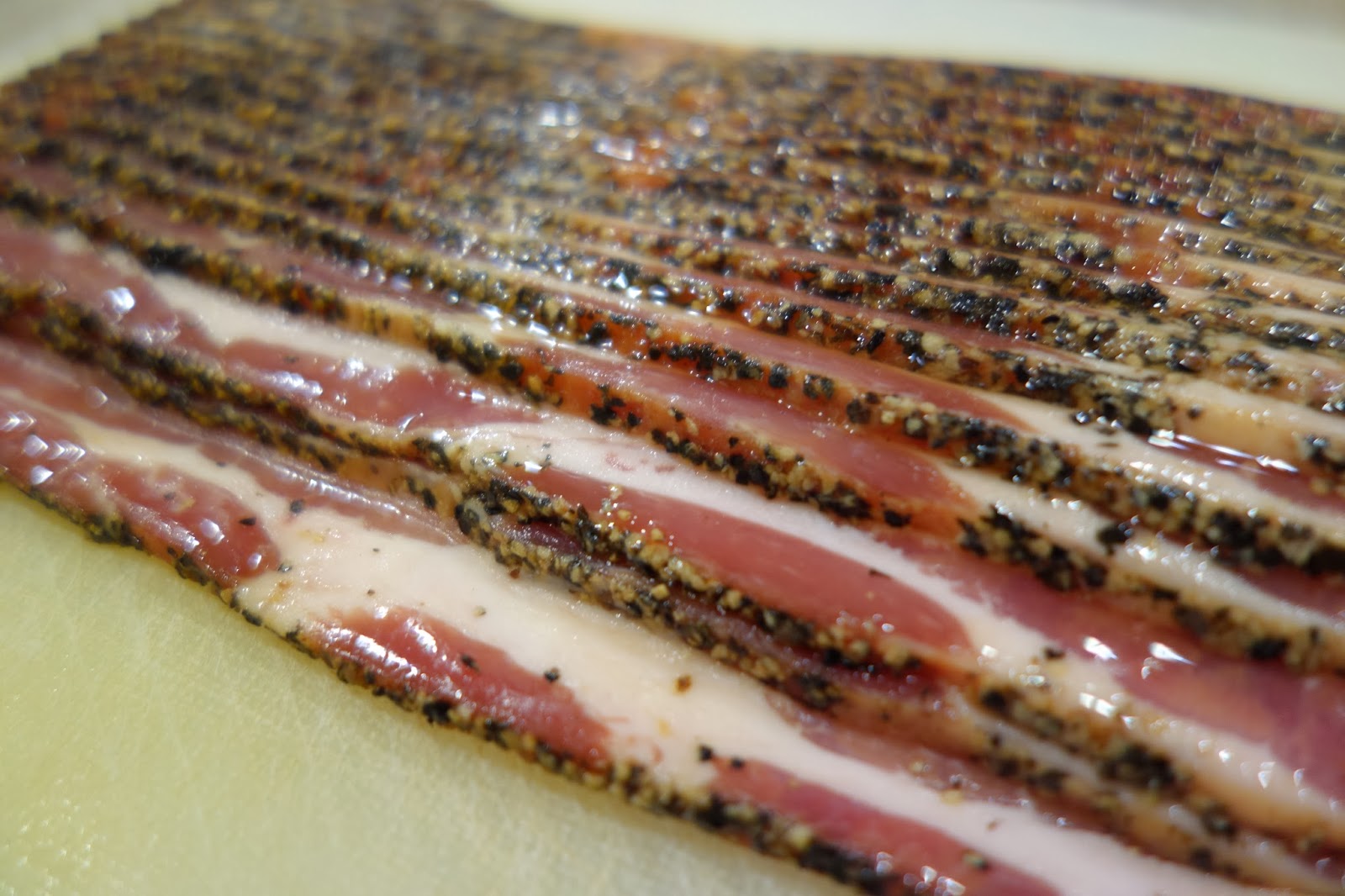 It is a truly a thing of beauty, and I take a deep, intoxicating whiff of the fumes of smoky fat and pungent pepper.  Besides being rather fond of bacon, I’m a bit of a pepper addict, so this is a match made in heaven – or the Ozarks, to be geographically correct. 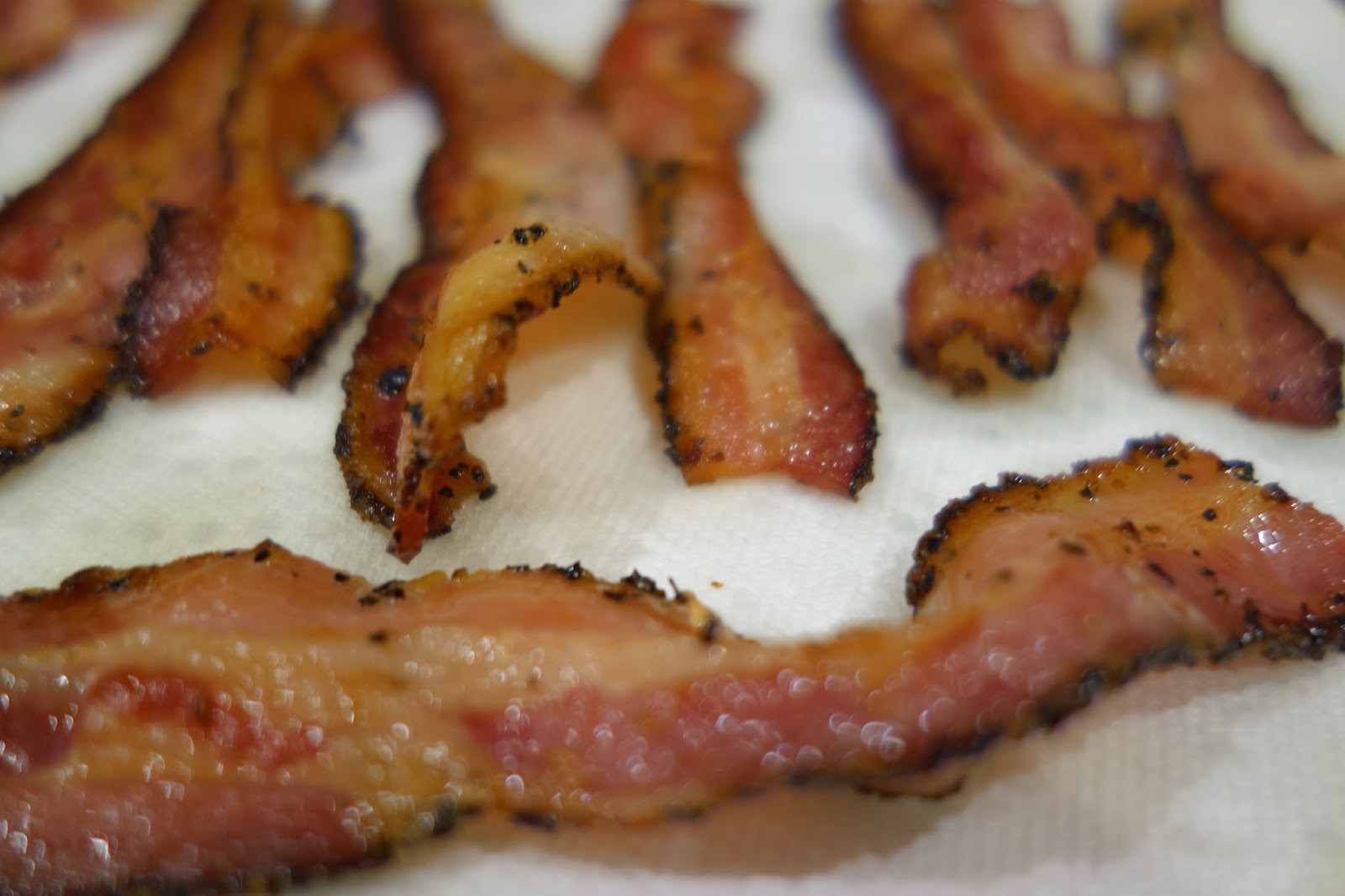 For my third and final baconfest, I turn to the recipe offered in the “manual” supplied by Zingerman’s Bacon Club – a savory Bacon Hash.   Because, if pepper bacon isn’t enough, why not just toss some potatoes, Worcestershire and heavy cream into the skillet?  Diet?  What diet? 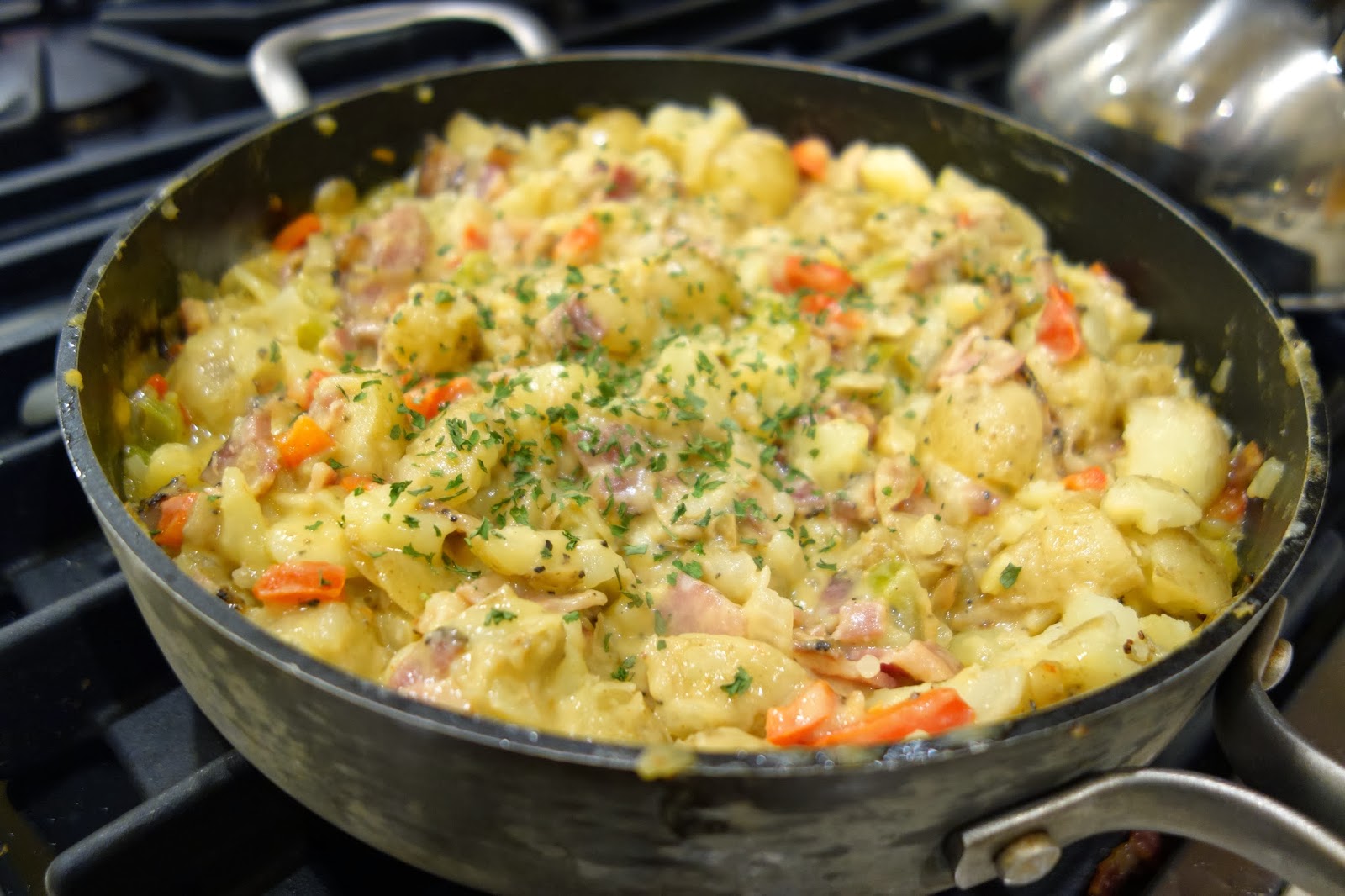 The full recipe can be found here.

It is a savory cacophony of carbs and fat.  I’m in hog heaven.  Zany, I can’t thank you enough!  You’ve probably ruined me forever when it comes to pedestrian bacon! 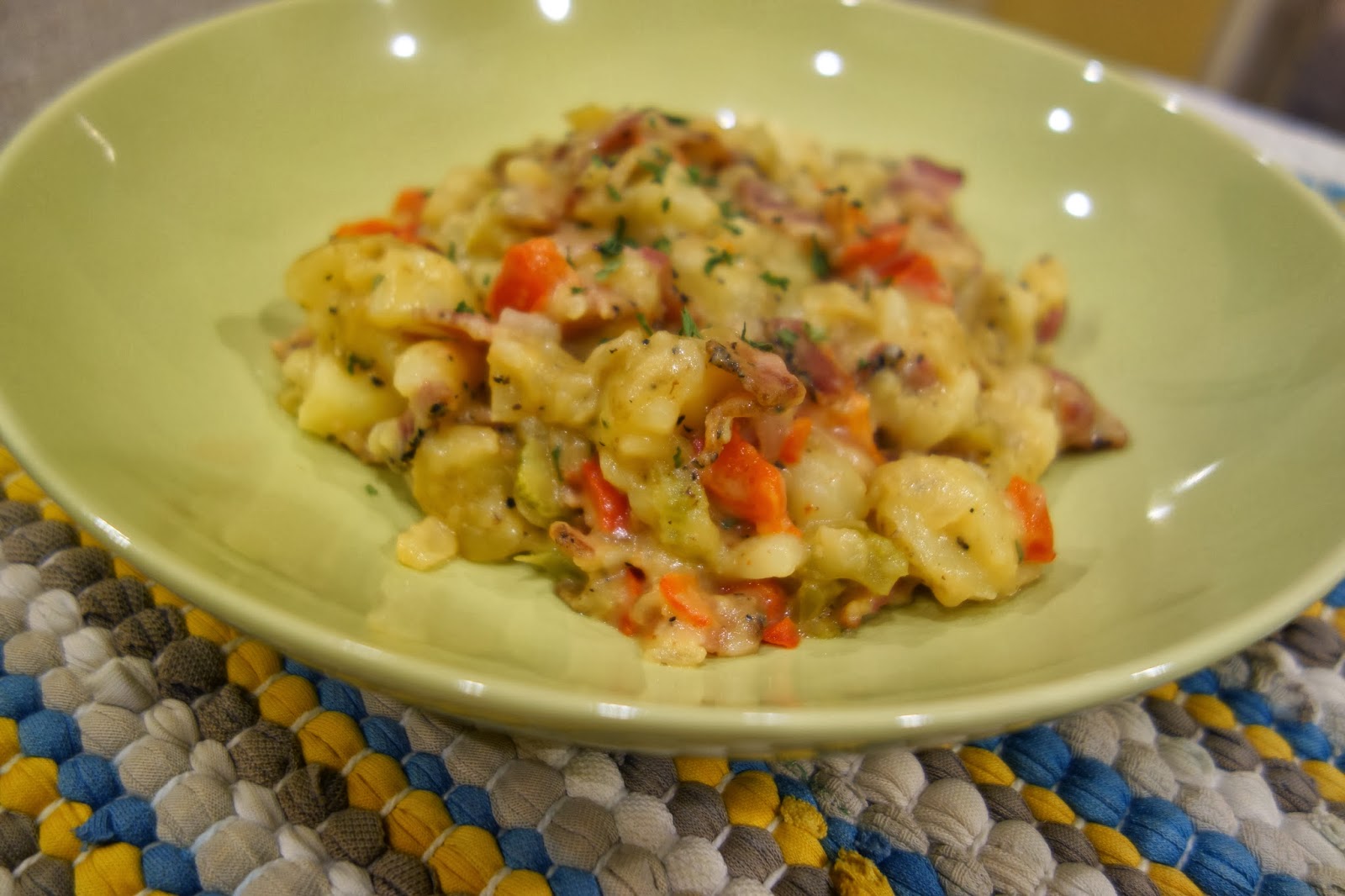 By the way, if you happen to have leftovers of bacon hash (which seems highly unlikely) and store it in the fridge overnight, eaten cold, it tastes like the best potato salad ever.

Was this cured b/c the Arkansas bacon I have seen here is not---just smoked. Love the looks of that hash. Diet beware!

That bacon looks awesome! I'd love some all by itself, but in your hash? Heaven. Naughty, but delicious. :)

I'm not familiar with that bacon, but that won't be long. I must check it out since it's from my neck of the woods. Pepper lovers must be in heaven. I bet you are sorry this affair with bacon is coming to an end...or will it continue :) Fun want to start my morning TW.
Sam

I love bacon too! I just got some duck bacon I am dying to try. I think the present was great, some may think it a silly idea but certainly not a bacon lover... there are so many ways to do it.

PS. Left you an email note about food trucks. Did you get it?

HAHA...I have a vision of you venturing to the fridge at about 3AM and eating the cold hash. Glad you enjoyed the gift - it made for great reading!

You sure did make the best of that bacon T.W. Not a silly gift by any stretch of the bacon imagination. I happen to be a bit of a pepper lover to so this bacon is just my style! Your choice for savoring the last of it is just perfect!

So are you taking the leap and committing another few months of fun and bacon?

Fats and carbs is one nature's finest combinations.

I hope you continue the bacon love affair! :)

What a wonderful gift. And can you please pass me a plate of that hash? Nice to find your blog.