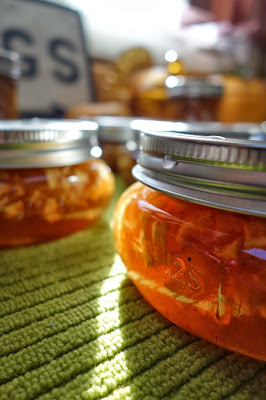 This is my absolute last jam session of 2013.  I mean it. I don’t have enough room on my pantry shelves for all the jam I’ve produced, and I haven’t even shared every recipe with you. You have no idea the extent of this obsession. Scary.

I keep telling myself, “They’ll make great gifts for the holidays.”

I must admit I’ve been enticed by the signs in the grocery stores for “New York State Apples.” Even the big supermarket chains have taken on the language of local food. So I pick up a “tote” of New York State Gala apples. 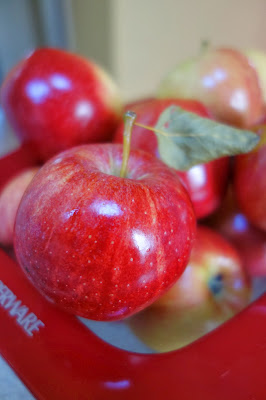 The New York State “Apple Country” website describes the Gala as a juicy variety developed in New Zealand, that is mild and sweet in flavor with crisp, creamy yellow flesh. New Zealand, huh?  So the “local” connection may be a little spurious after all, but it’s probably a good bet they were grown in New York soil. 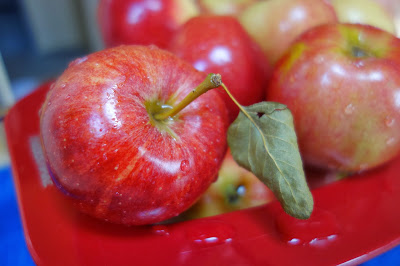 Many of my jam projects are predicated on what’s in the pantry – and I’ve been holding a bottle of Vermont Maple Syrup from Top Acres Farm in South Woodstock that I purchased last autumn during a visit to the Billings Farm Museum. 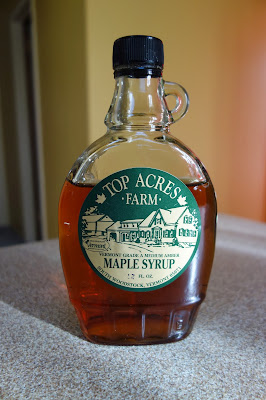 The Ball Blue Book Guide to Preserving completes the jam session with a recipe for Apple-Maple Jam.   It sounds like a nice way to preserve the flavors of autumn well into the cruel, cold winter.   And it’s a perfect mash up, or should we say, “jam up” of two neighboring states – the Empire State and the Green Mountain State. 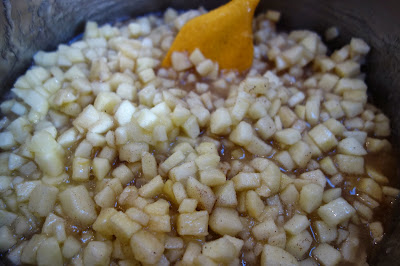 The biggest part of the job is chopping the apples, as the recipe requires 3 quarts of chopped fruit.

This is the second time I’ve tried a recipe that doesn’t call for adding pectin. You cook down the fruit until it releases its own pectin naturally. 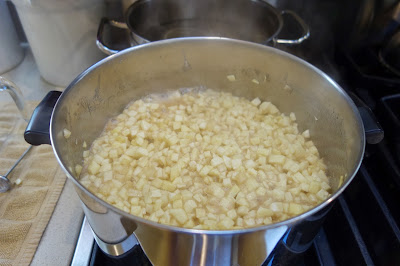 The mixture looks like a big apple stew.  It is rich with cinnamon, cloves, nutmeg and allspice.

I’m not sure I actually cook it long enough get to the jelling point.  Despite the use of a candy thermometer, I can’t quite seem to get the jam to the “soft ball” temperature.  I stand over the pot for what seems like an eternity, and start to feel a bit like a kitchen drudge. 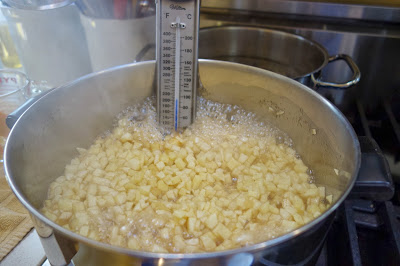 After boiling the jam within an inch of its life, I give up and decide to go ahead and process the jam. 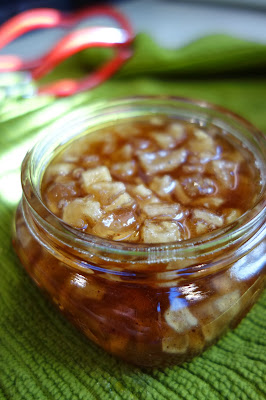 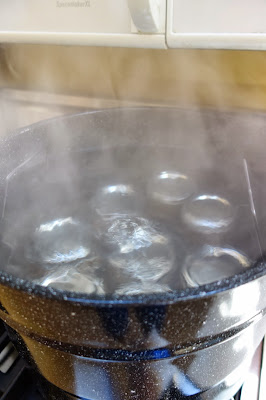 The kitchen smells like a Vermont Maple Syrup House on Thanksgiving Day, and the chunks of apples hang suspended like little jewels in the maple jam. 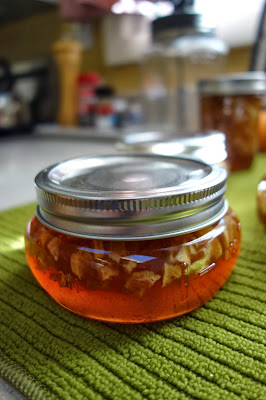 So what if it’s a little syrupy in the end?  I can always use it on top of pancakes or waffles. Better yet – how about atop a scoop of vanilla ice cream? That would be awesome. The key thing about jamming, is you just have to be flexible. 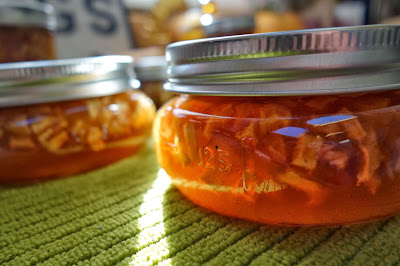 Here’s the recipe from the “Ball Blue Book Guide to Preserving,” in case you want to try your luck at reaching the “gelling point.”  Something about that phrase sounds vaguely scandalous.  As always, be sure to follow proper canning and food safety procedures.

Apple-Maple Jam  (Yield: about 8 half pints)

what lovely look your jam! I love the colour!
and I understand you love make jam.this year at the moment I only made strawberries jam but I hope mske others because we are in summer:)

What? No more jammin' in 2013! I'm just getting the hang of it:) I have been told putting up food can be a bit addictive but always wondered what's so bad about that. Now, I understand, Space. Where do keep all those golden jars of goodness?

I don't think I have ever had jam made with apples. I wonder if it matters on the type of apple you use for jam. Perhaps like pie apples versus eating apples. Well, it sure looks good to me and I love the touch of Maple Syrup. New York and Vermont should get together more often:)

Thank you so much for sharing, T.W.

Your jam is gorgeous TW. I wish I was one of your neighbors and you would drop a jar or two by. The apples we are getting down here in the south now are starting to look old.
Sam

Your jam looks terrific. I was just given a jar of jam that looks very similar. The apples wear picked in my orchard by a friend and were given to someone who makes jams that she sells…I'm looking forward to trying it. Now I'll have a recipe and can make it myself.

Dear T.W., Sounds like these would make wonderful presents. I am sure that this lovely jam would be very appreciated.
The jars are so nice too.

I think in olden times you put the seeds in cheesecloth when you cooked the apples... the pectin is there.
I love the idea of apples and maple syrup and so understand your canning problem. Like the sorcerer's apprentice, canning can get out of hand.... but look at what you have.

Here's wishing you a happy holiday and a great 2014!

Looks like a perfect apple jam. Just made a pumpkin cube jam, using a traditional lebanese technique (also done all over the med) of dunking the fruit in a water and quicklime solution..
Happy New Year!