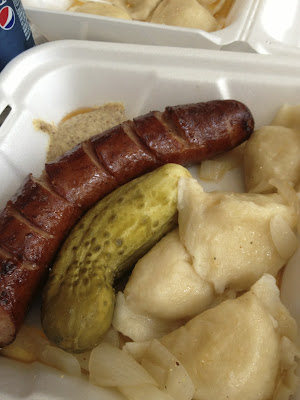 We haven't seen much of my college roommate Ford McKenzie this summer.  After hosting an extravagant gourmet dinner on Memorial Day weekend topped off with artisan S'mores at his summer getaway on the East End of Long Island, Ford headed abroad where he began voraciously eating his way through the great capitals of Europe.

The resulting food porn was excessive and just a tad annoying.  I'd stop for a quick lunch at Red Lobster (a healthy soy glazed salmon) and a series of pictures would suddenly appear on my phone from Ford, chronicling his tony four-course, five-star dinner in Geneva.   It was a not-so-subtle reminder that his food was infinitely better than mine.  That's the way it is with Ford.  He enjoys reminding me that anything I can do, he can do better.  A few days of this digital gluttony, and I find myself ungraciously hoping that Ford will split a seam in his skinny designer suit.

The summer is waning when we are both finally back in New York, and I decide that perhaps Ford's palette needs a little recalibrating.  We plan to meet up for lunch.

"An adult lunch, or road food?" he asks via text.

Silly question. Street food is the great equalizer.  We schedule a meet up at the Polish Truck, which is selling its wares on 47th between Park and Madison.    Ford is dressed in his usual spectacular designer business attire, while I'm far more casual in a button down and a pair of khaki Dockers.

Ford looks me over critically.  "I'm quite certain that Dockers are banned in Poland," he says.

Whatever.  Perhaps I should have come dressed as a Polish sausage. 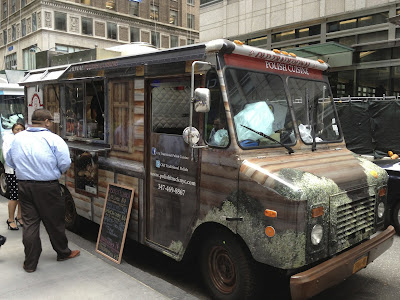 The Polish Truck is doing a brisk business, and in fact, the whole stretch along 47th Street is a Food Truck nirvana.   The number of trucks and selection of international cuisine is staggering.

The Polish Truck is decorated with a faux wood appliqué, evoking a traditional, old-time sausage cart.   An illustration of a comely Polish lass beams down at us. 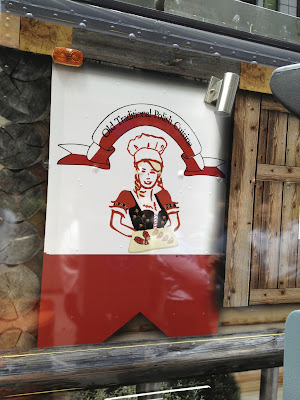 Ford orders a selection of cheese and potato pierogis.  I order the "Lite Combo Platter," which includes a massive hunk of kielbasa, four pierogis, a sour pickle and some rye bread.   So how is this possibly considered a  "Lite" platter?   My official source for all things Polish tells me that in Poland, the definition of "Lite Platter" most likely means there were four pierogis instead of ten. 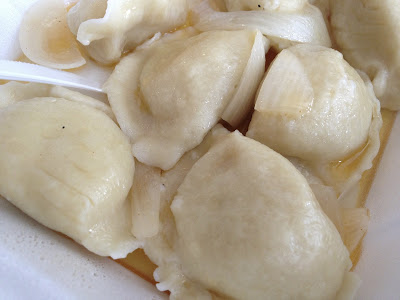 Of course, a sweet finish for lunch is a must, so we order a serving of the Polish Truck's famous blueberry pierogis with sour cream.   Far from lite, that would be ten pierogis to a serving.   It's not really clear if this is meant to be a dessert, or a gargantuan entree, but it's summertime and blueberries are in season. 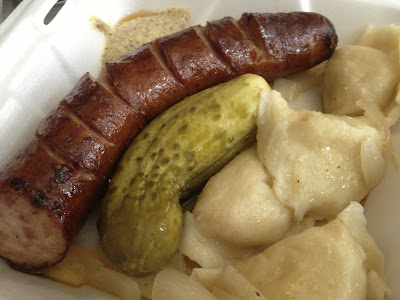 So, where to eat? It's a beautiful summer day, and some readers (you know who you are) might wonder why we are not dining outside. Ford insists that lunch should not include exhaust fumes or sidewalks.  So we head for the nearby W Hotel on Lexington, and grab a seat in the lobby.  The hotel is said to be "an urban oasis inspired by natural elements - earth, fire and water."  So if we use our imagination, it's kind of like an Oktoberfest in the Polish countryside, except Ford is drinking Pepsi instead of beer. 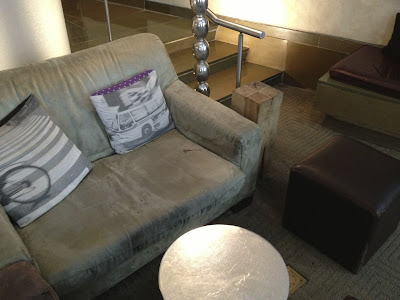 "I love this lobby," says Ford.  "You can sit here for hours and nobody bothers you."   It is a comfortable and expansive sunken living room decorated in earth tones, and it's unlikely anyone will notice two guys surrounded by Styrofoam food boxes.  However, the distinctive and intoxicating aroma of fire-grilled wurst begins to permeate the lounge and turn a few heads.

The grilled kielbasa is extraordinary.   About 9-inches long, it is savory and chocked full of chunky layers of meat.

The pierogis are plump dumplings stuffed with creamy cheese filling or rich potato puree.   I'm on the verge of a happy Polka dance.

At this point, Ford's Pepsi topples, and spills all over his brand new pair of designer shoes -- and the hotel lobby rug.  This is the peril of an indoor picnic, but we gather our napkins and mop up his shoes.    At least the carpet was slightly more worn than the spanking new carpet that now features a pizza sauce stain at the Waldorf.  We do tend to leave our distinctive mark wherever we go. 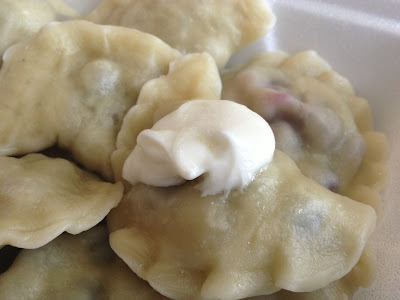 The blueberry pierogis literally bleed blueberry sauce. Ford tops the massive plate of stuffed pillows with a dollop of sweetened sour cream, and in a minute, it all starts to look like a Jackson Pollock painting. 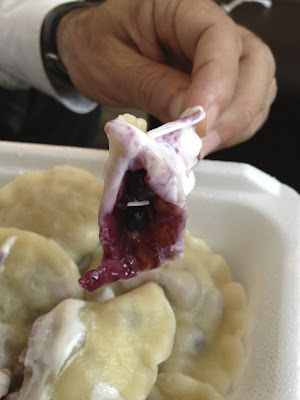 I probably consume a few too many blueberry pierogis - but my doctor says I should get more antioxidants into my diet.

I'm trying to be organized and I have stacked the empty Styrofoam food boxes on one of the leatherette-upholstered ottomans.  As we gather the trash in preparation to leave, I notice that my plastic knife has cut through the bottom of the box, and there is a pool of delicious melted fat residue seeping out of the Styrofoam and collecting on the top of the ottoman.   It's that glistening, juicy slop that typically tastes so good mopped up with the rye bread.

Ford points accusingly to the pool of liquid. "That is now in our stomachs," he declares like a charter member of the food police. Always the epitome of five star service, he heads over to the nearby bar and returns with a hefty stack of napkins.

"The great thing about hotel dining," says Ford,  "is you always have everything you need handy for those emergency cleanups."

We wipe up the grease, and the leatherette literally shines with new life.   Add this tip to Martha Stewart's list of Good Things.  And, be careful where you sit, the next time you stop by the W for a cocktail.

I'd love to be a fly on the wall when you and Ford get together for one of your food truck lunches. I'm laughing out loud. And thanks for the warning. I will now watch where I sit, in any hotel lobby in midtown Manhattan!

I too would love to be a fly on the wall in one of these hotel lobbies when you and Ford descended with your lunch and drinks.

I can't get over how much food you got on the "lite" plate. That would be called a plowman's lunch in many cultures.
Sam

I am so happy to see that you and FORD are reunited as this was one of the hardiest laughs of the summer and my polish step mother kept asking me, "what is so funny about polish food." I said, "well any food combined with TW and FORD is a belly full of laughs, truck eats and dining mishaps in posh settings. Great Post. I saw this truck a few months ago and was so impressed with the graphics... pretty awesome.

I have a Polish friend and have had the opportunity to enjoy some good Polish food ( the trip to Chicago was and enjoying an authentic Polish meal was pretty amazing too).

Welcome home to you!

YOu guys are a panic. I love the way you take over lobbies and leave your mark. The Polish food looks delish if a bit on the heavy side. How do you work after eating perogis???

I also have 2 Polish friends & they love their pierogis so much, so do I!

I never tasted sweet ones, like a dessert! Yhat must be so nice!

Lucky you with your food trucks! You can learn & eat yummy foods from many different countries,..;Lucky you! :)

If you ate on the street, there would be no need for clean-up...that's all I have to say about that. Now, dessert pierogis - that's something I could get into!

If there was ever a time I needed a bite of Polish food with a hearty dose of laughter this morning was it. Oh my goodness, you guys are a sitcom for a revival of Abbott & Costello.

I can't imagine doing anything, not even cleaning up, after eating so much delicious food. I too must ask, How do you go back to work after such goodness?

Now of course, I have the Riverhead Polish Festival tapping loudly in my brain:)

Thank you so much for sharing your escapade with us T.W...

Dear T.W., Thank heaven Bloomberg was not dining there! I don't think he would have approved of the lunch portions!!
I love food such as this. It is comforting and good too.
Blessings, Catherine

Ah ! Ah ! Ah ! I can't believe it !! I love to read your adventures with Ford, i've got the feeling to read the adventures of two children !! And really, I can't imagine those scenes in france, in french restaurant !! Thank you for making me laugh !

Someday I'm going to see that you have made the evening news on TV...two men are being barred from every lobby in New York City. :)