Attack of the Toast Monster 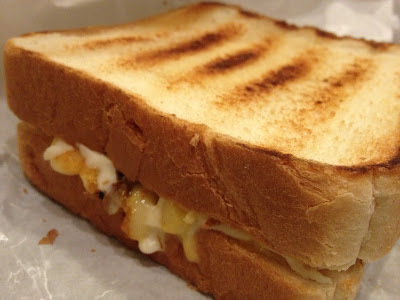 What you’re gazing on is a monster mash up of breakfast, lunch and dinner.   It’s the grilled Mac & Cheese Texas Size Sammie (that’s street lingo for sandwich) served up by “Toast Monster,” and it’s a massive collision of cheese and carbs.  Be afraid.  Be very afraid.  Perhaps I should explain.

For weeks, I’d been tracking Toast Monster, the latest food cart rumored to be on the street.   Not a truck, but a cart-like vehicle.   Kind of a large glass-enclosed gondola on four wheels.   Mac & Cheese on toast??!!  What God fearing suburbanite could turn that down?  It’s ethnic food for WASPS.  Yet Toast Monster had proven to be as elusive as the legendary Bigfoot.   I’d go out of town, and Toast Monster would appear on 50th Street with elbow macaroni sizzling on the griddle.   I’d return to town, and Toast Monster was off the street for repairs.  My stomach was getting extremely frustrated. 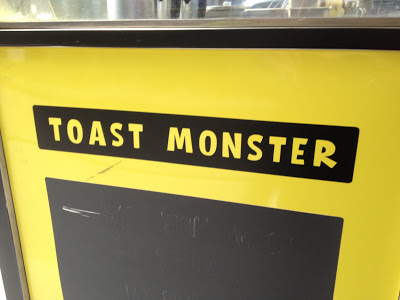 Finally, one Monday morning the stars align.   Toast Monster is spotted on 47th Street near Park Avenue gearing up for lunch.   I persuade my college roommate “Ford McKenzie” to join me for the chase.

I’ve suspected for some time that Ford is a bit ambivalent about my efforts to drag him into this questionable culinary sub culture.  However, even though he tells me, “I’m a lover, not a hunter,” he’s game and agrees to rendezvous on 47th Street at the appointed hour.  Ford’s Mad Men office is just a few blocks away on Madison, but it’s a bit of a walk for me across town.   As I near the site, he texts me, “I’m here.”

“Is the beast growling?” I text back.

“It’s a little smaller than I thought,” he responds.

Indeed, positioned next to a massive canary yellow food truck, the diminutive Monster looks a bit like a pussycat. 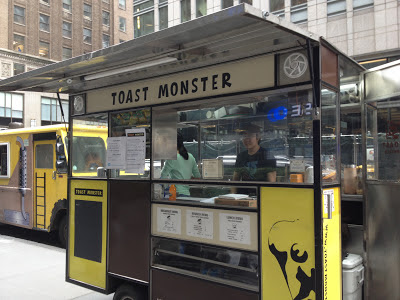 Ford is dressed for comfort food on the street.   “I decided to wear my 1960’s Glenn Plaid slacks and scuffed Gucci loafers since we were hitting the pavement,” he says.  Once again, Ford is the trailblazer, adding sartorial style to the street food experience. 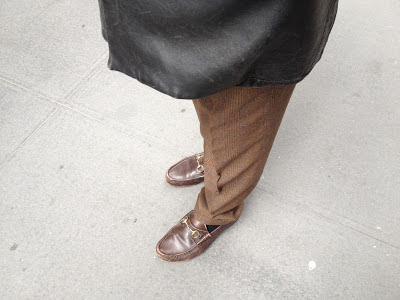 The Toast Monster is kind of like a wild animal’s cage, with the griddle and grill roaring inside.   The glass barrier makes it easy for us to see our lunch being prepared.   I explain to Ford that according to street food etiquette, you have to order a couple menu items so we all get a chance to sample. 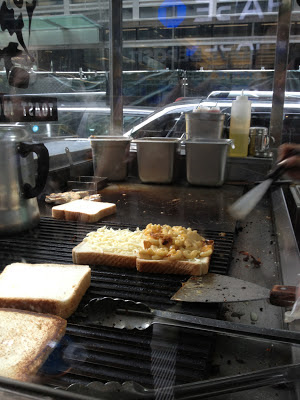 So we make a deal with the Monster, and get one grilled Mac & Cheese Texas Size Sammie that features stringy mozzarella, macaroni, buttered toast, and a whole lot of cheddar cheese.   Our second choice is the Chicken Parm Sammich, offering chunks of Italian-seasoned chicken breast, tomato sauce, mozzarella cheese and grated Parmesan cheese on two pieces of garlic toast.   Just for a little extra variety, we throw in an order of Sloppy Joe Sauce to embellish the Mac & Cheese.  For dessert, we order one of the Monster’s signature sweet finishes – a French Toast Sammich drizzled with maple syrup with walnuts and coconut tucked in between the slices.

“Does that come with a defibrillator?”  Ford asks.  The Toast Monster is not amused and just snarls venomously. Ford’s still a little miffed that I publicly maligned his culinary instincts in the write up of our last food truck adventure, and even more disturbed that Zany gave him a thumbs down in the comments section for taking his street food indoors.

“I don’t need that kind of smack down,” Ford says testily.  “Zany’s retired, and we’re taking a new approach now.”  He starts trotting towards Park Avenue.

Now that's the kind of trash talk we expect on the street.  I don’t even want to think about how that comment’s going to fly on the streets of Chicago, but I gather up our sacks of food, take a deep breath and follow Ford towards the East Side.  Before I know it, he’s bounding up the steps of the palatial Inter-Continental Hotel. 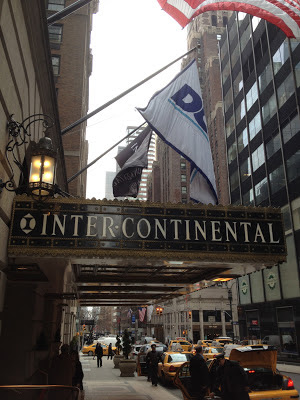 He makes a beeline through the marble and gilded lobby to a quiet area where a sofa, coffee table and chairs are arranged beneath an oil painting. 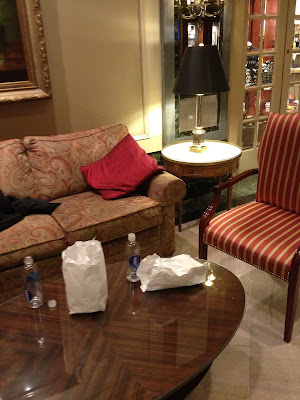 We crack open the bags and inspect the monstrous menu.  Of course it’s all about the bread – thick, crisp and seared with beautiful bronze grill marks.  The Mac & Cheese Sammich is a mile-high stack of golden Texas Toast oozing with elbows and creamy cheddar.   The carbs-on-carbs layering is strangely narcotic. 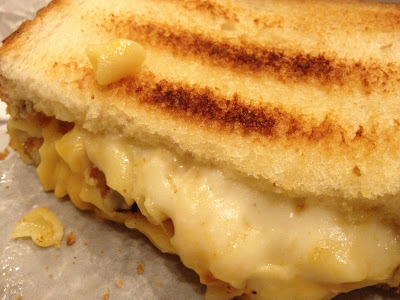 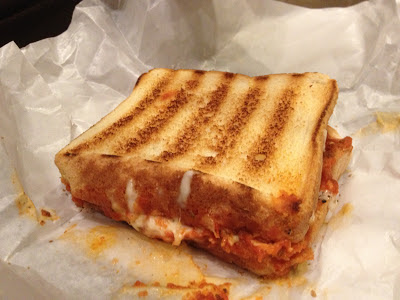 The Sloppy Joe sauce is an arresting accent – the mac & cheese kind of mellows the spicy sauce. 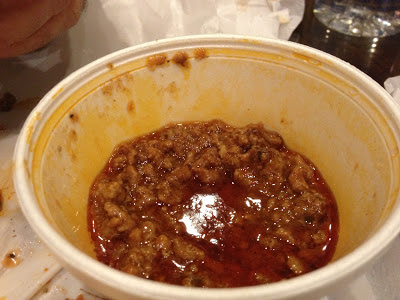 So, a little toast, a little lunch, and with the French Toast Sammich, we are back to breakfast again.  The breakfast of champions. 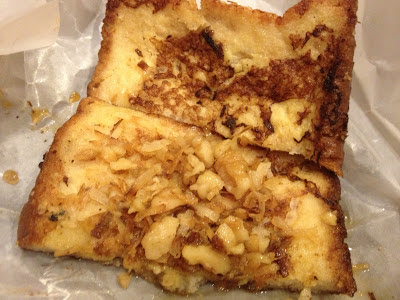 As we eat, a parade of well heeled tycoons and international travelers pass by and I know they’re wondering why they’re sniffing the distinct aroma of toasted bread and macaroni and cheese.   Frankly, this mash up of “street food dining while squatting in New York’s finest hotels” is beginning to grow on me.

Lunch is complete and Ford bags up the trash and glances down at the gleaming marble floor.   “If I had known we were going to dine in such opulence,” he says, “I would have polished my shoes.”

Later that afternoon, Ford pings me.

“How are u feeling?” Ford writes.  “The caloric shock is making it difficult for me to bend my wrists, and my office suddenly doesn’t seem quite big enough for me.  I think I am going to need to string up an irrigation line from the water cooler to my mouth for the rest of the day.”

A nightmarish end?  Indeed.  I guess that’s why they call it the Toast Monster.  Grrr. 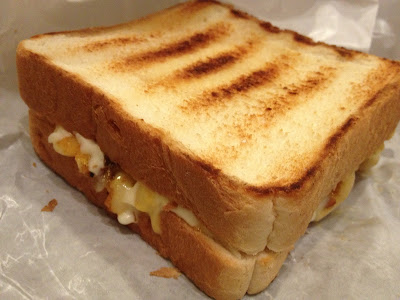 What a yummy gooey to-die-for sandwich. I feel like I've stepped back to the fifties.

Ford sure knows how to pick the best tables doesn't he.
Sam

Another great destination --- everyone needs a little artery clogging goodness everyonce in a while!

I'm in love with Ford. He's adding class to the food truck experience. Please continue to tell us his manner of dress...this was perfect.

I'm still puzzled about hotel lobbies being public...next trip to NYC I'm going to drag my daughter to a food truck and the closest lobby just to see what happens.
Lord, I hope you didn't spill on that furniture! Such droll worthy food, I would have made a complete mess of things. I bet you and Ford didn't spill a drop.

Barbara - I'm still not entirely sure that Ford is accurate about the public space. He tends to push the boundaries a bit. I wonder if I could claim to be an innocent bystander who was just sniffing the food? In the back of my mind, I'm fearing that we'll take some street mac and cheese to the fancy Pierre Hotel and get thrown out on our behinds!

I love the addition of FORD and the hotel lobby dining experience. Street food meets marble floor ambiance is a brilliant contrast on many levels. How you all were able to tread work after that intake is beyond me... I would have sunk! :)

Totally love the idea of street food eaten in any fancy hotels. I should try that. These sandwiches would be killer for me :)

I admit I'm kind of liking the hotel lobby aspect to this food truck experience. Heat in the winter, a/c in the summer, snazzy rest rooms....

As you know, I LOVE hearing about the food truck adventures. Ford adds a little more "flavor" to the mix. Somehow, the mac and cheese on Texas toast seems a bit much for me :-)

RETIRED?! I just bought truck food yesterday, thank-you-very-much. I'm going to ignore this rebellious phase you're in, TW (even though it does slightly sting). Perhaps it will give me practice for when my daughter turns 16.

Retired. Hmph. Those are fighting words...

That's just Ford talking trash, Zany. You know I have no control over what this cast of characters says or does. Never have. Never will.

Quite the outing, I must say. Ford has a unique style that's to be treasured. How can you not love a guy who homesteads at the Inter-Continental? Have a great day. Blessings...Mary

Hahahahahahhahaha: It was fun reading it all! You are some 2 lucky men! I would also totally devoured this tasty sounding & looking menu! And to savour & eat it in such a grand marbled palace: even better! !!!

I wish we had something similar over here in Belgium! They don't have such crazy tasty food on wheels!

Cheese decadence animal style. I love that you guys ate this lunch at a fancy hotel lobby. How fun that must have been. Oh and that dessert sandwich: French Toast Sammich drizzled with maple syrup with walnuts and coconut! Oh my!

Hysterical...his choice of the place to dine is perfect. The sandwiches looks quite good (can't bring myself to call them sammies). But that sounds like a once-a-year treat.
LL

Oh my. It does look dangerous, and you're definitely having a lot more fun at lunch than I am!

So so funny ! I couldn't believe where Ford and you went for eat a sandwich ! :D
In france, we couldn't do that !! :D
Anyway, this monster sandwich is making me HUNGRY ! It looks fabulous.

I can dig both sandwich and the food truck. I am sure I would be comatose after that sandwich. I suspect it would be worth it.

T.W., I fully approve of the clearly delectable morsels on which you dined-the sandwiches look delicious. But COME ON! Fancy shoes and hotel lobbies?! That is simply not street dining. Does Ford realize he's in NYC and not some cushy summer sleepaway camp? I mean this isn't Project Runway...I think I even saw a litlle blush of shame on one of your sandwiches because of it.I want to see another excursion with lots of meat consumed on the street!!

Must. Have. Toast Monster. Now.

Loved your post. Especially loved that you ate all that carby goodness in a swanky hotel while wearing your Guccis!