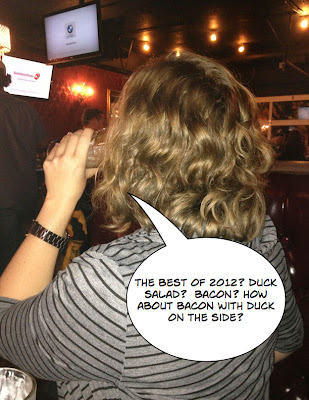 It’s that most wonderful time of year – the time for “lists!”  The best of, the worst of, the most pretentious, the cheesiest, blah, blah, blah.   When it comes to food, I sometimes wonder about the creds of these folks who are telling me what to eat and what to avoid.  Vegetables for dessert? Really??  What do they know?   For the genuine dish, I turn to a true culinary road warrior, the Siren of Street Food and the Queen of Cured Meats, the insatiable Mad Me-Shell for an all-you-can-eat feast of the best and worst of 2012 in food!

TW:  What was the best thing you ate this year?

MMS: Who could pick just one!? I know most will assume I will choose something like a quadruple bacon cheeseburger (that does sound amazing), but I think I’ll class things up a bit with this one!  I am still having dreams about the warm pulled duck salad I had this summer at Albannach, a fantastic restaurant and whiskey bar in London. This ‘salad’ featured green beans, bacon (yes, bacon!), shallots, sautéed potatoes and pulled duck. Unmmm, yeah, I had to be stopped from licking my plate.

TW:  What was the worst thing you ate this year?

MMS:  For me, this one is easy. I was at an event and tried one of the passed appetizers, a stuffed artichoke. Approximately three seconds after shoving said artichoke in my mouth, I realized I, in fact, detest artichokes. I got cold chills just reminiscing about this experience!

MMS:  Well I sure as heck hope it’s not small plates!! Seriously restaurants, enough with the small plates already, we get it.  I do think we’ll see a continued surge of old-fashioned cocktails on drink menus and chefs getting adventurous with some exotic animal meats (alligator, kangaroo, etc.). Most importantly, I HOPE 2013 will further solidify the local food sourcing trend for restaurants.

TW:  Who's your favorite celebrity chef?

MMS:  Curtis Stone! He is a highly trained chef with a simple food philosophy and approachable recipes that appeal to a culinary novice such as me. And I guess he’s not bad to look at. No seriously, Curtis, call me maybe?

TW: Who do you think is the most annoying celebrity chef?

MMS: Jamie Oliver! Jamie Oliver. Jamie Oliver. His restaurants and television shows present laughably contradictory points-of-views and his recommendations are largely misinformed. I could go on all day…

MMS:  You just had to go there, didn’t you? This hurts my soul to admit out loud, but Totino’s Pizza Rolls are just little slices of meat-filled heaven. I have surely eaten more of them in the last few years than any human should consume in a lifetime.

TW:  If you could start a food truck business, what would you serve?

MMS:  I feel confident a ‘liquid’ food truck would be a hit! Zany and I would start a bar on wheels…what could go wrong?!

TW:  What are you eating on New Year’s Eve?

MMS:  Whiskey and Champagne. What? Do people actually consume anything other than booze on New Year’s Eve? Oh, they do? Hmmmm, I’ll probably still just stick with the whiskey/champagne combo!
TW: If you were in an Iron Chef competition - what would the secret ingredient be?

MMS:  Is bacon too obvious of an answer?? Man, I love bacon…what were we even talking about? Oh, yes. You know what? I’m still going to go with bacon!

Love Mad Me-Shell's list. I'd be her BFF if I knew her....will be even though I don't know her. :) Bacon, Booze and Stone. Total agreement.

THAT put me in a great mood!!!! Too funny for words and I agree about Jamie Oliver. The other chef looks like he should be married to the American Idol winner (forgot her name) but they look like twins.

Always love the posts when Mad appears. She's spot on about Jamie Oliver and now I've got to find out more about Curtis. Hmm, he does look interesting. I also totally agree about bacon. Pork fat rules.
Sam

How could anyone not love Mad Me-Shell? I love her idea for a food truck. It would give new meaning to a "quick pick-me-up". I would love to have been a fly on the wall when you guys were working together :-). Have a grand week T.W. Blessings...Mary

Love this post absolutely and I love Jamie Oliver recipes, I love how he cooks without problems and with love for he makes:))

Mad, I'm a bit surprised that the "ragu of the day" from Davanti Chicago in Little Italy didn't make your list. When they spread that polenta on the cutting board and topped it with a bounty of meat, I thought you were going to faint quicker than a 13-year-old at a Bieber concert.

Well, you know I'm still down for this whole traveling bar concept. We could keep it covert / Prohibition style, where a special knock opens a side window...

Just looking at that picture of Curtis made me giggle out loud :)

Zany, T.W.'s first question was just unfair! How could I have possibly picked just one dish as a favorite?! I had visions of burgers, ragu and bacon just running through my head!

This post is also why I couldn't become a real vegan/ It is the fault of the lovely bacon!! hahahhahaha!

I loved reading this funny & well written post with a sense of real humour! Ha!

I am going to dream of pulled duck salad... and try to make it.

Have a great holiday... love the food trends... great tips with a sense of humor... that a perfect way to do it.

I knew I would like her, but when she picked Jamie Oliver as most annoying chef, that clinched it!

Call me maybe indeed! You never fail to inspire a laugh Mad Me Shell! I'd love to see a competition where bacon was the secret ingredient.