Whiskey for Everyone and a Make-Your-Own Burger Smack Down 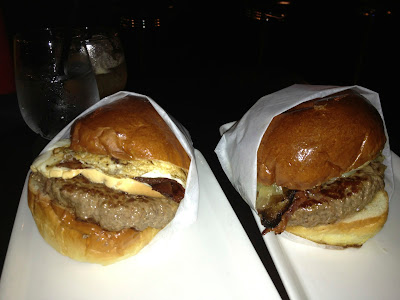 I notice a slight touch of perspiration on my brow as I hop from my taxi in downtown Chicago.   Is it the unusually warm autumn temperatures in the Windy City?  I think not.   Is it the suitcase I’m lugging packed with my business clothes?  Negative.  It is nerves - flat out culinary pressure.   I’m dining with my old pal Mad Me-Shell, and she’s already transformed the meal into Iron Chef style event. 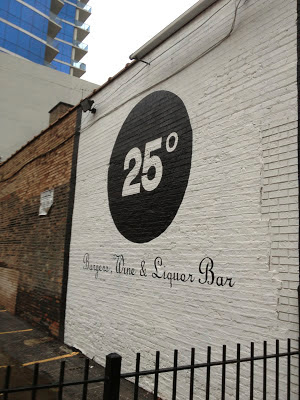 It’s no secret that Mad Me-Shell is a fierce competitor.   She’s famous for challenging complete strangers to street food duels on Twitter.   This time, she’s got me on her radar.    I’ve been invited to meet her at 25 Degrees at 736 N. Clark Street, which is described as “Bordello meets Burger Bar.”   Sweet!   “And,” adds Mad Me-Shell,  “They have a build your own burger option, so we can have a little competition.”

Why do I feel like I’m being set up?

Zany has decided to sit this event out.  She’s roughly seven months pregnant and the little bundle of joy is just wearing her down.  Personally I think it’s kind of a lame excuse.  What unborn child wouldn’t enjoy a healthy shot of all-beef protein?   We’ll have to check back in a couple of years and see what impact this decision to deprive the youngster of 10 essential nutrients has had.  Oh well.  I’ll just have to eat her share.

I take a seat in a banquette surrounded by red velvet wallpaper.   Already I’m feeling a little frisky.   Mad Me-Shell breezes into the room, and lays down the gauntlet.  Or maybe that’s her credit card.  We consult the cocktail menu.   “Whiskey for everyone!” Mad proclaims.   I order a “Mayday,” which consists of Maker’s Mark, Domain de Canton ginger, oranges and soda.   Mad has a “Whiskey Smash” made of Bulleit Bourbon and lemon mint.    My guard is up.  This woman is no novice when it comes to whisky.  She can drink the WWF under the table. 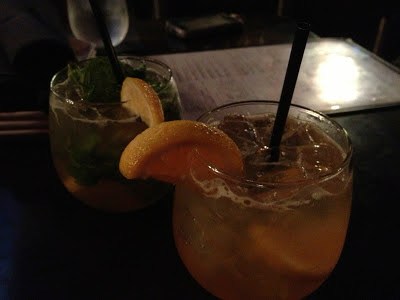 Mad has just returned from a whirlwind culinary tour of London and Paris with her mother.  “My mom was such a good sport,” she explains.  “I dragged her down a dark alley near Covent Garden in search of an elusive European food truck.  We had the most amazing Neapolitan pizza!  Mom said, What ever you want, dear.”

On the home front, she’s faced a few kitchen nightmares.   The other night, she threw a baby shower for Zany and the oven crapped, out forcing her to pan fry the pork tenderloin roast as kabobs on the stovetop.   For Mad Me-Shell, necessity is always the motherhood of invention. 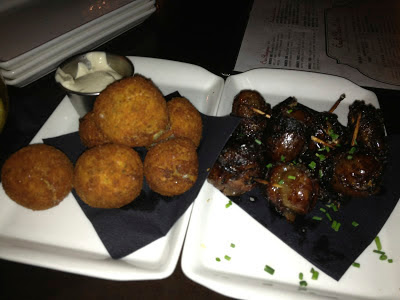 Despite the bacon wrapped dates and potato and 3 cheese fritters, Mad’s eyes keep drifting towards the football game on TV.   It turns out she’s enrolled in a suicide football pool, and she’s destroying the competition.

After another round of cocktails (“You know I’m a whiskey girl,” Mad reminds me.) it’s time for the moment of truth.  It’s time to build that burger.

Mad gives me the stink eye and scrutinizes her menu.  I carefully consider my flavor strategy, and decide to go for a healthy dose of umami.  My signature burger is composed of ground sirloin, caramelized onion, portabella mushrooms, Applewood smoked bacon, fried egg and grand cru gruyere surchoix. Mad decides to go a bit old school and selects ground sirloin, roasted tomato, jalapeno bacon, fried egg, and smoked mozzarella.   The twin peaks are towering burger creations, and we divvy up the goods, so we can each sample. 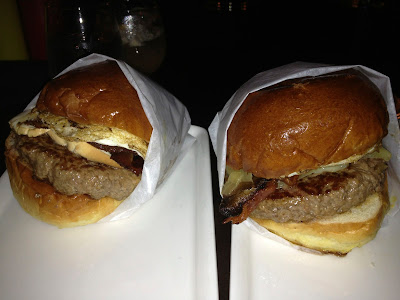 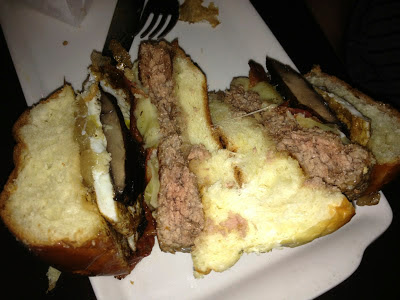 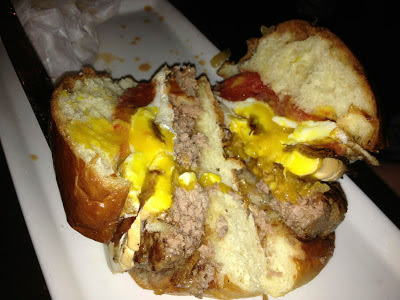 Without Zany as referee, we are each forced to play the dual role of competitor and judge.   Mad, dabs her mouth with a napkin, looks up from her plate and says slowly, “It pains me to admit it, T.W., but I think you may have built the better burger.” 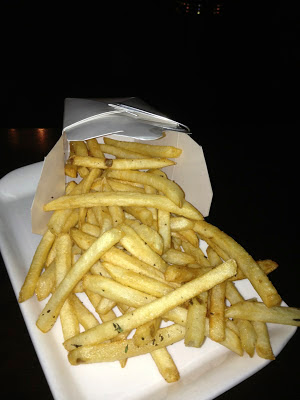 Score one for 20 weeks of culinary school.   But it’s kind of like having Julia Child surrender to Jacques Pepin, or Bobby Flay turning the keys to the restaurant over to Giada.  It just doesn’t feel quite right.    So, rather than me take a victory lap, we decide to jointly toast ourselves with some spiked milk shakes. 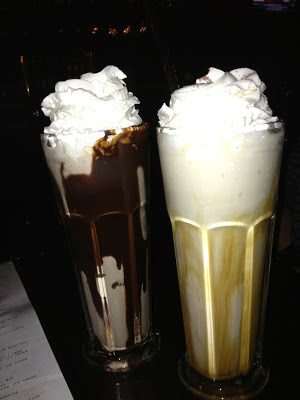 I take a sip of my milkshake and gasp a little screech of sheer delight.

At the risk of being uncouth, I slurp the bottom of the glass with my straw.  Several times.  Some folks at the bar turn their heads, thinking the L train is rambling by. 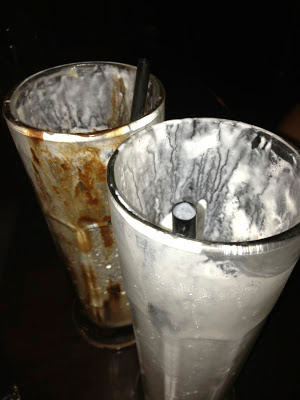 As I leave Mad Me-Shell for my final destination of the evening, she is enjoying the last few drops of her Guinness Milk Shake, checking her status in the suicide football pool, and already plotting how she’ll corrupt the diet of Zany’s little one during her first gig as baby sitter. 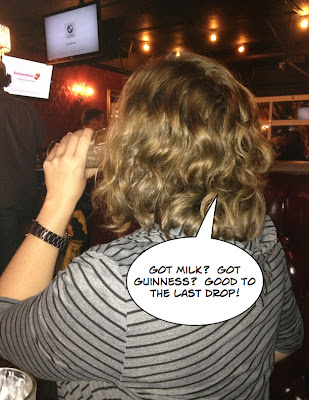 Oh, how I love reading of these adventures! I would have picked your burger too. I love a great homemade burger from the grill with lots of options to pile on! You are such a great story teller.

I too love these Madcap devouring adventures of yours T.W. especially when the "girls" are involved. In Zany's defense, I must say, I agree with her decision. Give her a few months and I'm sure she will create a burger that would knock both yours and Mad's socks off!!!

Notice I'm not picking a "winner" here. I want them both!!! I can't remember the last time I had a "real" hamburger. They don't seem to exist in my neck of the woods.

Thanks for sharing, T.W. Good Luck riding out the storm!!!

These vignettes are hilarious! I'm going to have to meet up with you one day in New York for our own culinary adventure. The burgers sound amazing, yours utilizing some luxurious ingredients, but the milk shakes!!! I would have dropped everything to make space for the milk shakes.

As I sit here finishing off the burger I ate for lunch today (that's right, another burger - I needed the iron!), it pains me to recall your victory, T.W. However, the mushroom really put yours over the top! It is also with a heavy heart that I must announce I lost the football pool this week. I appreciate everyone's support during this very difficult time. Perhaps another one of those spiked milkshakes would help ease the pain!! :)

This post makes me feel better because the last time I went to 25 Degrees with Mad, she kicked my butt in the burger challenge.

Glad you had a good time - and it certainly looks like you ate enough for me, too!

Sounds like a wonderful food adventure. Your milk shake sounds terrific. I would have been slurping too.

I love reading all about your adventures & the culinary escapades you make!

I love reading your adventures with the girls. Congratulations on the win.

Hope you are okay after the storm and that you didn't have any damage.
Sam

What an adventure! I stopped by to see how you weathered the big storm. I hope all is well. Let us know. Blessings...Mary

Sam and Mary, thanks for your concern. It was not a storm I'd like to live through again, but we were relatively lucky in the scheme of things. My family is safe, although my brother's home had some significant damage. However, everyone is OK. I've had no power since Monday afternoon, with no indication of when it will return, so I'm getting good at roughing it. Small improvements each day, and I managed to get to work today via an electric train, so we're hopeful.