One a Penny, Two a Penny, Hot Cross Buns 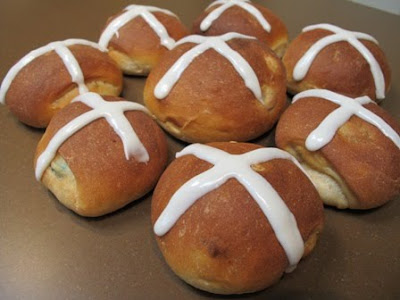 The catchy phrase above is actually an early form of a marketing jingle that English street merchants used to sell hot cross buns on Good Friday centuries ago.
Today, the jingle is less prevalent, but mass-produced hot cross buns certainly flood the supermarket during the duration of Lent, costing a bit more than a penny or two. There’s a certain charm to the verse, but it would give me pause if the bakery manager at Stop & Shop broke into song. 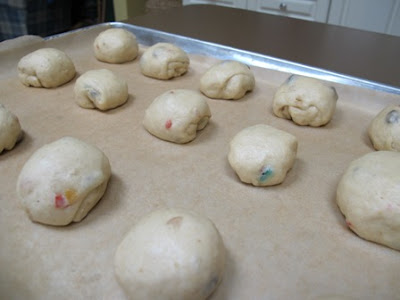 This is my second attempt at making hot cross buns, and my first success. The sweet yeast dough is enriched with egg, butter, citron and raisins and scented with nutmeg and cinnamon. As the fragrant aroma fills the kitchen, I look into the history of this traditional Good Friday baked item that many believed held extraordinary powers – perhaps an eighteenth century super food. 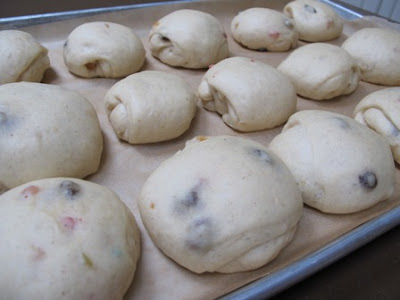 The earliest recorded mention of hot cross buns is from Poor Robin’s Almanack in 1733, although stories of buns stamped with a cross to mark the crucifixion of Christ date back as early as the Middle Ages. Some believed hot cross buns could cure disease and others thought the loaves would never mold or decay (one would suspect the commercially-produced buns contain enough preservatives to deliver on that promise). 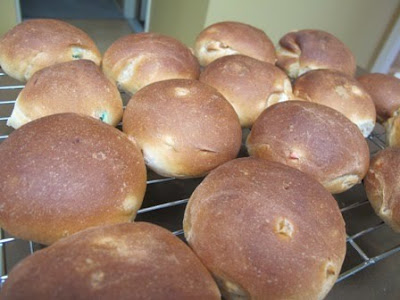 Other historians believe that associations with the bread of the Eucharistic meal – also stamped with a cross – and the imagery of Christ as the bread of life contribute to the supernatural lore associated with hot cross buns.
One custom involved people hanging hot cross buns in their homes all year long to protect against sickness, fire and other calamities. It would be an interesting experiment to try, but I don’t think my hot cross buns will last that long. 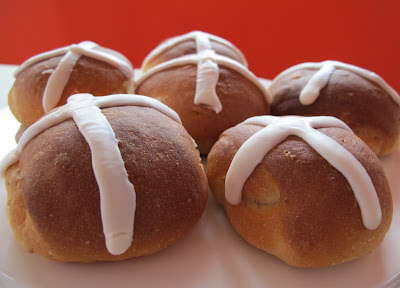 (Don't forget you've got just a few more days to participate in the giveaway of "The Encyclopedia of Sandwiches." Leave a comment on the previous post and mention your favorite sandwich by 11:59 PM EDT on Saturday, April 23, and you'll be eligible to win a copy of Susan Russo's new book.)
©2011 T.W. Barritt All Rights Reserved
Posted by T.W. Barritt at Culinary Types at 12:15 AM

I've known that jingle since I was a child, but have never tasted (or seen) an actual hot cross bun. Thanks for the story behind the buns and the advertising lingo.

Hope you have lovely Easter weekend T.W. I'm still dreaming of sandwiches and that give-away. Nothing beats a good sandwich.
Sam

Interesting history about the buns... I had no idea! I may have to try making a batch.

It almost looks in the photos as though there is candied fruit in the buns! To me they look perfect, right down to the icing.

Who knew that such a simple treat had so many uses? I also read somewhere recently that members of the middle-ages, English peasant army, after hanging leftover hot cross buns in their huts until the buns aged to an appropriate hardness, used them as weapons against the French during the 100 yr war.

You know, I've never made the little buggers. Remember being served them by an old friend of my mothers... I think they were weeks old and I could barely gag them down with a gallon of milk. Then I made the horrible mistake of telling her they were great and got another one... argh. Haven't touched them since. Decades later, well maybe it's time to taste one again... bet they are mighty tasty!

T.W., I could easily take a couple of these buns in the morning and enjoy them with my coffee. Like Sam, I don't think I have actually eaten a hot cross bun (sigh). We would be good neighbors, if you lived closer.

Hope you and your family have a Happy Easter.

Oh I love hot cross buns! These soft and steamy sweet rolls with creamy buttery icing. This is one of my favorite things about Easter, it rivals the Easter bunny chocolate.

They look perfect and I'm sure they are really delicious. Have a wonderful holiday, T.W. Blessings...Mary

I am enjoying a couple of fresh, locally baked Hot Cross Buns this very minute with a cup of hot tea, even though the buns lack the small amount of candied fruit, zest and spices that a true English bun would have. I always look forward to Easter and its traditions. Happy Easter to everyone.

Congrats on the buns T.W! They look heavenly. I love the side dish of history.

Wishing you and yours a glorious Easter, T.W:) "See" you when I return!!!

You did a great job with the baking.....I bought mine...know yours were much tastier!