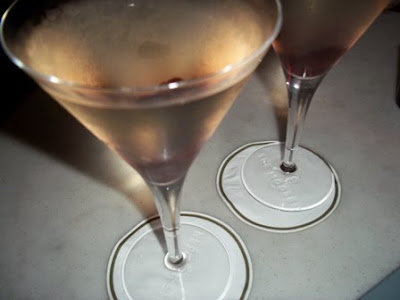 Growing up in suburban Long Island, I was terrified of dogs – in particular, one white dog named Pom Pom. That’s right. I lived in fear of a white poodle with a really sissy name. Pom Pom was vicious. Her owner would keep her cooped up in the house all day and then look the other way when she escaped through the front door. Pom Pom would run straight for me. It happened over and over again and it was traumatizing. I’ve gotten better, but I’ve never really been comfortable with dogs. You never quite get over these childhood associations.

So, I was just a little apprehensive when my college roommate “Ford McKenzie” suggested that we sample the “white dog” whisky recently profiled by the New York Times. In case you missed the story, white dog is raw whisky, also known as “moonshine.” Produced by craft distilleries, it’s all the range, and it’s darn potent.

Ford shows absolutely no sympathy for my residual childhood demons. Says Ford, “That poodle was a walk in the park compared to what’s going to be in our glasses.”

So we convene at the Modern for a taste of their “Devil in White” cocktail – a violent brew of Death’s Door White Whiskey, Dolin Blanc Vermouth of Chambery and A.B. Smeby Black & White Bitters. Two shimmering, iridescent, huge cocktails are delivered to our table garnished with tart, brandied cherries.

It looks to be the height of sophistication, but is it my imagination, or do I hear growling? I take a sip. It tastes smooth, balanced, brisk and velvety – I’m thinking white cashmere on a chilly day.

Ford tastes the cocktail and lets the effect wash over him. “I guarantee this is gonna bite us,” he says.

I take another small sip. I still taste the luxury, but suddenly there is something bald and feral going on. And, I can no longer remember a thing that happened to me in 1979. Don’t misunderstand me. The Devil in White is yummy, but it’s ferocious.

Ford seems to have a much greater affinity for wild animals. He wants a second. I’m feeling my memories of 1980 slipping away even as we speak. But, I meet him half way and we split the second cocktail. It’s a dog walk on the dark side, but I just manage to escape with my life. We chat briefly with Nancy Schumann, a manager at the Modern and I barely refrain from smothering her with wet doggie kisses. This ain’t no velvet painting of a dog, but a modern work of cocktail art.

Ford has planned out the evening with his usual meticulous sense of adventure. Our next stop is the steak house Patroon, that on Friday night serves a special fried chicken dinner by Chef Charles Gabriel. (I’ve heard of chicken and waffles, but chicken and dog? I don’t get it, Ford.) Turns out, it’s a soothing, clubby environment with a snappy piano and bass jazz duo. And, the three pieces of crispy fried chicken, sweet cornbread and choice of sides like macaroni and cheese, black-eyed peas and yams is enough to calm the still-raw memories of the canine cataclysm. 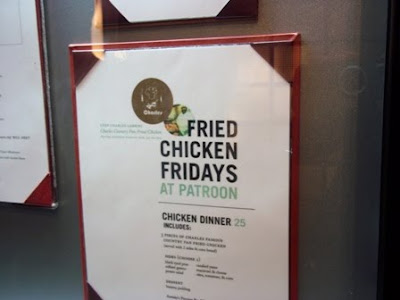 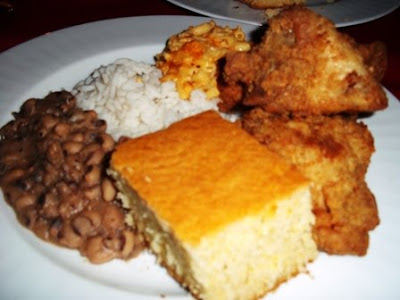 We eat the chicken with our fingers, and snarf down the entire dinner in record time.
Rumor has it Ford refuses to let sleeping dogs lie, and has made a return visit to the Modern. It's probably just as well that I didn't accompany him.

Well, if that story wasn't an eye opener. You see, T.W. unable to sleep this restless night, I've had a few "samples" myself. Not of moonshine. although...No white dogs passing me by yet but, perhaps, I too am a cat person because I'm off to nighty nigh and I'm thinking Pom Pom may invade my dreams.

Thanks for sharing...chances are, I'm gonna have one heck of a post for Sunday!!!

Thanks for that... I'm not afraid of poodles, but I think now that I'm going to be afraid of moonshine! Thank goodness, no fear of fried chicken and cornbread. The dinner looks amazing.

I grew up in the somewhat rural south. I was a city girl, but in college someone suggested we try some moonshine. They knew some old man in the country who would sell it to college kids. Being an adventuresome one, I couldn't wait. It was probably PGA, tasted raw & awful, but perhaps a good vermouth would have smoothed it some, but I doubt it.

I found it interesting that you had a southern dinner afterwards, complete with cornbread and peas. Very appropriate.

By the way, we sympathize with your poodle story. Fairly recently we knew a schnauzer that belonged to a friend of ours. He was a gentleman around his parents, but on his own he turned into a nasty, uncontrollable rottweiler and loved to bite your ankle. Bad, bad doggy, but he had his owners snowed.
Sam

You are the best story teller... even for someone who is not a big cocktail drinker.. the combination is intriguing. ANything that can go from cashmere to feral is my idea of exciting...and the Modern is a lovely place to experience brave new drinks.

Your writing is so good and so witty, you made that story about your childhood fear of dogs so interesting ! Pom Pom indeed! What a silly name, perfect for a poodle; I have no great love for dogs; prefer cats and find them way more interesting and mysterious; that story about the cocktail with your friend was also great; you are a great writer, you make something trivial sounds exceptional and exciting. I am impressed.

It's true--I've slready been back been back to the Modern a couple of times for more tastings of the Dog (as TWB knows, I am hopelessly and irrationally besotted with manhattans, and the Devil in White is a demented twist on the classic). In any case, when this Dog bites it doesn't let go-it's like liquid Pom-Pom--I found myself craving a splash during a mid-morning meeting last week. Now I understand the power of moonshine.

What's interesting about having fried chicken at Patroon is that it is such an incongruous experience. Patroon is a steakhouse for those who think none of the others in NYC is expensive enough. It is very master of the universe. The Friday Fried Chicken is overseen by a guest chef who is the owner/chef of a restaurant in Harlem and widely acclaimed for his fried chicken.Dinner is served in a private lounge upstairs (next to what used to be the cigar room, no longer in use since the NYC smoking ban). The entire dinner is $25 fixed price--which is a little more than half the price of a typical Patroon entree alone.

I like dogs and cats equally. I was chased by a big dog when I was young though. That fried chicken looks scrumptious!

You are indeed a great storyteller--I love your description of the cocktail. I've never tried moonshine, though rumor has it that my grandfather participated in the manufacture of it back in the early 30s in rural Arkansas. Now I'm curious enough to give it a try.

When told by a master story teller this becomes a perfect evening. You are very skilled my friend. Your work is always delightful and I would have loved to spend the evening with the two of you. Have a wonderful weekend. Blessings...Mary

I think I would like to be attacked by this" liquid" White Dog~what a bite this must have! Sounds like a pretty potent drink! The meal is off the charts,looking way too delicious.....you find the most interesting places to dine! And now, drink!!!I love it!!!! Thanks for a great post.....

A squirrel chased me once when I was a kid. I am still afraid of them. After all these decades, I don't think even a cocktail could help. Maybe make it worse, yikes!

TW, this is a cleever integration of your childhood experiences and the feroscious memories that lurk from years yonder. Ford seems like a real guys guy, and much like the drink will whip out the source of your traumas without mercy.

TW,
I love cats, dogs and THE MODERN!

THey make the best POM martinis and funny, my husband fell off one of their white mid century modern chairs. It broke and he fell to the floor. Funny at the time, but luckily, no injuries.
They bought us dessert and drinks for our troubles.

Love most alcoholic beverages except grain alcohol....& I have always been fearful of German Shepherds. TMI from me!

Stacey - I think you have to let me know the next time you're planning to have drinks at the Modern. We could walk the "dog" and fluff the "POM." I'd even bring Ford along.

I live in the south and there are a lot of folks who make their "moonshine" or what they call Koolaid or white lightning...They love to drink this stuff at football tailgate parties (college football is big in the south too)...I have kept my distance. I would like to remember my past and future life (smile). This stuff would set your hair on fire (laugh).