The Brooklyn Beefsteak – Guys, Red Meat and No Napkins Allowed 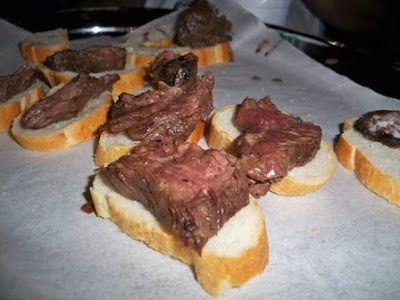 My college roommate “Ford McKenzie” claims I’m a bad influence on him. This, he attributes mostly to the Manhattan Cocktail imbroglio of 2009, of which I do acknowledge some level of responsibility.

But, lately, I’ve come to believe that Ford may in fact be the real provocateur and I am the unsuspecting victim. Recent events have prompted a recurring delusion. I see Ford standing just on the horizon, looking dapper in a Mad Men-style suit. He is summoning me with his index finger and a sly grin, and luring me into yet another compromising situation that results in deranged gluttony.

Take the recent incident of The Brooklyn Beefsteak. Perhaps you’ve heard of this noted New York tradition. Writer Joseph Mitchell immortalized The Beefsteak in The New Yorker magazine in 1939. The ritual might have begun in the late 19th century. Large groups of men would gather (often at a Republican club) and gorge themselves on an endless procession of steak and beer. Knives, forks and napkins were strictly prohibited. In fact, according to Mitchell’s chronicle, if you left the event hungry, it wasn’t a beefsteak, but just a dinner masquerading as such. Women did not participate. Eventually females were allowed to join in the fun, but with the equal opportunity came a certain refinement. It was never quite the same, according to Mitchell, and eventually the Beefsteak died out during a regretable phase of frugality.

Ford is a passionate New Yorker and local historian and becomes quite excited when he learns that The Bell House in Gowanus has revived the Beefsteak. An excursion is planned months in advance. Ford has assembled a cadre of carnivorous men – Eric, Matt, Richard and yours truly. I ask Ford if they are actually banning women at the Beefsteak or if we are just keeping up the tradition.

“Every time I mention this to or in front of a woman, I get a look of utter disgust,” says Ford, “so process of elimination.”

The Mitchell article says that male guests would wear tuxedos, or their second-best suit, grease being a significant factor in a Beefsteak. I’m not exactly sure what to wear.

“I think if you cut a hole in a shower curtain, wear it like a poncho and bring along a slop bucket you should be OK,” Ford advises. 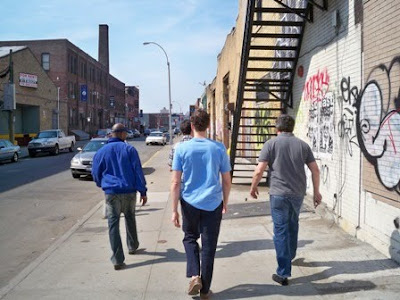 And so, we set out on our journey through an untamed district of Gowanus. Richard knows the area and mentions that there is a casket company nearby.

“Is that where they take you after the Beefsteak?” I ask. 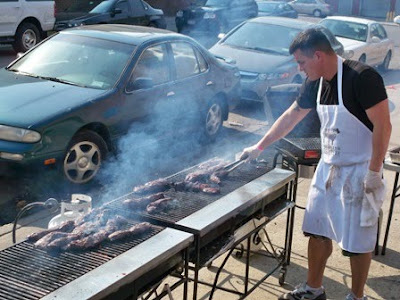 We approach the Bell House on foot, and plunge into a cloud of smoke. Large grills are set up on the sidewalk and hanger steak and skirt steak are sizzling in the afternoon sun. 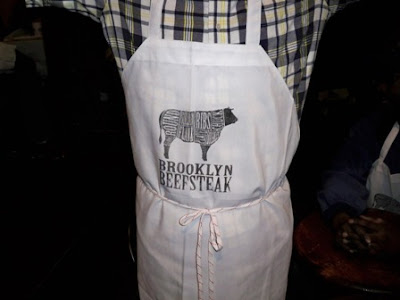 Inside the Bell House, we are handed white butcher aprons and our hands are stamped. We enter a cavernous room and face a sea of humanity. Close to 250 boisterous people are seated at banquet tables and a Brooklyn hillbilly band is performing on stage. The noise is deafening. Matt’s from Vermont. For just a minute, I wonder if this experience will do any permanent damage, but he seems resilient. Heck, he seems fully prepared to jump off the deep end … 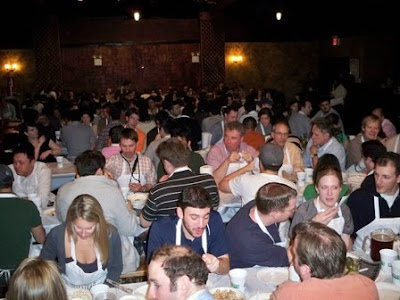 The cavalcade of carnivorous pleasure begins. It occurs to me that I am ravenous. The slivers of steak atop slices of bread are red and juicy, with a savory and smoky taste that just wraps you in ecstasy. One of the staff places a platter on the table, and all I can see are five sets of hands grabbing across the table. Steak is alternated with mini-burgers. In the tumult, one of my burgers falls to the floor. It stays there. 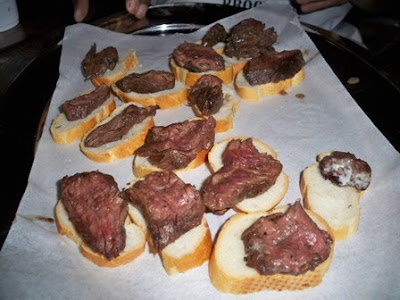 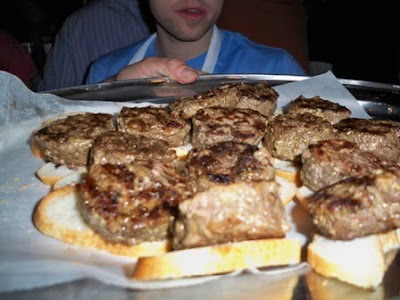 There are also heaps of potato salad, macaroni salad and pickles. We wash it all down with a torrent of McSorley’s Ale. 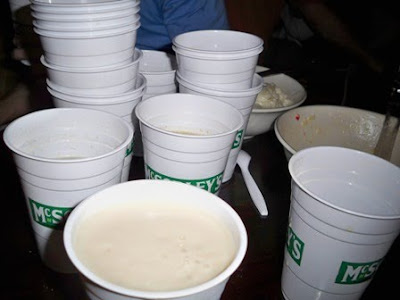 Ford is into to the Beefsteak etiquette and refuses to eat anything with utensils – even the macaroni salad. His apron looks like a Jackson Pollock canvas. I keep a roll of paper towels near my chair. He says I’m a wimp.
A leggy blonde in a blue denim mini-skirt and cowboy boots has dozens of slices of bread stacked in front of her like a set of poker chips. At first, I think she’s being carb conscious, but then, I realize that Eric and everyone else seems to be scarfing the beef, skipping the bread and collecting the slices. It’s all part of the ritual. The person who collects the most slices of bread has presumably eaten the most beef and is eligible for a prize. 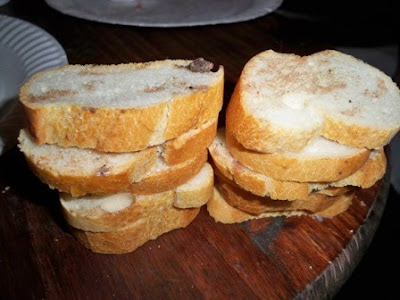 The beef and beer continues. It’s like manna from heaven. Or is it a Tudor banquet? No matter your reference point, there is something primal, dangerous and deeply satisfying going on. I’m flushed with beer, protein and B12.
By now, I’m feeling like I could use a green salad. “You know, it’s only 3 o’clock,” says Ford. “We need to pace ourselves.
After a point, I abandon any remaining shred of self-control and let myself succumb to the mob mentality. There is more and more meat. I mention to Ford that I’m in need of a palate cleanser. He can barely contain his ridicule. “You want sorbet?” he sneers. “You’ll be lucky to get ice chips.”
A level of smug satiety has sunk in amidst our team. 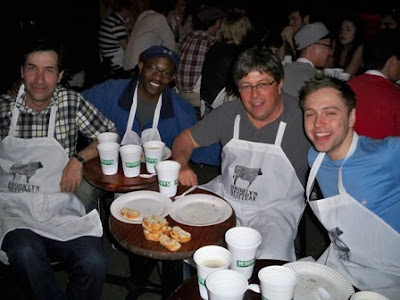 The crowd is slowing down. They are now several hours under the influence of umami. The leggy blonde has an architectural nightmare on her hands. 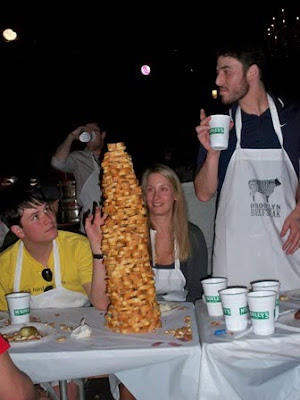 She accepts her prize – a t-shirt. It’s a lot of effort and digestive juices for a pre-shrunk cotton garment. The mob revives and is whipped into a frenzy. A food fight erupts, bread slices soaring through the air at a furious clip. 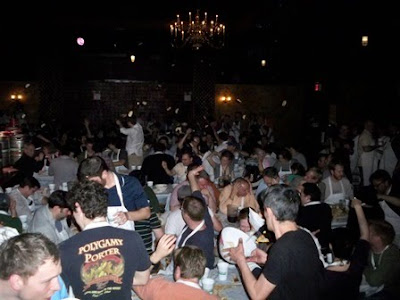 I haven’t seen this kind of carnage since college.
The aroma has changed – it is now a musky mixture of charred meat, stale beer and sweat. It’s time to go.
The lights go on, and we experience that self-conscious, squinty, uncomfortable feeling you get when you exit a movie theater on a summer afternoon.
Ford seems satisfied, though. “I liked the food fight at the end,” he says. “It made the day.”
Ford McKenzie – always a class act.
We leave the building – some of us still wearing our aprons – and looking like an squadron of butchers who’ve just gone off-duty. Within about an hour, Ford and I are queued up for ice cream at the local Haagen-Dazs shop.
Boys will be boys. 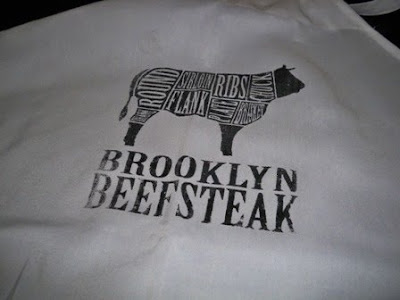 This is hysterical! Sounds like a great afternoon! And I'm thrilled to see that the woman out-ate the men. Too funny.

Initially, I thought "yuck" of course, I am woman. My husband thought "Yes!".....Did you know that in medieval times men used their beards as their napkin?

Everyone needs a "Ford Mckenzie" to take them off the straight and narrow every once in a while. I wish I could be like him.

Meat!!! This is appealing to the carnivore in me. A woman won? Fantastic! :)

Honestly, I'm laughing too hard to type! Except for the thought of eating so much red meat in one sitting, I think it looks like fun. And so glad to see that women were fairly well represented after all!

Hilarious read! You were my sunday best read!
It confirmed my belief that men and women are indeed from different planets (except for the odd number like that leggy blonde)

OMG! I'm disgusted but intrigued. I want to be there, but I'm afraid. Brooklyn Beefsteak is carnivorous indulgence void of any refinement, and it looks like an amazing event! I am surprised that no one had use for the casket company afterward.

I too am laughing too much to type. What a fun read. The apron is a sure sign that you survived. I can almost smell the meat grilling from here.

I wish I could have been a fly on the wall to experience all of the fun. Thanks for taking us along. It was the next best thing to being a fly.
Sam

I find this beefy escapade quite amusing, T.W. You never cease to amaze me when you step out of your realm and seize the moment to the fullest. Diamond Jim would be proud, although, I have a feeling those stacks of bread would have been his.

I must ask, do you know those people in the group photo. The one just above the t-shirt winner's stack of bread? The guy with the glasses and gray shirt looks very familiar.

You have provoked me to make beef for dinner. Not something I do often these days. Thanks!!!

Too funny! too bad y'all couldn't wear To-GAHs. Carnivores unite.
While I love my veggies, I love my red meat. Is it meatless for the next week or so?

This is my dream day, come to life! It's not quite 9am, but the site of that meat looks like a perfect breakfast to me! I'm just shocked and, frankly, disappointed that I was unaware of this event! Looks like you had a blast.

what a meatfest to rival all....

Thank you for sharing this incredible story with us. You write as well as you cook and I've just had a vicariously wonderful time. I'll be laughing each time I remember this today. Oh, was the meat good or was it an "in the zone" experience?

my husband would love this place!

congrats on your nomination

This is great!
I have never heard of the Brooklyn Beefsteak! and I see some women in the crowd! I want to come next time!

You want sorbet?
That line made my day!
LL

I love this and had no idea that the tradition had been revived. Must look into this place... thanks for the great post..a story well told!

I personally wouldn't mind if I was banned from the beef dinner. Way too much beef and testosterone for this girl. However, I'd love to chat over an old-fashioned and a lemon drop with you and Ford (only if he wears his Mad Men suit.) :)