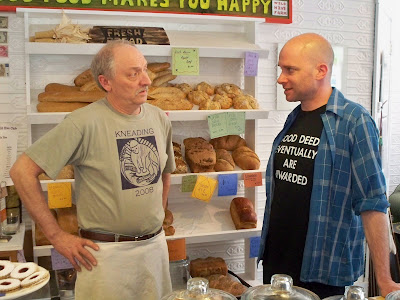 New York’s Hudson Valley region has a deep legacy of agriculture, legends and storytellers. In 1819 author and essayist Washington Irving published The Sketch Book which includes “The Legend of Sleepy Hollow and “Rip Van Winkle.” Irving used descriptive prose, humor and satire to depict the people and customs of the lower Hudson Valley and Catskill Mountains. For the better part of this past winter, food writer and editor Eric Steinman has been preparing to join this tradition. In just a matter of days, the inaugural issue of his new magazine, Edible Hudson Valley is set to debut.

We meet at the Wild Hive Café in Clinton Corners, New York to talk about the undertaking. The café and bakery sits at the cross roads of the tiny village. There is lazy jazz music playing on the stereo and the aroma of freshly baked bread fills the room.

Steinman – who has worked for Bon Appetit and various online properties – speaks with the thoughtful candor and clarity of a writer who is quite comfortable using language to persuade and illuminate. The food of the Hudson Valley region is fertile ground for the Rhinebeck resident’s method of storytelling, but he found as editor he needed to evolve his standard approach of writing food stories with a very singular focus.

“I felt like I had to step back and look at the task at hand,” he tells me. “What I came up with were multiple, interlocking narratives – all of those telling a story about the region, and having to do with history, sociology, immigration patterns, economics and politics and honestly, problems. Social problems and economic problems in the area.”

The nationwide Edible community of magazines originated with a publication in Ojai, California about eight years ago covering local food trends. Over time, individual communities expressed interest in customized versions of an Edible magazine that would depict their local food culture. Steinman learned more about the family of magazines when he wrote a story for Bon Appetit, and was eventually recruited to shepherd the development of a publication for the Hudson Valley.

There seems no limit to food lore in the Hudson Valley region. One can find abundant apples, sweet corn, dairy and livestock production. New York State is third behind California and Washington in wine and grape production with the Hudson Valley one of several major wine producing districts. It is also home to the Culinary Institute of America located in Hyde Park. Steinman is unearthing exceptional stories of individuals who are working to innovate, recreate and reform the local food system. 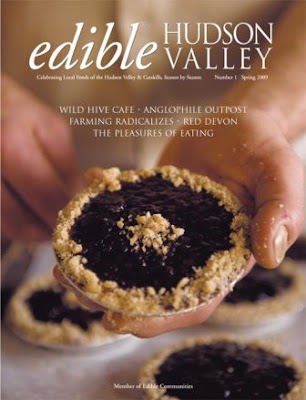 Amy – one of the staff at the Wild Hive Café – brings us a platter of just-baked, sliced whole grain breads and describes the selection – Walnut Multi-Grain, Onion Rye and Italian Toast accompanied by bean spread made from local beans, yogurt cheese and wild ramps and a sweet, golden carrot spread.
Steinman has chosen the Wild Hive Café for our meeting because the enterprise is illustrative of many of the food trends emerging in the Hudson Valley. He features Wild Hive Café in the first issue of the magazine. All of the grains used in the bread are from local organic farms and are milled on the premises. The owner, Don Lewis, began the business as an apiary in 1982, and over time became committed to reviving the cultivation of local grain in the Hudson Valley. The shelves of the store are stocked with rustic loaves of artisanal bread and plump packages of just-milled wheat flour, corn meal, oats and other grain varieties. The grain is 100 percent local, grown just a few miles away from the café which opened onsite last November. Lewis’s business model is a radical change from traditional thinking where grain is traded as a commodity, shipped long distances and can often sit for long periods of time. 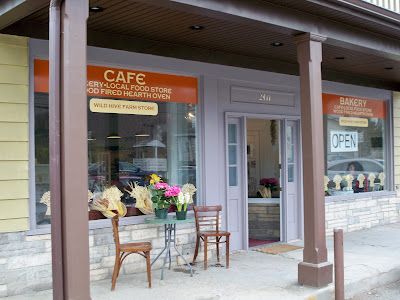 Exterior of Wild Hive Bakery and Café in Clinton Corners, New York.
“Don’s whole approach is, do not treat grain like a commodity - treat it like you would a fresh stalk of broccoli, or a plum and get it harvested and milled and used as soon as possible,” says Steinman. “His whole idea is to reframe how we think about grain, as essentially a fresh ingredient, which I think in itself is pretty revolutionary.”

As Steinman looked at the story of the Wild Hive Café, he wondered what the future might look like for the operation and what it might mean to the national discourse on sustainable food.
“It’s very inspiring what he’s doing, but I also looked at it as, well, how far can he take it? That was my initial interest in approaching the story. Okay, he could probably take this pretty far at the local level, but where does this go on the macro level? Can this model be sustained on a larger level, which is a question I think a lot of people are asking with our national food system and even our international food system.” 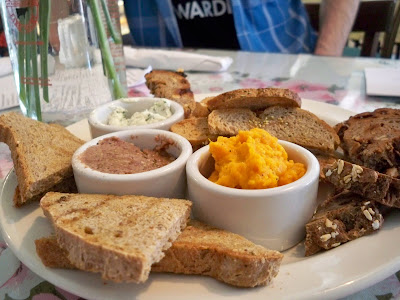 A sampling of breads baked from local organic grains available at the Wild Hive Bakery and Café.

The question of the viability of local food systems is one that seems to intrigue Steinman. He plans to revisit stories over time, and by doing so, view the region from a more holistic, long-term perspective. He intends to embrace difficult stories, and even report on failures, as all will educate and inform. It is a fundamental departure from the approach of a traditional food magazine.

“When a lot of people think about food and lifestyle magazines, they think about these sort of unyielding celebrations like, “Isn’t this an awesome plate of food!” he says. “But there are also other stories involved like, how did the plate of food become awesome, what are the problems in actually producing the food and distributing it, who has access to it and who doesn’t? My intention is to slowly unravel those stories and make them very unique to the region.”

He acknowledges that the very essence of food writing is undergoing a transformation.

While Edible Hudson Valley may take a different path, there are certain aspects of food journalism that Steinman will embrace.

“There is something elegant and austere about the magazine,” he says. “There will be continuity with the rest of the Edible publications, emphasizing photography, artwork and letting pictures tell the story. But the written word is the intellect of the magazine.”

Steinman has ideas for many stories to explore. He wants to examine the relationship between the arts and food and look at children and their relationship to food. He hopes to look at local history, generational stories, foraging and root cellars, but also take a critical look at the state of institutional food in the region, from the school system to correctional facilities.

“I think there is inherent value in storytelling, because it raises the consciousness as well as celebrates what’s happening, but it also poses questions,” he says. “This is going to be in part a celebration of the region, but I’m going to endeavor to ask hard questions, that I probably won’t be able to answer about food systems and distribution and justice and whether things actually work, and who these food systems serve and who they don’t.”

Right now, the California native is focused on bringing the first issue of Edible Hudson Valley to the community. He tells me that his understanding and appreciation of the region has grown deeper with the varied seasons since he and his wife first arrived in New York three years ago. He cites the “new beginning” of spring as a fitting time to introduce this new magazine into the communal history of the valley.

“Upon coming here, it seemed like there wasn’t much going on, but it’s ever evolving,” he says. “It started taking on this form and life of a story, and my role is to try to tell that story, not just by myself, but to use photographers and artists and writers and compile it or curate it in a way to really make sense of it.”

In a way, Steinman sounds a bit like the people of the Hudson Valley community he is reporting on. For now, his role is to cultivate and nurture these interlocking narratives – this collective local story – and see how it grows. But, that could change over time.

“Right now I’m very focused on getting the magazine out, getting writers and getting stories and really contributing something to the local conversation,” Steinman says. “But, I don’t necessarily want it to stop there. If it evolves in such a way, and there’s a need there, I would totally be willing to step up and become more of an advocate and more of a voice. I come from a long line of activists. There’s part of that that’s just in my DNA.”

The Hudson Valley is lucky to have Eric's eloquent voice and vision to guide their very own Edible. Thanks for a lovely piece that makes me want to subscribe to a magazine about a place 200 miles away. And good luck to Eric in this new adventure.

Fantastic to have the Hudson valleyhave it's own edible. That region certainly can boast of its local food trend identity. I wonder if he would cover Hudson Valley foie gras any time soon as foie gras is a touchy subject.

I've never been to the Hudson Valley but now I'm ready to pack my bags and go just to get a couple of loaves of that gorgeous bread. Thanks you for taking us along - this has been fun and educational.
Sam

A fascinating post. Linking community, farming and food in the way Eric plans brings further depth to the value of local produce. I hope the venture is a huge success.
Separately, I like the thought that grains can have their own special identity, and not just be a massive, undifferentiated commodity.

What a great post! Eric sounds absolutely great. Yay for the Hudson Valley!

Hi TW. Looks like a wonderful book taken from my region. I'll have to check it out!
xox

That plate of bread, YUM!

I can't help but think of Antiques Roadshow after reading this blog. The excitement of learning the provenance of a piece of furniture or crafted keepsake sparked an entire generation to seek the story behind the object. I'm thrilled to see consumers gravitating to these rich, fascinating and educational stories behind the food on our plates.

Whew! I'm back. What a journey I went on exploring all those Edible Community Magazines. Thank you so much for linking that wonderful resource, T.W.

For some reason, when someone mentions the Hudson Valley, I always think of wine. How enlightening to discover there's so much more! I too want to now subscribe to a magazine (actually all of them:) that explores the historic journey of such a fertile region.

GREAT review T.W. thanks for sharing...

Oh, thank you for the wonderful bit of information.I am going to this place~and you know I will! You must have had a great visit and tons of great breads to try...hope it goes well for Mr. Eric!

Very interesting.
Best wishes for success with his project to Mr. Steinman.
LL

The Hudson Valley is so beautiful that I can't imagine it not having a culinary aspect with all of the bountiful farms in the area.

Good luck to Eric and thanks for sharing this adventure!

This posts makes me want to explore the Hudson Valley. Thanks for sharing this treasure with me, TW.