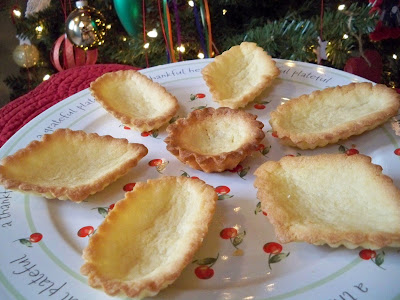 The Barritt’s are not from Scandinavia, although there are a couple of fair-haired blondes in the group. Regardless, every Christmas, we always looked forward to Nana’s signature treat, “sandbakkels,” a crumbly Norwegian almond cookie baked in delicate fluted tins.

Nana’s ancestral roots were primarily German. So how did she end up known, among other things, for a Scandinavian Christmas cookie? Ruth Barritt (pictured below, a little before my time) was a bit of a recipe hoarder (could we surmise that this is a genetic trait?), and when she tasted something she liked, she usually made a point of getting the recipe and trying it herself. 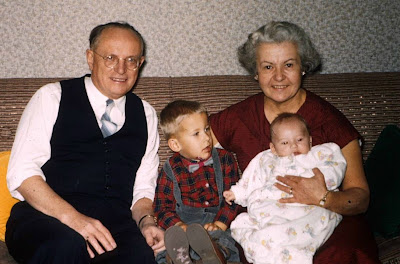 Perhaps she had a friend who was Norwegian who passed along the recipe, or maybe the fluted tins were a gift? Did she find the recipe in the newspaper or a magazine? I think she probably appreciated the ease of the recipe, and the delicate results produced by the gleaming little cookie tins. 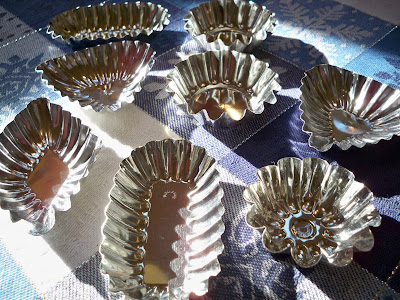 We’ll probably never know exactly how sandbakkels became a family tradition, but although Nana’s been gone for a number of years, we still remember her enormous, affectionate hug, her snowy white hair, and her plate of “sandy" and buttery almond-flavored sandbakkels, particularly at Christmas.

My brother Jim has kept up the practice at Christmastime, but I’d never made sandbakkels until now, and didn’t honestly know if they really had any direct association with the Christmas season beyond our family memories. I did a little investigating and turned up the book “Keeping Christmas” by Kathleen Stokker, which looks at Norwegian Christmas folk traditions and their evolution in the United States. Stokker mentions a seminal Norwegian cookbook, written by a minister’s wife named Hanna Winsnes in 1845, where recipes for sandbakkels and other traditional Norwegian cookies can be found.

Sandbakkels were one of many cookies prepared during the Advent season. Norwegians would serve cookies with a glass of wine at midday or with after-dinner coffee. Stokker notes that cookies such as sandbakkels became popular among the professional class around the time the Winsnes book was published, and were adopted by the peasant class much later in the 19th century. The Winsnes book was hugely popular and carried by Norwegian immigrants to the United States where many of these baking traditions took root, as the sandbakkel tradition did in Nana’s kitchen in Laurelton, New York. And, in that same tradition of passing good recipes along, I offer her version here:

Cream the sugar and butter. Add egg, flavoring and flour. Pinch off small pieces of dough about the size of a walnut. Press them into the center of a sandbakkel tin, and press thinly and evenly into sides and bottom. 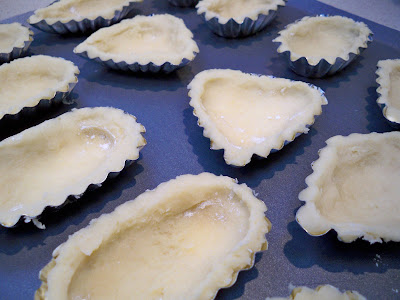 Put the tins on a cookie sheet and bake in a preheated 375 degree oven for about 12 minutes or longer. 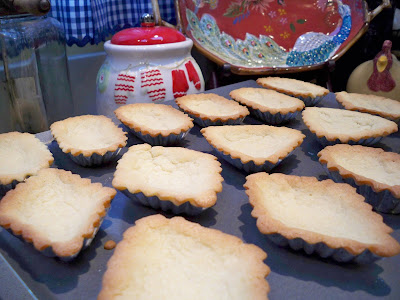 When cooled, tap gently on the bottoms of the tins and the tarts will drop out easily. (Caution – cookies are very fragile, so remove them carefully)

I’m submitting Nana’s Sandbakkels to “Eat Christmas Cookies – Season Two” the annual, worldwide cookie swap hosted by Susan at Food Blogga. You can check out the details here, and check out the selection of cookies from around the world here.

I inherited some of these tins from somewhere, but I never knew exactly what to do with them. And now, thanks to you and your Nana, I know. I wonder if I can do as nice a job of pressing the dough into the tins as you have.

Isn't that a piece of the Christmas tradition, Nana's cookies with a hint of mystery...

Lovely family T.W. The cookies look so delicate and serene. Thanks for sharing...

How pretty! I've seen those tins and wondered what they were for, and now I know. I would enjoy those filled with some kind of jam or curd. Yum.

Oh, how I love reading about Nanas and their recipes. This is such a lovely post, TW. I have never heard of Sandbakkels, but like your Speculaas cookies last year, they are quite memorable! Happy Holidays, my friend.

Do these cookies ever have a filling? They look like they're just waiting for something (chocolate, maybe?)!

hey uncle tom,
that's a nice picture of nana, i don't think i've ever seen that. i also don't think i've tried any of those cookies ever, although maybe i have and just didn't realize it. i'm going to use my intuition to assume thats uncle jimmy and my dad in that picture?
i'll see you in a few weeks (after my pleasant finals are all finished)!
-dave

They look very tasty, but I agree that they look like they want some filling. :)

Maryann - We always thought so!

Kathy -- keep a little flour on your fingertips. The dough has a lot of butter in it, so it can be sticky.

Andrea, Lydia and Rochelle - I don't remember Nana ever using a jam or filling specifically, but I do believe that my brother Jim may have topped a batch with jam a couple of years ago, and they were quite good!

Hi Dave - Your intuition is correct - that is indeed Uncle Jimmy and your Dad. I had not been born yet. Good luck on finals. I'll keep some sandbakkels in the freezer for you to try!

This cookie is new to me, and I must say, I am pleased to have made its acquaintance. I love the lore too. You know, they'd also be great for scooping up sweet fillings...like little chocolate-filled canoes or something!

That cookie is just waiting for some kind of filling. Great story about your Nana, T.W.

I remember these cookies from a friend's house when we were growing up. I have been looking for them ever since. Thank you for posting them!

I love sandbakkels. They remind me of my Norwegian grandmother! Thanks for posting this recipe and reminding me of a way to pass on her memory during the holidays.

This is very, very close to my mother-in-law's original recipe and they look just the same, right down to the same tin shapes. She got the recipe from her German born mother. We never put any filling in them either. Pressing the dough into the tins is extremely time consuming and it's frustrating to have them break when trying to gently dislodge them from the molds. I started rolling them into little balls and cook them that way, not as pretty but just as tasty.

We always made sandbakkels as I was growing up, and now I make them with my daughters. One tip: The photo you posted shows the sandbakkels thicker and browner than they "should be." The thinner you can make them, the more crisp and delicate they will be when they're done, which is preferred. They should be taken out of the oven before they turn brown at all. We NEVER put anything inside sandbakkels, and every time I've served them to those who don't know them over the years, people have wanted to put something in them. They are not like a regular tart shell. The almond flavoring makes them special, and they should be eaten just as they are. Thanks for sharing this tradition with others. :)

We always make these for Christmas and have a couple of different recepes handed down from Norwegian Immigrants. One of the recepes recommends filling them. We use berries such as lingonberry or black berry & also enjoy fresh (home made) whipped cream with a blackberry or rasberry on top. Regardless of whether or not you fill them they are delicious!

Yep, I agree with the post a couple up from me. In all the small town Norwegian recipe books, you will never see a sandbakkel recipe calling for some sort of filling. My Mom always baked these when I was growing up, they are just a delicate slightly almond flavored cookie, no filling.
And they were never browned on the edges at all.

Well, Nana would have done it much better than me, with no brown edges! :-)

Do I need to 'treat' or 'condition' new sandbakkel tins before I use them for the first time?
Thanks.

Mine were all well conditioned already, but I don't think there's anything you need to do - plenty of butterfat in the cookie, so they don't stick to the tins.

my swedish mother and grandmother filled sandbakkels with lingonberries topped off with whipped cream.

We use same recipe but 1/2 the flour, 2 egg yolks instead of a whole egg, flavor dough with almond and orange flower water. Fill with lignonberries, then dust with confectioner's sugar.

Also, we reverse them so you see the mold's pattern on top. The way you display them, we don't see the patterns at all. In other words, my family thinks your Sandbakkels are upside down!

My husband's family outs fresh whipped cream inside. I am struggling to find a set of tins of my own as the family heirloom set is scattered among my in-laws. Can you help with a company to order?

Mine are very old, but I checked online, and there seem to be many companies offering sets of tins. Here's the link to one: http://www.fjorn.com/fatamosetof3.html

I have not had these cookies since before my mom died (1974). I decided it was important for me to start creating the traditions of baking Swedish Christmas cookies with my little granddaughters. I could not find my mom’s receipe but lucky for me I found yours. .Thank you for sharing your Nana’s receipe.
P.S. we would also make fattigmons, krumbakklse and spritz....yum?