The King of Paella 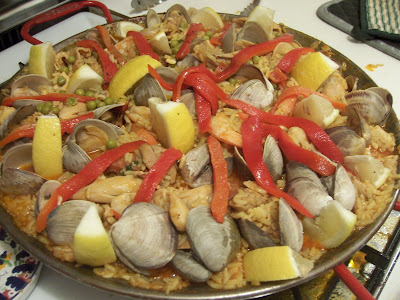 Recently, I heard a rumor that my friend Rocky claims to be a member of Spanish culinary royalty.

I first get the word from my colleague Hal2001, a creative thinker and epicurean. We are sampling Manchego and chorizo – with a side of red wine – at Despana Gourmet in Jackson Heights. I am admiring the gleaming paella pans perched high on a shelf.

“Rocky says he’s the King of Paella,” Hal2001 mentions. This surprises me, since I’ve always considered Rocky a serious meat and potatoes guy.

“Rocky told me. He was installing a light fixture in my apartment, and fell off the table and hit his head.”

“You believed the word of a man with a serious head injury?”

I am determined to investigate further and approach Rocky directly. I send an email.

“I hear you’re “The King of Paella.” You know how I feel about food. How could you keep this from me?” I demand.

The direct approach pays off, and scores me and Hal2001 a dinner invitation where Rocky promises to prove his prowess at paella. So we show up at the Upper West Side apartment of Rocky and his charming wife, with a bottle of fine Spanish sherry in hand.

Paella is a legendary Spanish dish of rice, chicken, vegetables and seafood, named for the pan in which it is prepared. It is often cooked over an open wood fire – although this is not acceptable behavior in a New York City apartment. Rocky has the ingredients spread on the kitchen counter. Chicken and spicy chorizo is simmering on the stove in the wide, shallow pan, and nearby there is a bowl-full of perfect clams and an open packet of succulent swordfish.

You can learn a lot about colleagues around the table that you’ll never discover at the office. I’ve always known that Rocky was a man of letters, but had no idea that he’d lived in Spain for four-and-a-half years as a youth and later bartended there as an adult. He claims to be a bit nervous with a celebrated food blogger scrutinizing his every step, but he moves with comfortable dexterity through the kitchen. Saffron colors the broth a burnished gold and the pan sizzles with savory and briny aromas evoking the earth and the sea.

It turns out the recipe is something of a family heirloom. During the time Rocky’s family lived in Spain, they often ate at a restaurant called La Puntaza in Mojacar and befriended the chef. One night at the restaurant in 1971, Rocky’s mom got up from table, went to the kitchen and learned how to cook paella from the chef. Take that, Julia Child! To this day, Rocky traditionally prepares the same paella recipe as part of their New Year’s Eve celebration.

Just before the feast of paella is ready, we encounter a slight snag. Hal2001 announces that he doesn’t like peas, just as Rocky is about to toss a handful into the pan.

“No peas, lima beans or sauerkraut,” states Hal2001 decisively. The sauerkraut issue is surprising for a guy who grew up in Pennsylvania Dutch country.

“Two out of three are not in this recipe,” says Rocky, but he agrees to a compromise. Only the right half of the pan will contain peas.

We fill our plates at the stove with the steaming and colorful concoction. Adorned with wedges of lemon and roasted pimiento, it is a brilliant and festive serving of Mediterranean splendor. Rocky agrees to share the recipe acquired so long ago on Mojacar. In a nod to modern technology, this time the recipe is passed along via Blackberry, but the venerated tradition remains intact. 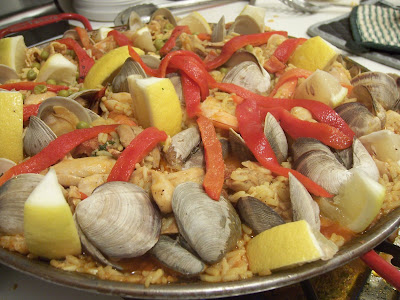 In paella pan: brown the partially precooked chicken and chorizo in olive oil along with the garlic for about 10 minutes.

Add rice, stir to more or less coat with oil and distribute evenly.

Add tomato sauce to the broth and add to the paella pan to the top. Continue cooking until liquid is almost absorbed, 15 to 20 minutes.

When liquid is almost absorbed, add shrimp and shellfish, pushing them down into the rice, until they open. (Shellfish can be precooked separately to remove bits of sand.) 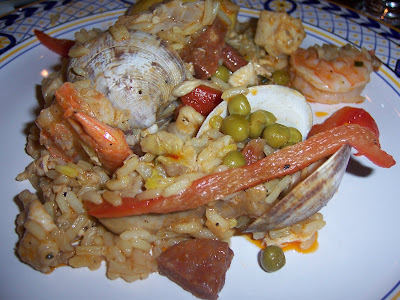 Paella, fit for a king and prepared by a culinary monarch. And, if you’re choosy about peas, remember, Rocky’s Paella is completely customizable.

All the best from sunny Madrid

Looks scrumptious and seems like it might be not be too difficult to prepare. I admit that I did have to go and see just exactly what a paella pan was. LOL on the peas on one side only.

My brother lived in Spain for a few years, and since then he had made paella a few times for our family, but I don't think he has quite mastered it in the same way. This version looks superb. (I'll have peas in mine please.)

This article is a masterpiece of storytelling. Long live the King of Paella. As we say in the casa, Rocky Rules!

“You believed the word of a man with a serious head injury?” God, I love that line, TW. I have not perfected paella yet, but perhaps with this recipe, one day I'll call myself "the queen of paella."

Love the "Paella Diaries" entry -- how fun that you got the invite to the chef's apartment. That is the ultimate ego boost for the culinary-oriented! This almost happened to me once but it was an invite for drinks, not private cooking. Just my luck...

Paella is spectacular, in the true sense of the word -- when you bring the pan to the table (and it's always served in the pan), it is a spectacle! I'm most partial to the crust that forms on the bottom, and when I achieve that in my own kitchen, I'm thrilled. How lucky you are to have the Paella King so close at hand!

Rocky was kind enough to share this recipe with me a while back and it was amazing. My grandmother would have been proud as I’ve never really been able to master her Paella Valencia; Rocky’s version was a lot simpler.

Rocky is an man of international intrigue and taste. If he evokes the same magic into his paella that he does on his guitar, that dish be rockin'.

There's only one way to really know if Rocky's recipe rocks...he'll just have have make us a panful and let us taste for ourselves. Surely the master-paella maker has left some ingredient or step out to ensure no one can top his peronsal Paella prowess.

I made Paella at a friend's place once. I'm telling you, this one looks better.

No one ever warned me about the need for the perfect paella pan the first time I made it some years ago. I haven't yet perfected it to my taste, which I sampled from a loving spanish mother of a friend, but I am set on accomplishing the endeavor one day so I will save this recipe until my saffron blooms in the spring. Yes, I'm growing saffron just to make paella. Look out Rocky!

what! I thought I commented on this already specially since I adore Paella. The paella makeer in our household is my brother-in-law who is puerto rican. I am so tempted to make this myself!

I'm pretty sure Rocky has honed his paella skills with the help of a Scottish beverage.....

His paella is out of this world.

Hi Tony! I am actually pretty good at Gambas!

Kathy - having watch Rocky, step by step, I can confirm that it's pretty easy.

Been There - so what should we conquer next?

Susan - You are already the "queen of the farmers market" so I'm looking forward to your next reign!

Jewels - I can imagine he's pretty good a drinks, too.

Lydia - I even got a care package to take home, so I was in heaven.

Nellie, Tate and Savannah - that Rocky is pretty generous with secret family recipes!

Moonbeam - I've had both experiences, but I'm partial to the way he rocks in the kitchen! :-)

DQ - Apparently, Rocky takes requests. You should ask him.

Helene - I have yet to try Paella, but I'm going to now.

Louise - I love saffron so much, I would probably do the same.

Veron - it's good to have paella royalty in the family. I'm probably going to be the designated guy here.

Anon - Yes - I do recall the Scottish beverage as well. He's a regular culinary globe trotter.

Oh, leave the peas in, Rocky!
This looks awesome, TW! You're lucky to have wonderful cooks as friends :)

I thought my dad was the King of Paella! We should organize a face-off. haha. I have to admit this is a very nice version. I haven't made one in a while and this post surely inspires me.

Hi Maryann - This was like a trip to Spain in midweek - and, yes, I'm very lucky to have some wonderful colleagues.

Hi Zen - this sounds like the makings of a new Food Network series - "The Battle of the Kings of Paella!" We could serve as executive producers!

What a gorgeous paella!

Now that is a paella fit for a king. Wonderful, and please send your friends my thanks for sharing the recipe. :-)