A Wine Who’s Time Has Come 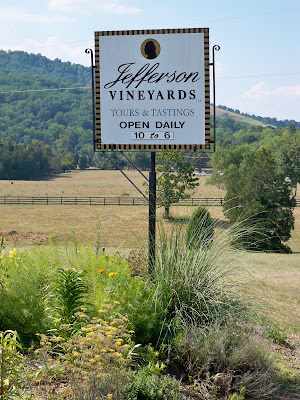 America’s third President, Thomas Jefferson was a connoisseur of good wine. He drank it every day, called it “indispensible” to his health and lived well into his eighties.

Thomas Jefferson was a man after my own heart.

Jefferson did much to accommodate this great love, including the creation of an extensive wine cellar at both his mountaintop home of Monticello and his secluded retreat at Poplar Forest in Virginia. 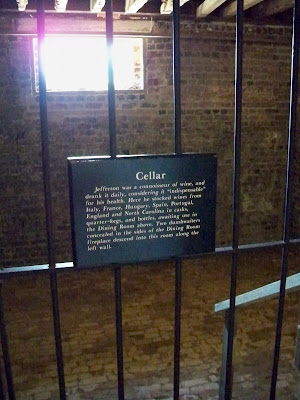 He imported wines from abroad, and closely studied European varietals. In 1774, he even tried to establish a vineyard at Monticello and hired a European vintner to oversee the grounds. The vineyard ultimately failed.

It took more than 200 years, but the winemakers at Jefferson Vineyards in Charlottesville, Virginia finally figured it out. Located on the same land where Jefferson attempted to establish that first vineyard, Jefferson Vineyards has been producing wine since 1981. History does, in fact, reward those who are patient.

I arrive at Jefferson Vineyards after a day of exploring at Monticello. Somehow, I can’t quite complete my picture of the man without a taste of the grapes that bear his name. I am entranced by the austere, smoky green wine bottles decorated with Jefferson’s spidery signature. The label is modeled after a 1787 bottle of Lafitte wine that was discovered in 1985 in a sealed Paris wine cellar and is engraved with the marks of Lafitte and Jefferson.

The Chardonnay Reserve is crisp and sublime and the Viognier has a spicy finish. The Bordeaux-style Meritage is a blend of Cabernet Franc, Merlot, Petit Verdot and Cabernet Sauvignon. It is reminiscent of the style of wine that Jefferson would have enjoyed during the early days of the new republic. Historic wine, celebrating an historic figure. It is perhaps a taste of the man and the land that was so much a part of his psyche.

To your good health, Mr. Jefferson! 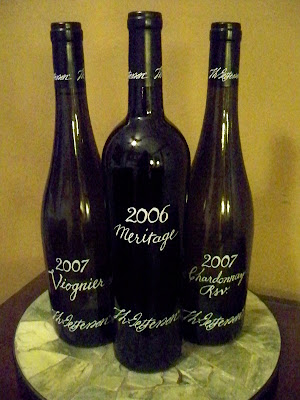 Recently I traveled through the Virginia countryside, discovering the local food, history and hospitality of what is called “the birthplace of the nation.” I visited Jefferson Vineyards on August 19, 2008.

If someone asked me what three people I'd want have at my dinner table, I'd have to put Jefferson on the list. Perhaps he was the first American foodie....

This is fascinating. A 1787 bottle of Chateau Lafitte? Probably undrinkable but a treasure anyway.

Oh T.W. it sounds like you had a glorious time exploring the Virginia countryside. "The Kitchen Garden" the wine...I'm in awe of your journey.

Lydia - better yet, I would have liked to have eaten at Jefferson's table. Imagine the meals at Monticello!

Hi Zen - just the fact that it had been saved for that long is amazing.

Hi Louise - food, history and wine converge in Virginia - it's my kind of place!

Our little wine country in Virginia. Glad you made the tour...Jefferson definitely left an indelible mark at Monticello. did you know he also designed some structures at the barboursville vineyard? The barboursville octagon wine was based on Jefferson's design of an octagonal room.

Veron, I wish I'd known this when I was there. I was quite near the Barborsville Ruins one day, but didn't know that Jefferson was connected. I did make a long drive (past Lynchburg) to Poplar Forest, where Jefferson did build a beautiful little octagon house.

That sounds like so much fun! I had never heard of these Jeffersonian wines! Sounds like something I need to try!

Jenn - check them out - great wines. Revolutionary, in fact!