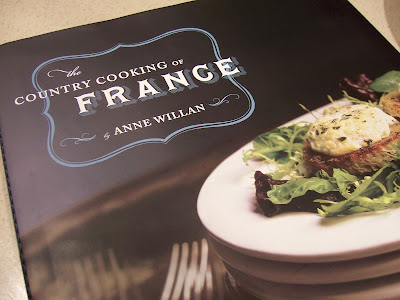 The directions say, “Walk straight ahead through the swimsuit department and take the first left.” I am at Macy’s Herald Square in New York City to experience the best of French country cooking at the De Gustibus Cooking School. But, it is also a sentimental reunion of sorts for me. The legendary author and culinary instructor Anne Willan is the host for the evening. She is the author of the recently published “The Country Cooking of France,” a stunningly beautiful volume that takes one on a tour of the ingredients and classic recipes of the key regions of France. Upon arrival, we are told that the book has just been recognized with a prestigious James Beard Award. Anne was also the instructor of the master classes during my time at La Varenne at Chateau du Fey in Burgundy, France in September 2006. That period was of those perfect moments in life, for the food, the wine, the new friends and the beautiful countryside.

I am excited to once again see Anne at work. Akin to culinary royalty, she is characteristically proper, enormously entertaining and very precise. Above the work area is a long mirror which reflects all the actions taking place on the counter below. It is said that Anne first came up with the mirror concept to allow classroom students to better view the work of the culinary instructor.

She is dressed in a crisp, gold-striped blouse and a neat red bib apron. Behind her is an historic map of France that illustrates the important food regions of the country, immortalized by the food writer Curnonsky. I saw the same map at Chateau du Fey. As she speaks in her correct British accent, her deep respect and love of superior local ingredients that evoke a sense of place is clearly evident. 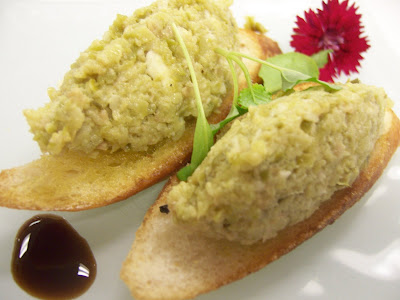 For an appetizer, we are served a sparkling wine and a green olive tapenade served on a toasted baguette. While we imbibe, Anne begins the preparation of a Gateau Breton aux Herbes du Pays (Butter Cake with Fresh Herbs) from Brittany. Chopped peppermint is incorporated into rich buttery dough that when baked, has the texture of shortbread or pound cake. She notes that most dough needs to be worked carefully, so as not to become tough, but Gateau Breton is very resilient. “I’m going to work the hell out of it,” she proclaims. Someone asks about the unusual addition of herbs to the sweet dough. “That’s new style,” replies Anne, “but it goes back at least 300 years.” She creates a lattice pattern ont the gateau with the tines of a fork. This distinctive pattern “says Gateau Breton.”

As her hands work methodically she talks about her life experiences. She was one of 200 women accepted to Cambridge in her day, and earned her masters degree in economics. She always loved working with her hands and quickly turned to cooking, training at the London Cordon Bleu. Later, in the United States, she became an associate editor of Gourmet Magazine and she founded the prestigious Ecole de Cuisine La Varenne in Paris in 1975. In between she penned dozens of books on cooking and food history. She and her family lived for many years at the gracious Chateau du Fey in Burgundy, but recently in a life transition, she and her husband have moved to California. “The Country Cooking of France” is a tribute to their years in France.

Someone asks how she went about researching the book.

“We ate!” is her spontaneous reply.

Anne moves on to prepare plump tomatoes stuffed with goat cheese, a favorite dish at Chateau du Fey. Meaty tomatoes are filled with soft goat cheese combined with fresh snipped herbs. The tomatoes are baked, “just until the skins begin to split.” 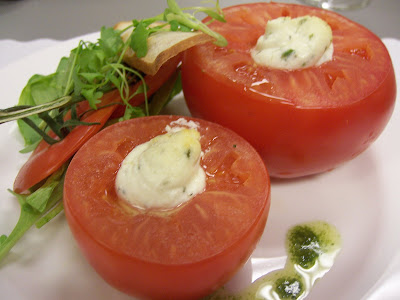 She moves to the entrée, a Magret de Carnard, Sauce Aillade (Duck Breast with Garlic and Walnut Sauce) a product of southwestern France. Aillade is a sauce of raw garlic, walnuts and walnut oil. The duck fat sizzles in the pan tempting our senses, and the sauce is nutty and pungent. Anne reminds us that the new garlic at the farmers market should be particularly sweet. 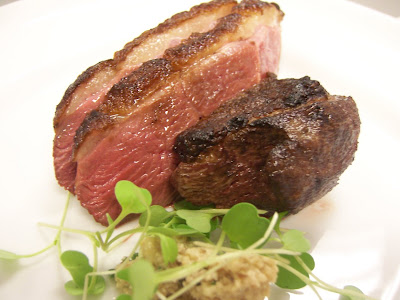 Next, she prepares a lovely gratin of bell peppers with rice. The rice sticks a bit in the casserole. “There’s nothing like a sprinkling of herbs for covering a disaster,” she advises. 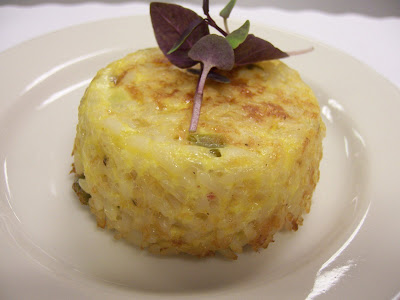 La Traffade is a savory Potato cake with Cheese and Bacon. This is an Alpine dish that is sometimes served to skiers. Ironically, New York City is currently in the grip of a vicious heat wave. “After braving the streets in 100 degree temperatures, we deserve this,” says Anne. It is served rustic-style on parchment paper. 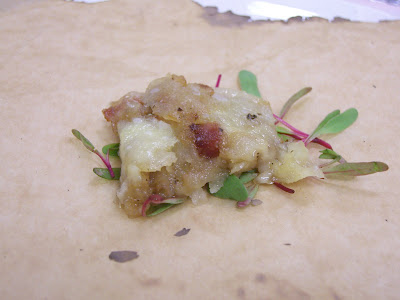 Finally, the finished Gateau Breton is served with a pureed sauce of strawberries and raspberries. The dense, golden, buttery tart and the sweet fruit is exquisite. 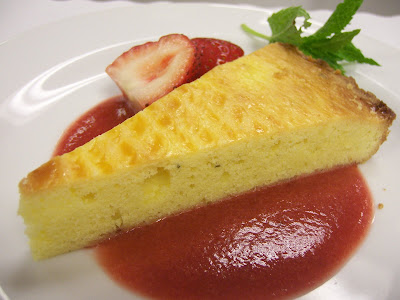 Anne is asked how long she took to write the book. “It took three years to write, but it’s really a lifetime,” she replies.

She invites the culinary team at De Gustibus to join her for a bow to the appreciative audience. She and I have a moment alone when I share photos of my visit to La Varenne. Anne gives me a warm hug and inscribes my copy of “The Country Cooking of France.”

Leaving the class, I am again more mindful of what Anne Willan calls food “with a sense of place, a sense of terroir.”

Settling in on the train destined for home, I open the book. The inscription reads: A small taste of France, Bon Appetite! Anne

I know that in the future when I cook from this book - no matter where I might be - that sense of place, or terroir, attached to the country cooking of France will also evoke fond memories of Anne Willan.

Email ThisBlogThis!Share to TwitterShare to FacebookShare to Pinterest
Labels: Anne Willan, Books on Food, Cooking Teachers, The Food of France

It's often true that when you see a chef do a demo in person, there is so much more passion evident than when you see them on television in what can be so heavily edited. My impression of Anne Willan from her TV shows was always uptight, snobby and clinical, and I'm so glad she is not really like that. Sounds like a wonderful class!

Oh,this has to be the most delicious food I've come across in a long time.Did it taste as good as it looks and sounds? Colette.

Yummy! I especially love the tomatoes and the potato cake! What a great little feast!

Hope those tomatoes were ok :)

You're one lucky man T.W!

Lydia - there's nothing like the real thing - I think she's a treasure!

Veron - get the book. You will absolutely LOVE it!

Colette - the colors and flavors were wonderful, and they did such a nice job of pairing the wines. There was a French Rose with the duck that was an unexpected and superb combination.

Jenn - they served the potato cake on parchment paper, which was particularly nice.

Stella - I am going to go back for more classes in the Fall - it's like having a wonderful 4 course meal with the chef providing color commentary.

T.W. - I really need to make the effort to take some of the cooking classes available in my area. You make them sound so interesting.

It's always so enlightening to armchair travel in your culinary footsteps.

Thank you so much for sharing your insightful passages.

I am awaiting YOUR cookbook. I know it would be wonderful. You write so well and have so much knowledge and experiences in cooking.

Kathy - I really enjoy the one night classes. You can gain a lot of knowledge and they are really fun.

Louise - I'm so happy to be of service, especially when the food is so tasty!

Maryann - Many thanks for your kind words! I do have to get working on that book ...

I love the quote “It took three years to write, but it’s really a lifetime,” --I totally respect that. It's true! It looks like a life's worth of labor and love went into it. I can't decide what looks most delicious!

I love Anne's response to how long it took her write the book. It sounds like a lifetime's worth of culinary treasures are in her book. Well TW, that's what I call a successful trip to the mall.

I think she lives in Los Angeles now. I read an interesting article about her in the LA Times back in Feb. How wonderful that you could take a class with her.

Hi Rochelle - I saw that article, too. I think it captured her quite well.

So glad I discovered such an interesting and entertaining blog!