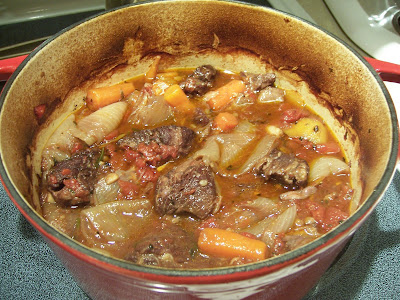 It doesn’t take a particularly logical train of thought to get me started on a new cooking project. But, it is often a complicated path. Here’s a typical chain of events: 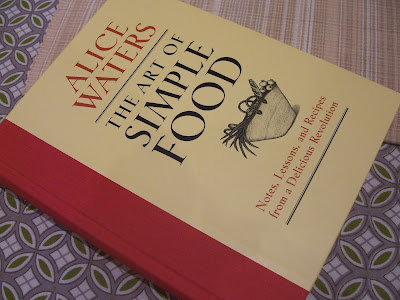 Along the way, I’ve hit a slight snag. The truth is, I’m a bit of a novice with Dutch ovens, and the optimal cooking techniques. Braise or stew? Which is it?

“The Elements of Cooking” by Michael Ruhlman offers some basics on braising. He calls it a “combination cooking method” of dry heat, in which meat is seared in very hot fat, followed by moist heat, where the meat is simmered in liquid at a very low temperature, but never a boil. Braising works well with cuts of meat that that contain connective tissue, which breaks down during the cooking process and thickens the sauce. Stew, on the other hand, is primarily the moist heat method, but the meat is cut into smaller pieces, a greater amount of liquid is used, and you don’t always sear the meat, although it will boost the flavor if you do. The Dutch oven is constructed of cast iron, so it conducts heat evenly and the tight-fitting lid keeps steam from escaping so the long, slow cooking method results in tender meat and luscious thick sauce.
There appears to be some controversy over techniques. Harold McGee is on record that the optimal braise starts at a temperature of 200 degrees F and is increased to 250 degrees F after two hours. Other’s suggest higher temperatures.

This is all becoming complicated, so I stick to Alice Waters’ directions. The beef stew recipe looks a bit like a cross between a braise and a stew. She recommends beef chuck because the connective tissue and fat offers more flavor.

First, bacon is browned in a pan. Then, the chunks of beef are browned in the bacon fat. 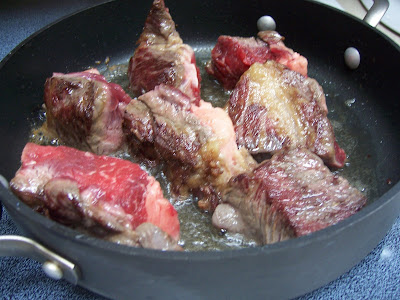 Aromatic vegetables – onions, carrots, and thyme, savory and parsley – are then browned just slightly before being added to the meat in the Dutch oven. The pan drippings are deglazed with brandy and the Bordeaux. Organic fire-roasted tomatoes, chopped garlic and beef stock are added to the pot along with the wine reduction. 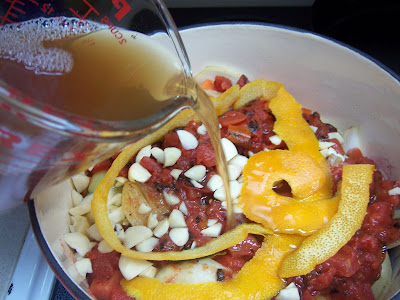 Essentially what I’ve done is layered one flavor on top of another. The mixture is topped with a long strip of orange zest. I particularly like the fact that I can cover the pot and place it untouched and unattended in a 325 degree F oven for three hours. 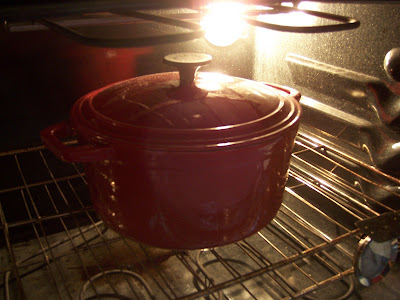 The method is sheer simplicity, and the aroma is sheer torture. I keep glancing at the clock to see how soon it is until dinner. The house is fragrant with savory meat, rich wine, herbs, garlic and citrus. I’m about to loose my mind, and my appetite is on a rampage.

Time is up, and I open the lid. The odyssey of braising, stews and a lip-stick red Dutch oven in search of a home is complete. Simple, however, is a misnomer. 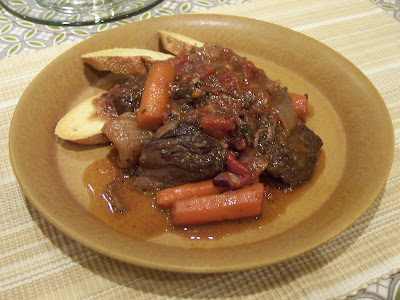 The mahogany sauce looks like satin, and the onions have practically melted. The beef is succulent and smoky, the carrots tender, and the orange zest adds a sweet, fresh note. The stew … uh, braise … is served atop toasted bread rubbed with garlic. Who needs fussy, complicated cuisine?

The best part is the leftovers. I can almost bet the beef stew will taste even better tomorrow, and I won’t have to cook for several days.

What could be simpler?

Congratulations on your new Dutch oven! You'll wonder now how you ever lived without one. Not only is it great for stews, but you can join the ranks of the no-knead bread fanatics who've discovered yet another great use for these heavy-duty pots. I've got the Alice Waters cookbook sitting in my pile of new arrivals. Now I can't wait to work my way through it.

We must have had the same idea this weekend as I made a pot roast yesterday. I used the all-clad but I'm sure the cast iron ones are better. I braise at 300 F based on a cooks illustrated study a few years ago. I do kepp Harold McGee's recommendations at the back of my mind though :).

That looks fantastic, and not to over state the obvious but browning any thing in bacon fat is the way to go!

The addition of the orange zest is so inspired. I've never thought to do it, but I certainly will now. Thanks, T.W.!

Hi TW!
Oh yes, the stew is always better the next day. I made beef stew this weekend also. Love it! Love yours!Looks as good as any beef stew I've ever seen :)

Lydia, I'd forgotten about the no-knead bread! Now you've got me started on next weekend's project!

Kathy - I thought the beef tasted great - flavor is worth the extra money.

Veron - At some point, I plan to test McGee's recommendations just to see the results. Will you be posting on your pot roast?

Susan - I went slightly overboard and "zested" the whole orange, but I thought the flavor was so fresh, and a nice contrast to the richness of the beef and wine.

Maryann - I can now confirm that the stew was even better the next day!

I've made that pot roast before on my blog, it was one of my earlier posts...

That looks great. I love my 'Le Creuset'. Anything is good in it.

Hi Helene - welcome and thanks for visiting! I have continued to experiment and recently made a wonderful dish of braised chicken thighs with honey and almonds - delicious and so easy!