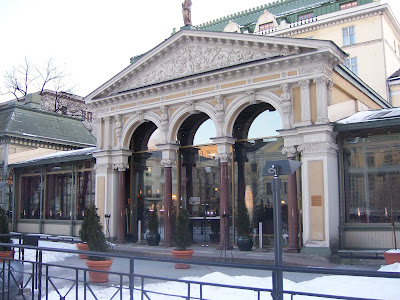 It is numbingly cold in Helsinki -- the kind of cold where all your joints feel distressingly fragile. Yes, I do manage to get around -- one man, one carry-on suitcase, a suped-up laptop and a Ziploc bag full of toiletries. One day I can be eating homemade ice cream in suburban Long Island, and the next day I’m freezing my buns off in Nordic country. Fortunately for me, it is “Blini Season” in Finland.
The restaurant Kappeli is located in Helsinki on the Esplanade, a strip of park currently coated with a layer of ice that runs along a main avenue in the historic section of the city. The sun has long since disappeared, and my colleague and I brave the 10 minute walk from the hotel in subzero temperatures for a bite of supper.

Kappeli means “chapel” and the restaurant was built in the 1860s on the site of an outdoor market where a herdsman would sell cows milk in a little decorated stall that was referred to as a “chapel,” and the herdsman called a “pastor,” or shepherd.
Kappeli is an enchanting crystal pavilion on the edge of the park that glistens in the evening twilight. Neo-classic statues and scroll work adorn the outer peak. Inside, the restaurant is warm and inviting with the open appearance of a baroque sculpture garden. We are seated by a window that overlooks the icy park and handed a special blini menu that celebrates the long season of winter. Our waiter, Eero politely answers my numerous questions about the food, even retreating to the kitchen to check certain facts and provide me with as much detail as possible about the menu and ingredients.

We start with Burbot Soup, a dish I’ve not come across before. Eero tells us that burbot is a firm white fish, a “bottom feeder” like catfish that thrives in icy temperatures. It’s been an atypically warm winter in Helsinki (hard to believe), and the supply of burbot has been limited so we are lucky that the restaurant has gotten some in. The steaming soup is an elixir on this frigid night with chunks of smoky fish, potatoes and fresh dill in golden broth, with a touch of richness from butter. The intoxicating aroma of dill is apparent as the soup bowl is placed on the table. As an accompaniment, Eero passes a large basket of exquisite breads from Finland – tangy brown bread the color of molasses and soft, chewy rye dotted with caraway seeds.

Blinis are of Russian origin and are hearty, disk-shaped russet-colored pancakes made from three flours – wheat flour, rye flour and buckwheat flour. The batter is mixed with beer, rests for many hours and then is fried. At Kappeli, the fragrant six-inch pancake is brought straight from the stove to the table in a small cast iron skillet and served with condiments and perfectly-shaped quenelles of various savory toppings like sour cream, whitefish roe, mushroom salad, herring caviar, crayfish tartar, chopped onion and smoked reindeer tartar.

For dessert, I tackle a stack of thin tender caramelized blinis layered with cream and cloudberries, a thick, translucent, amber jam that is pucker tart. Body and soul fortified, we must then bundle up and head back into the frozen midwinter night.

Email ThisBlogThis!Share to TwitterShare to FacebookShare to Pinterest
Labels: Comfort Food, Food on the Road

Thanks for sharing this wonderful post. Despite the frigid temp, you make it sound divine. Wishing you safe travels!

oh what an exciting place to visit! Take lots of pictures to share!

I've never had blinis , I've only seen them in pictures and I like what I see. Looks like you had a sumptous dinner!