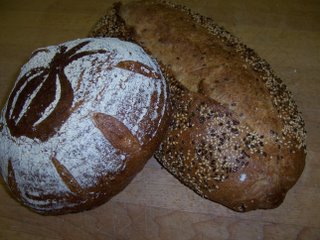 Diary of A Mad Bread Baker – Week One: To say we are busting our buns would be an understatement.

I’d had this vision of lovingly hand-kneading my own personal loaf of artisan bread each day, watching it rise in the oven, caressing the crisp golden crust and transporting home my labor of love to eat and share with friends.

The reality is this. We’re in bread boot camp. We’re a baguette assembly line. In a mere five days, we’ve shaped, rolled scored and baked hundreds of loaves, and there are still 15 class sessions to go. We have a morning lecture, and then we dive into a mixing and pre-shaping endurance marathon. The afternoon is spent lining up raw loaves on loaders, scoring them so they don't explode and lifting and sliding them into the dark, cavernous ovens which I’ve fondly knick-named “Jaws.” It is incredibly physically and mentally demanding. Lose your concentration and the ingredients are off, the dough is brutalized or you burn a patch of skin or throw out your back.

But, despite the intensity and the overwhelmingly addictive aroma of yeast, certain things are becoming clear through the haze of King Arthur flour dust:

As for my two fellow “Bread Musketeers?” "A" is like a sponge, no pun intended. She takes copious notes and asks really smart questions. She has an admirably adroit technique with the dough, and never seems to lose her focus or her optimism. "E" is still mangling the dough. He has yet to develop that light touch and gets involved in too many distracting side conversations. Some of his pre-shapes have looked like deflated beach balls, but then he will have a brilliant insight about a mathematical formula or measurement. On Friday, he caught me in the nick of time before I began to weigh out three times the amount of flour needed for a large batch, since I chronically confuse grams and kilograms. Clearly his core strengths lie on the numbers side of baking (and mine don’t). But he’s a sweet, considerate guy and a team player.

I am in awe of Chef. She serves up science, technique and philosophy in equal doses and observes our actions like a hawk, gently advising and correcting each misstep.

On Monday, we meet the “Maitre Boulanger” of the Institute for the first time.

Posted by T.W. Barritt at Culinary Types at 8:49 AM

I completely agree, bread IS a living thing. Working with dough is one of my favorite things in the world, it's so theraputic and deeply satisfying. Your loaves look fantastic!

Thanks for reading! So far, they have tasted as good as they look, and I'm getting better each day. What's so much fun is all the diffent styles and their history.