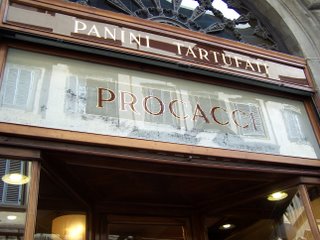 The Cappella dei Principi is the mausoleum for the Medici family of Florence. Much of it is now supported with scaffolding, because the polished blue, green and gold marble had begun to fall from the walls. I accept the potential risk of a head injury and make a morning visit to the site, which is regal even with the scaffolding. Again, Florence’s finest Michelangelo is present with several sculptures that decorate the stone caskets of the family.

At 10:00 a.m., I am back at Apicius, the Culinary Institute of Florence, and meet Massimo Coppetti, my guide for a gastronomic walking tour of the city. Among other things, Massimo is the wine expert at the institute. He is about my height, with dark hair and an olive complexion. He was born in Florence some 40 years ago and for a time operated several restaurants before devoting himself full-time to culinary teaching. He learned to cook out of necessity, because his mother worked as an elementary school teacher.

We head out onto Guelfa, and Massimo starts with a brief overview of the Italian kitchen, reminding me that the cuisine is comprised of three distinct regions, North, Central and South and the Islands. He explains that each of these regions was also influenced by the ingredients of the area, the weather of the region and the countries closest to them, resulting in a number of distinct dishes and variations.

We make a brief stop at Mercato Centrale, the major food market of Florence, where I sample three regions of olive oil all noticeably different in flavor. I taste different cheeses, and we pause at the tripe vendor where Massimo outlines the different selections of Tuscan tripe and entrails that are sometimes served in panini. I take a pass on the tripe.

Next, we head towards the historic center of the city, and Massimo discusses how coffee and wine are extremely important elements of the Italian culture. We visit Caffe Giacosa where shiny attractive people are lined up at the bar to order coffee. Massimo and I order Completo Marocchino, or Moroccan coffee, made with chocolate syrup and served in a shapely glass tumbler (I learn that Italians are loathe to drink coffee out of a paper cup). Massimo explains that coffee and wine are similar in that you need to taste them for their distinctive flavors and essences.

In the different establishments and on the street Massimo sees different people he knows and greets them warmly. As we walk, he talks about how important it is to preserve the heritage of the Italian kitchen. At times, he wishes the country would provide more support. He sees himself as a culinary ambassador as he travels to different countries promoting the work of Apicius.

The next stop is Cantinetta dei Varrazzano where I bite into a large slice of salt-less Tuscan bread called Schiacciata, but known as Focaccia in other parts. It is dimpled, golden and tangy. In several shops he points to a seasonal variety of Tuscan bread studded with wine grapes and only available during the autumn harvest.

We continue along the streets of Florence and Massimo tells me how much he enjoys cooking with his wife. “It’s good for the marriage,” he says.

We visit a wine store where he outlines the four appellations established in Italy and explains the origin of super Tuscan wine. Then, he takes me to an establishment close to his heart, Procacci, established in 1885. It is all polished wood, marble floors and charming café tables. Procacci is a Florence-style delicatessen famous for its aperitivo – a glass of prosecco and a finger sandwich filled with truffle cream. Massimo orders me semi-dry bubbly prosecco which tastes of peach and the finger sandwich which he says is a secret recipe. He then tells me that he had his first aperitivo at age 15 with his father at Procacci. “I love this place,” he says.

The bell tower of the Duomo is heralding the noon hour as we approach our final destination, Gelateria Grom. There, he buys me three different kinds of gelato in a cup – fig, because it is in season, pistachio and something packed with bits of chocolate and biscuit, which is probably the Italian version of cookies and cream, but tastes far superior.

In two hours, he has done his work as an ambassador, and must hurry to an afternoon class. I am richer for it. We shake hands, and Massimo vanishes into the crowd of tourists.

In the afternoon, I cross the Arno River via the Ponte Vecchio and hike high up into the hills for expansive views of the old city wall and the domes and bell towers of Florence. I visit San Miniato al Monte, a Romanesque church build in 1018 that is reached by climbing hundreds of stone steps. It is dark, cool, and silent, and the crypt beneath the altar has a mysterious, age-old ambiance.

Returning to the city, I stop at the Museo di Storia della Scienza, where Galileo’s telescopes are kept, and have an early supper at Rititrare on Piazza della Signoria of ravioli stuffed with spinach and a dessert called a Fedora which is a bit like a chocolate beret filled with whipped cream.

Email ThisBlogThis!Share to TwitterShare to FacebookShare to Pinterest
Labels: Apicius The Culinary Institute of Florence