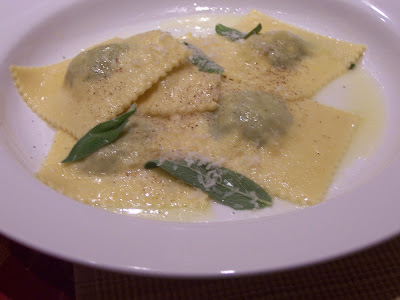 I admit it. I’m a Chef Boyardee baby.

Growing up on suburban Long Island, I just assumed that ravioli came from a can. There were exactly two varieties, which in the 1970s was considered an embarrassment of riches – meat ravioli and cheese ravioli, each covered in a clingy red sauce. The main kitchen tools required for preparation were a sturdy pot, a cover and a can opener.

My palate, my kitchen skills and my culinary wisdom have grown incrementally in the years since.

If only I knew then, what I know now. In 2006, I stood next to a no-nonsense Italian grandmother in Bologna and rolled pasta by hand. In the historic food markets, shop windows were abundant with rows of plump golden pillows of pasta. In Florence, under the tutelage of Chef Roberto, I fed translucent sheets of dough through a pasta machine, prepared egg tagliatelle, cut ravioli by hand, and dressed the dish in melted butter and aromatic sage. Those weeks inspired an “awakening of the senses,” as a culinary icon once said.

Chef Roberto made me promise that I wouldn’t just relegate the pasta-making experience to my European culinary adventure. “You must do this at home,” he urged.

I made good on the promise. I bought an Atlas Pasta Machine and I’ve served up many a platter of tagliatelle. But, I must confess I’ve been a bit of a ravioli procrastinator. No more. It is a frigid February weekend – too cold to go out – so there’s plenty of time to ramble around the kitchen. Ravioli is a time-intensive exercise. The afternoon experiment clocks in at roughly four-and-a-half hours. The spinach must be washed and cooked, and mountains of leafy greens are eventually reduced to about four cups of puree. My kneading hand is a little rusty, but I work the semolina flour and eggs into pliable, shiny dough. Carefully, I spoon the filling onto sheets of pasta and tuck them in. 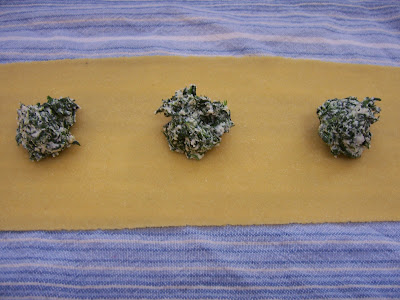 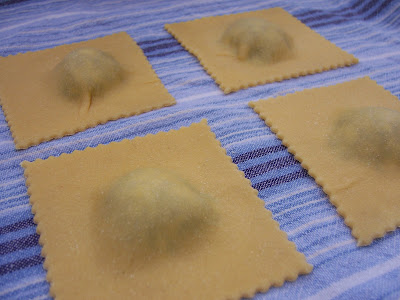 While the ravioli is resting on the counter, I do a little page-turning through my new favorite reference book, The Oxford Companion to Italian Food by Gillian Riley. There I learn that stuffed pasta, as it is generally referred, is made in distinctive, traditional shapes, depending on the region in Italy, and that stuffed pasta was considered a gastronomic luxury of the upper-class in the Middle Ages and Renaissance periods, but eventually became a popular food of the middle-class. Mixtures of fresh spinach, ricotta and herbs are traditional fillings for stuffed pasta in Parma and Modena. 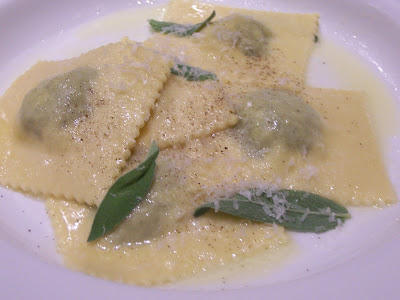 The sun has gone down as I melt butter and slip the pasta pockets into simmering water. The results are pleasing, but the delicate simplicity of the meal does not adequately reflect the labor of the effort. Homemade ravioli is a physical and mental investment. It is hard work, but there is intense satisfaction in preparing a hand-crafted meal. And, the best part is there’s a healthy supply of ravioli now tucked away in the freezer for future quick-cook dinners.

It was time to give my can opener a rest, anyway.

T.W., what a delicious pasta dish! It reminds me that it was almost a year ago the first and last time I made ravioli at home... Time to make them again!

Looks good, T.W. I haven't ever even tried to make ravioli. I do like to buy it freshly made when I can find it though.

oh, oh, oh! This stopped me flat in my reader and I had to come over right away to say how beautiful these look :)

Fantabulous job, T.W. those ravioli look so delectable. I have never made that type of pasta before by hand. You have so inspired me.

Mouthwatering! Almost makes me want to rescue my pasta machine from the basement and make some ravioli. I'm not a Chef Boyardee girl, but I'm a bit lazy about pasta, and living in the most Italian state in the US, I can get wonderful homemade pasta on Federal Hill in Providence.

Looks like Chef Boyardee has grown up! :-) Don't tell the cake but I am saving an appetite for this!

Hi Patricia -I'd love to see what you make!

Kathy - It's quite an experience, but you remind me that there is a fresh pasta store not far from me.

Maryann - coming from you, I consider that a great compliment! You set the standard for great Italian food!

Thanks, Veron - wouldn't it be fun to experiment with differnt types of fillings and sauces?

Hi Helene - it really is worth the effort, but plan to spend a bit of time!

Hi Lydia - I'm a bit time challenged, most of the time. Does Federal Hill send takeout to Long Island?

Hi Cakespy - Yes, Chef Boyardee is grown up and on his own! Your secret is safe with me!

T.W. your ravioli look simply perfect! They reminded me exactly of the ones my mom made when I was little--I grew up in Italy. Butter and sage in my opinion is the best sauce for these ravioli: flavorful yet delicate.

Manuela - thank you SO much! That means a lot to me, coming from someone who grew up in Italy! You've encouraged me to try again!

Jessy and her dog Winnie said...

Terrific photographs to inspire everyone to make home made pasta. The Sage is awesome!

Jesse - thanks so much for visiting.

White on Rice - Sage is probably one of my favorite herbs. Thanks for stopping by.

You had me worried there for a minute TW. After that opening sentence, I had heart palpitations. ;)

After seeing your amazing ravioli recipe, however, I feel revived. They are splendid and much more "T.W." than ravioli in a can. :)

Hi Susan! I just wanted to get your attention with that opening line!