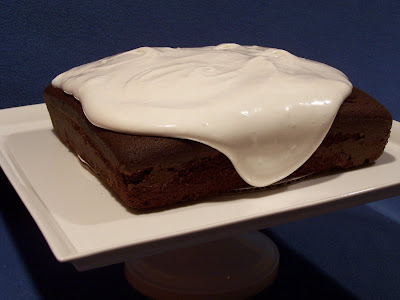 During our high school years, she’d create what amounted to an assembly line atop our white Formica kitchen counter to prepare the daily lunches for me and my three brothers. She would quickly layer a sandwich with Oscar Meyer cold cuts and whole wheat bread (my favorite was bologna with mustard), and gather together precisely-cut celery and carrots with an apple for dessert. All this was carefully stacked inside a brown paper bag that was labeled with our name in black magic marker. The top of the bag was neatly folded over three times and stapled shut. To this day, Mom is still a packaging genius.

The trip to school was a long one, so instead of carrying a beverage, we were given milk money. After years of harboring guilt, I must finally confess that there were many times I did not use the coins to buy milk.

It was a horrific example of teen rebellion. The worst. Even though I was aware of the importance of milk in building strong healthy, bones, I would brazenly walk past the milk case, hand over my loose change to Mrs. Rindethorsen and purchase … yikes … Devil Dogs!

Yes, now the story can be told. Even at the tender age of 15, I was addicted to cake. Oh, I would eat the apple in my sack lunch, but I was also secretly supplementing my pubescent diet with cream-filled cakes.

For the snack cake challenged, here’s a quick primer. A Devil Dog is made of two slender layers of chocolaty, devil’s food cake with cream filling between. It’s sort of a “cake sandwich” in the shape of a hot dog bun. Devil Dogs are sold by the Drake’s Cakes Company based in New Jersey. Founder Newman E. Drake started a business selling pound cake by the slice in Brooklyn in 1888.

Growing up in the 60’s and 70’s we were bombarded by commercial messages for snack cakes – Hostess Twinkies, Hostess Cupcakes, Drake’s Ring Dings and Devil Dogs and Dolly Madison Cakes, which were a longtime sponsor of the Charlie Brown television specials. The competition for our adolescent brand loyalty was fierce. In what has now become a curious case of a corporate confection conglomerate Interstate Bakeries today owns all of the competitor companies – Drake’s Cakes, Hostess Cakes, Twinkies and Dolly Madison Cakes.

What drew me to Devil Dogs, when most of my peers were smoking in the Boy’s Room? Devil Dogs were a soothing, rich respite from the monotony of Earth Science, the mental anguish of Algebra which made my head hurt, or the perils of Chemistry Lab which quite frankly terrified me. Much like Mrs. Kast’s English Literature Class, Devil Dogs fed my restless teenage soul with something sweet and just a bit poetic – at least according to my embryonic view of the world at the time. Devil Dogs gave me a reason to persevere, to slog through Health class and gym, because I knew something luscious and just a bit illicit awaited me at lunch. 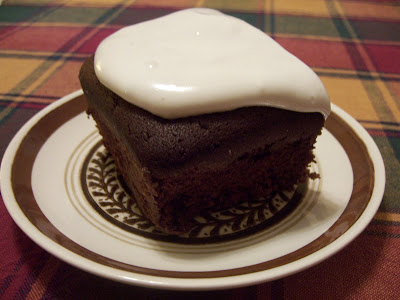 I haven’t eaten a Devil Dog in years, although I have been known to scarf a Twinkie from time to time. So, when the February issue of Gourmet magazine arrives, featuring a recipe for Devil Dog Cake inspired by the original, I can’t resist the urge to bake it. Now, you may ask, Is Gourmet slumming? Let me tell you – anyone who turns up their nose at this recipe because of its humble, mass-produced, mass-marketed snack cake origins is missing a taste of heaven. I’m not quite sure how they managed to capture that true Devil Doggy essence, but it tastes like the genuine article, and ten times better. Ruth Reichl is a genius.

I share a slice with Mom and confess the whole story of the diverted milk funds. After all these years, she deserves to know, and it is good to get it off my chest. Fortunately, Mom is very forgiving, particularly when I’m handing out squares of chocolate cake with marshmallow frosting. And, I didn’t turn out too badly, either. I still eat apples regularly.

I've never had a devil dog and until this issue or Gourmet I had no clue what they were...

What a beautiful ode to the iconic lunch box treat!!

I spent my lunch money on Devil Dogs, too -- until I became addicted to the butterscotch version (were they called Butterscotch Crimpets? I can't quite remember). And (beef) bologna and American cheese sandwiches, with mustard, are still one of my very occasional guilty pleasures -- takes me right back to fifth grade.

Are you sure we don't have the same mother? That lunch sounded exactly like mine, only I liked salami. I also had a weakness for "funny bones" but your devil dog cake would do the job quite well :)

i still love those little chocilate dogs with the cream filling--can you post the recipe please.

Looks scrumpious. I love the frosting on top.

I too must admit that I supplemented Mom's healthy lunches by walking down to the other end of the cafeteria and plunking my money into the candy machine for an Almond Joy bar each afternoon!
Lately I've been enjoying candy bars each day at work again, but keeping my change . . . .

I always chose the Hostess SnoBalls--the ones with the rubbery raspberry/coconut frosting. We rarely brought our lunch from home. We got a dollar every day for lunch money. I spent it on a Dr Pepper, a bag of Cheetohs, a Milky Way and a pack of smokes. A dollar went a long way back then. Occasionally I would blow it all on a bottle of Boone's Farm Apple or Strawberry Hill wine. (Obviously, I had the wrong kind of friends back then.)

The cake looks lovely. I have butter out softening right now and will give it a try in the morning. I hope the frosting will turn out right for me.

Hi T.W! thanks for popping by, it's great being able to catch up with your yummy recipes again:)

Never heard of devil dog before, but it sure looks absolutely irresistible:P

You are not the only one diverting lunch money. I've never heard of devil-dog cake but it sure sounds like its worth it. Plus your mom forgives you anyway. :)

Although I've never had a Devil Dog, I think the cake turned out great! The marshmallow topping was every bit as good as it looked in your picture. Thanks for bringing the recipe to my attention.

Are you sure you're not related to my older brother, Chris? He shares your loved of devil dogs (and Twinkies too, but that's another post). I must admit, I never liked them. Don't hold it against me, though, OK? :)

Brilynn - It's an American classic. I hear you can order them by mail, but try the recipe in Gourmet first!

Cakespy - I may need to give equal time to the Twinkie at some point in the future!

Lydia - I'm going to have to look into the butterscotch version - I do remember that, and all this talk of school lunches has me thinking I'll pick up some bologna this weekend!

Maryann - I was a fan of salami, too, and remember Funny Bones quite well.

Hi Anonymous - the recipe is linked to the word Gourmet in the post.

Helene - the frosting was certainly worth the effort.

Jim - I'm afraid all these true confessions may be too much for our parents! We probably owe them several hundred gallons of milk as payback!

Kathy - I'm thinking of creating a snow ball cake - I think it could be a lot of fun. And on the subject of Boones Farm Apple, you should meet my brother above! So glad the cake worked out for you, too. Isn't it delicious?

Patricia - the best part is there are leftovers too!

Valentina - One more reason for you to visit the United States and try our local cuisine! :-)

Veron - what did you buy with your lunch money? I suppose if the cafeteria had carried macarons, I would have bought that instead ...

Susan - I actually think the cake is much better than what it was inspired by. I wonder what your brother would think?

What a beautifully written and fun post! I love CAKE more than life, and the pic you posted is pretty much my idea of heaven. I live in Paris but the patisserie confections are a bit too elaborate to satisfy my simple cake urge.,,

Mary-Laure - Welcome and thank you so much for your kind words. Considering the confections you have available in Paris I consider your comments very high praise!

I am happy you fessed up with your mom~do you think she ever knew you were not buying the milk?I loved eating those twinkies~always a treat to curl my tongue into that creme filling ~I think you could go into buiness making the devil dog cake-looks delicious!

Oh my Good...ness,
To think I almost missed this post. The flood of memories is only surpassed by the desire to bake this cake; NOW!

Hi Jann - it turns out I started a domino effect, and two of my brothers confessed that they were using their milk money for "confectionary reasons" as well! I think I'd be very happy spending my days surrounded by this cake!

Great twist on the retro theme. And surely you also had Tasty Cakes too? I am surprised that these were available in the school cafeteria -- all the efforts to remove 'things' from the reach of kids' lunch money implies that they have only recently made inroads into the inner sanctum of our schools. Now that my kids are adults, they have been starting sentences with "Mom, you never knew this but..." So universal!

I use to love devil dogs, your version looks much better.

Now that combination sounds perfect to me!