A Luncheon for Presidents’ Day 2008 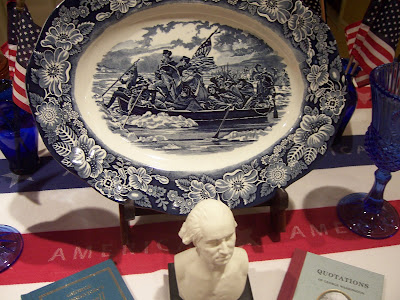 While food is not the first association most make with Presidents’ Day, there is a rich culinary legacy attached to those men who have led our country for more than two centuries. According to the web site for the White House, the home of U.S. presidents for generations, George Washington’s favorite food was ice cream, while Thomas Jefferson adored vegetables. 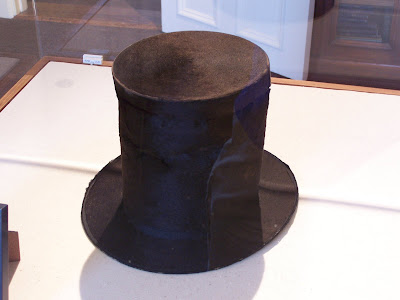 Abraham Lincoln, known for his black stovepipe hat and beard, favored cheese and crackers and fruit salad. President John F. Kennedy, a native of Massachusetts liked New England clam chowder. President Bill Clinton was a fan of McDonald’s Big Macs, and the current resident in the White House is enamored of Mexican food.

Each year I prepare a luncheon for Presidents’ Day to experience some of the foods that were part of our Founding Fathers’ worlds. My menu for 2008 borrows from the table of the Virginia gentry in the early days of the new nation, and the period of national mourning following Abraham Lincoln’s assassination in 1865: 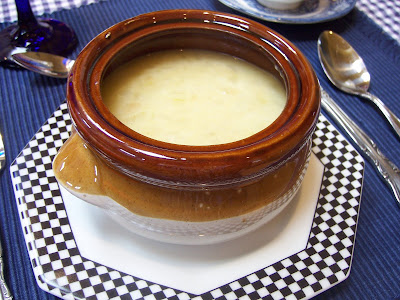 Hannah Glasse was the author of The Art of Cookery Made Plain and Easy, first published in Colonial America in 1747. Glasse was the Martha Stewart of the Colonial era. The Art of Cookery was a highly detailed reference book – both a cookbook and household manual – considered essential in fashionable households of founding families like George and Martha Washington and Thomas Jefferson. Onions were a common ingredient in Colonial homes. An adapted version of the original recipe can be found here. The base of the soup is water, which results in a much lighter taste than the heavier French Onion soups we are accustomed to. Thickened with butter and flour, with a final addition of egg yolk and vinegar, the soup is a creamy chowder and you can really taste the sweetness of the onions. 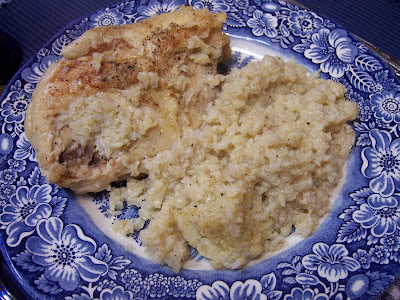 This recipe was believed to be a favorite of the Marquis de Lafayette, the French nobleman and military man who came to the American Colonies to support the Revolution. Lafayette became a lifelong friend of General George Washington, and this casserole of chicken pieces and rice seasoned with salt, pepper and nutmeg was said to have been served during Lafayette’s visits to Washington’s home at Mount Vernon.

The original recipe is just a few lines of text. Careful study reveals is similar to modern recipes for braising. Here’s my more precise version. The chicken is very tender and the rice is fragrant with nutmeg and is a lovely golden color:
Chicken and Rice Lafayette from Mount Vernon

(Adapted from “At the Table in Colonial America” by Patricia B. Mitchell, 1994)

Heat butter and oil in a large heavy skillet over medium high heat until golden and fragrant. Arrange the chicken pieces skin side down in a single layer in the skillet. Fry until chicken is browned on the bottom about 5 minutes. Turn the chicken with tongs and brown on the second side about 5 minutes more. Remove the chicken to a Dutch oven along with any juices. Pour in one cup of hot chicken stock.

Meanwhile, bring one quart of salted water to a boil. Add the rice to the boiling water, and cook for 6 to 7 minutes so that the rice is cooked but not too dry. Drain well and return to the pot. Add 1 tablespoon of butter to the hot rice. Beat eggs with salt, pepper and nutmeg. Beat a small amount of the hot rice mixture into the egg mixture and then slowly add the egg mixture to the rice, beating well and being careful not to curdle the eggs. When combined well, pour rice over chicken and cover the pot. Cook in a 325 degree oven for 45 minutes. Season to taste. 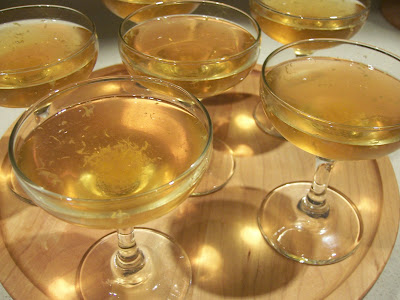 Wealthy colonial households would often present a buffet of sweets, puddings, pastries and jellies to guests. Sugar was an expensive commodity, and a bountiful dessert table was considered a sign of wealth and status. Wine Jelly is a delicate, crystal-clear confection flavored with lemon and sherry. Before the invention of gelatin powder, wine jelly was an elaborate project, with homemade gelatin made from veal bones. A hand-written copy of a wine jelly recipe by Thomas Jefferson still exists. 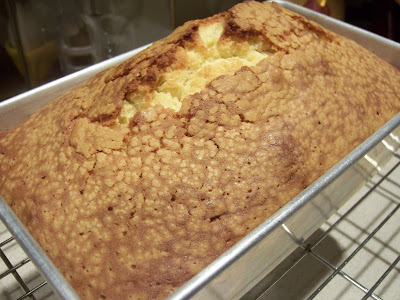 This cake was created to memorialize the death of President Abraham Lincoln and was first published in the popular magazine, Godey’s Lady’s Book in 1865. Sara Josepha Hale was the editor of the magazine, and is well-known as the woman who led a public campaign to institute a national day of Thanksgiving. The recipe was reprinted many times over the years, and is one of a number of “political cakes” named after politicians and war heroes of the North and South that began to appear after the American Civil War. They were, in a sense, a form of culinary rhetoric that supported prominent political figures. The Lincoln Cake is a simple, sweet loaf cake made by creaming eggs, butter, lemon extract and sugar with flour and sweet milk. It is served in slices with butter and jam. It is a curiously plain cake to honor Mr. Lincoln.

This historic recipe proved challenging. The American History Cookbook by Mark H. Zanger contains detailed instructions, yet the cake failed repeatedly. There are some serious inaccuracies in the recipe, and I suspect that the baking temperature of 350 degrees is far too high, as the outer crust was too crisp, leaving the inside of the loaf a gluey mess. I guess recipe testers really didn’t exist during the Civil War. 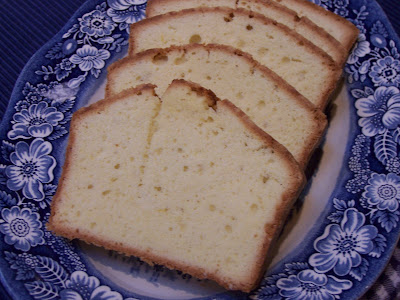 These kinds of incidents do give us a sense of the travails of the Colonial- or Civil War-era home cook. They had none of the directions or precise tools we enjoy today. But at the risk of sounding like a curmudgeon, I got the same distressing result TWICE, even with our modern enhancements. So, I went to the Joy of Cooking, and found a lemon pound cake flavored with mace. Standing in for the Abraham Lincoln cake is “Flo Braker’s Pound Cake.” It came out perfectly (although I am now seriously low on butter and eggs, and after baking three pound cakes in one day, this project was beginning to feel as long as the Civil War). For our celebration, the flavorings match the spirit of its predecessor. This is not without precedent. Most cakes named for historic figures were actually common household recipes before they were elevated to “celebrity status.”

On the luncheon table were several commemorative Presidents Spoons that my family collected when we were growing up. My brothers and I would each want our favorite president put at our place setting at dinner. 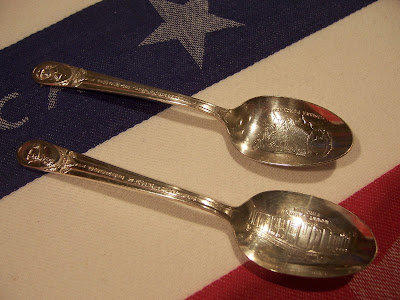 What foods will we associate with future American Presidents? Hillary Clinton already has a rather notorious connection with Chocolate Chip Cookies. Will we be eating Barack Obama’s Chicago Deep Dish Pizza, or John McCain’s recipe for doughnuts in the years ahead? Only time and the national appetite will tell.

Your dinner looks wonderful - and such a great idea to celebrate Presidents' Day this way. What wine did you use for the wine jelly - a dessert wine, I am thinking? That is just what a jelly should be, more like the English jellies are.

I guess a plain cake wuld suit Mr. Lincoln, he being a rather plain fellow.

What a lovely idea to commemorate this holiday. Just be sure to stay away from jelly beans, ketchup and broccoli, if you know what I mean!

Another great food-history lesson! I'm salivating over the chicken and rice dish, seems like quite a dish for this weather. The Clintons must love their cookies, in Sherry yard's new book she has bill clinton cookies...I think they are oatmeal cookies.

What a glorious meal you have presented in honor of Presidents' Day.

Those "bygone" era recipes have a way of taking the science out of cooking. In your case, you have put back some of the art.

My guess, Lincoln would approve.

Hi T.W.
Just dropped in to offer this: I found another recipe from 1865 that appears to have the same method and ingredients as the cake you offered. The oven directions state:
Bake in buttered and floured pan for 1-1/2 hrs. @ 300 degrees. Start in cold oven.

T.W., what a delightful post! Everything looked wonderful, the food and the table setting! I am especially interested in the Lincoln Cake--given my penchant for baked goods and sweets. I'll bake it tomorrow!

Hi Lidian - I used cream sherry, which had a nutty sweet taste. I think you are right about a plain cake for a no-nonsense president.

Lydia - You have a deal! Consider my home a jelly bean/ketchup/broccoli free zone and free of any of the philosophies that go with that!

Maryann - it was a very quick dessert to put together, and I found versions online that contained red wine as well.

Hi Veron - Thanks! I was pleased with the chicken and rice (these historic recipes can be risky) and I'm certain that's the famous Clinton cookie recipe in Sherry Yard's new book.

Cakespy - having now had another helping of wine jelly and Lincoln Cake, I feel empowered to make a presidential proclamation!

Thanks, Louise - I think you found the solution to the botched Lincoln Cake. I think if it had baked more slowly in a cooler oven, it might have worked out.

Manuela - See Louise's instructions above. I hope you have better luck with the original Lincoln Cake recipe. Let me know how it comes out!

I really like that first photo--very festive! The chicken and rice sounds good to me. Three times--I must learn not to give up so easily.

PS--I came back because a thought occurred to me. The Lincoln Hat...kind of looks like a rich, tall chocolate cake! Maybe...just maybe...we could invent a Lincoln Hat Cake! (!).

Kathy - I don't know if I'm extremely patient, or just plain stubborn, but I refuse to be beaten down in my own kitchen!

Cakespy - Your idea is brilliant! I might struggle with a common pound cake, but I'll bet I could come up with a Lincoln Hat Cake! What better way to remember Honest Abe?

I still remember you Pres Day post from last year. And you did it again-- created an engaging food history post! Wine jelly--sounds like an oxymoron, huh? So elegant and playful at the same time. Love it!